From "Tiffany's" to "Khan," we look at Hollywood's illustrious tradition of casting white actors in non-white roles 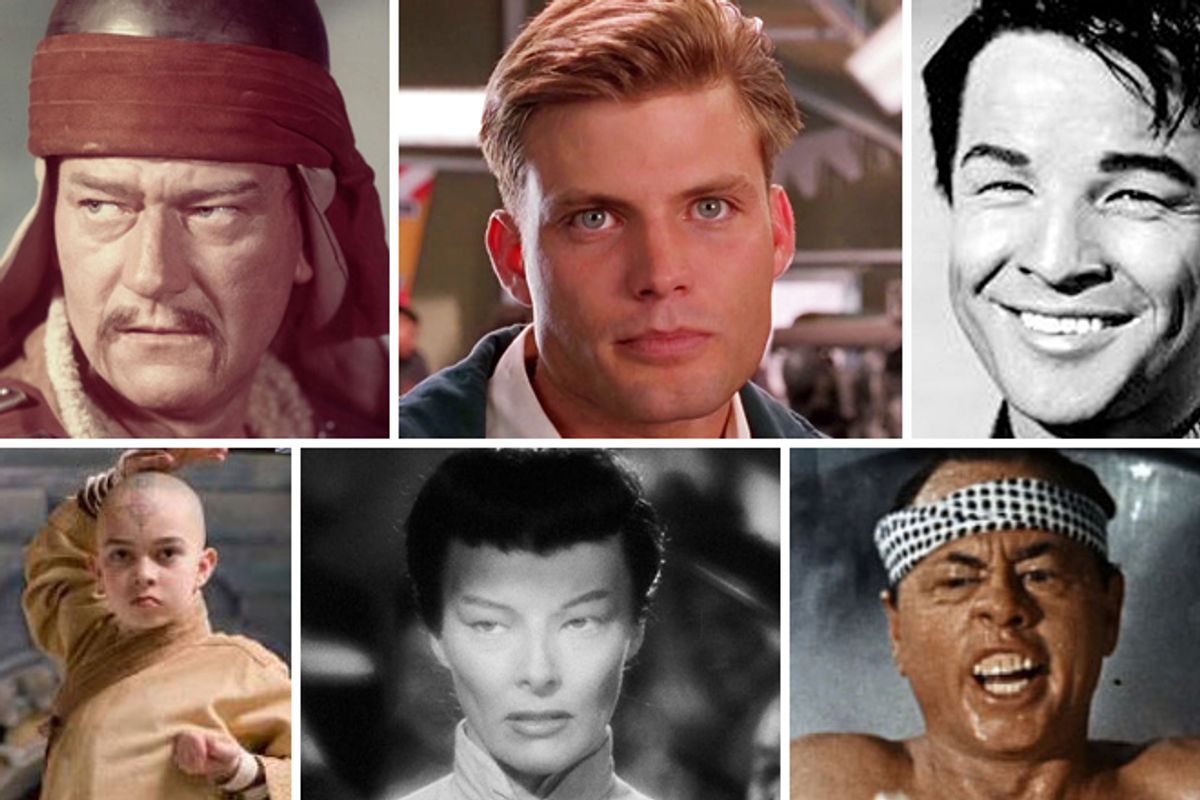 The extraordinary box office success of "The Hunger Games" has launched a heated discussion of Hollywood's peculiar habit of casting white actors in nonwhite roles. Why does this happen? We decided to turn to a very important studio chief for answers -- channeled here by comedian (and "Daily Show" correspondent) Aasif Mandvi.

All I have to say is that whitewashing has been going on since as long as Hollywood has existed -- it's a tradition -- and rather than non-white people complaining about it, they should embrace it. It will make going to the movies so much easier and more fun. But there are just a few things you need to understand.

First, stop watching movies as ethnic people and start watching them as white people. There's nothing that white people like more than seeing other white people in movies and on television. When you go to the movies with your ethnic "judgment" eyes, you miss my point. Watch as a white person, and suddenly your outrage turns to understanding and laughter.

Take a minute to walk to your limousine in my Gucci shoes, and you'll realize that I'm just trying to make people smile. Mickey Rooney with buckteeth and a crazy accent in "Breakfast at Tiffany's"? It's so much funnier than finding a real Chinese actor just talking like himself. Then you'd have to get a screenwriter to actually write genuinely funny lines for that character. You get so much more comedy bang with buckteeth and a funny accent. I mean, it made me laugh. Many people, including myself, were also convinced that Charlton Heston truly was a Mexican/Native American/Egyptian/Ape who talked to God. And I think I convinced a lot of Asians that Genghis Khan really did look like John Wayne back in the '60s. "Short Circuit" was one of my biggest hit movies and I was completely convinced that Fisher Stevens was Indian. Who knew he was a Jewish guy from New York? That accent was spot on!

My point is, I'm not the bad guy. I'm just the rich guy. When you look at it through my studio executive lens, you understand how important it is that both white people and non-white people believe that Indians, Asians, Mexicans and Arabs are truly just white people in brown makeup. I don't like thinking that way. I just don't have the luxury not to. I'm a businessman. White people spend more money on shit than anyone else. (Except on fast food, which is mostly blacks and Mexicans ... at least that's what I have heard. I'm a vegan.) So hey, non-Caucasians, stop buying tacos and start buying Cadillacs.

White people are also cheaper to light than dark-skinned people, and just so you know, you the moviegoer end up paying for that extra cost. Sometimes it's just too unbelievable to cast an ethnic actor. I turned away a lovely Indian actress once who auditioned for the role of a hobbit. I mean there are no Indian hobbits. Audiences would never believe that.

Now, look: I am trying to do the right thing. America has changed and Hollywood should attempt to portray a truer depiction of the ethnic diversity that makes up this country. The fact that many television shows now hire a certain percentage of non-white actors is a step in the right direction, right? I am even prepared to make a deal with you ethnic people out there. Every time you let me cast a non-Caucasian character with a Caucasian actor, I will give you two or three non-white actors in smaller supporting roles. Why not lead roles? Because I'm trying to make a living here. I have spent a lot of time and money throughout history convincing everyone that white is normal. I have even convinced non-white people that white is better, prettier, smarter, stronger, and that only white people can truly be the heroes. Everyone has bought into it, and now you want me to just abandon all my hard work? OK, I will make an exception for some of you non-whites: If you are a hot Latina, you can be the lead. Why? Because white guys want to fuck Jennifer Lopez.

Here are a few more key elements to remember when watching a movie the way white people have been programmed to react. Laugh at the funny accents, because they are funny. Ignore the source material; I'm making movies, I don't give a shit about staying true to your comic books. And ... hold on! Why the fuck is Idris Elba playing a Norse God!?

To view a slide show of Hollywood's egregious moments in white-washing, click on the link below -- and share your own most memorable moments in the comments. (Slide show by Max Rivlin-Nadler)

Aasif Mandvi is an actor and writer who appears as a correspondent on "The Daily Show with Jon Stewart." He also co wrote and stars in the film "Today's Special" and will be appearing this summer in the films "Premium Rush" and "Ruby Sparks."