Jonathan Rauch: "We are a sideshow no longer"

At his first same-sex marriage since Obama's big announcement, a longtime advocate reflects on a decades-long fight 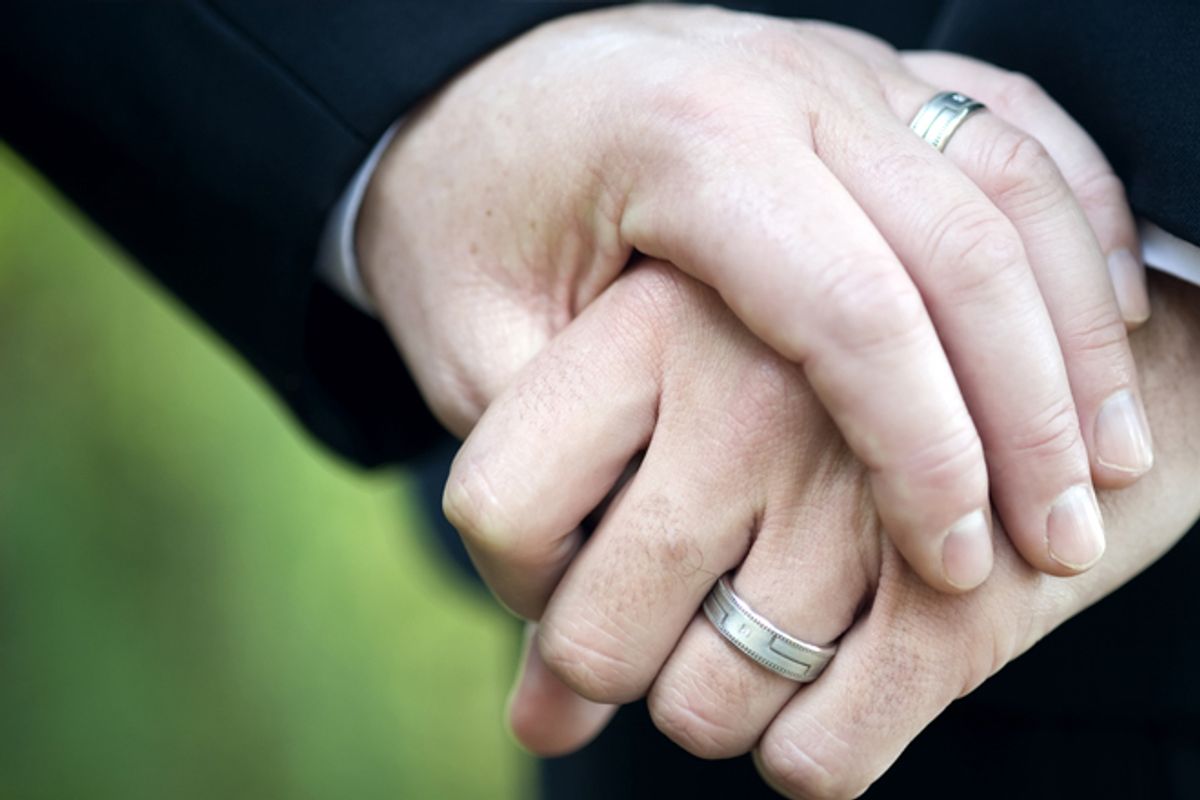 It’s a beautiful spring day in Washington, D.C., around 5 p.m. I am arriving at the august Peterson Institute for International Economics. Today, however, the place is not a think tank but a chapel, and the important words to be uttered are not “trade-weighted exchange rates” but “I do.”

My old friend Joe Gagnon is getting married today to Paul Adamczak, his longtime partner. How I hate that word “partner”! As if Joe and Paul were members of the same law firm. Within the hour, I am pleased to realize, they will be partners no longer. Under District of Columbia law, they will be husbands.

Today’s ceremony is freighted with extra excitement. Only three days ago, President Obama announced his support for same-sex marriage. The subject is much discussed here at the wedding. Of course, as an invitee mentions, Obama’s endorsement alters not a jot of law, not a tittle of policy. Yet a cultural barrier has been crossed, a taboo forever retired. The highest officer in the land and, by extension, his political party and half the country have embraced today’s ceremony as their own. We are a sideshow, an outlier, no longer.

The think tank’s auditorium is transformed by draperies, flowers, gentle lighting, rows of plush chairs. Lovely. It occurs to me, as I reflect on the week’s events, that only one decoration is missing. An American flag would be very much in order.

Chamber musicians play as I take a seat. A few rows ahead of me sits a restless boy, perhaps 8 or 9 years old. My mind pitches back to an earlier time, more than four decades ago, and another boy, about the same age. He is sitting on the piano bench in his house in suburban Phoenix. I remember exactly the spot, exactly the moment, though I could not tell you the date exactly. Suddenly, out of the blue, the boy realizes that he will never be married. He does not know why marriage and family are out of his reach. He will in fact not understand why for almost 20 years, when he comes to understand he is homosexual. But children understand marriage long before they understand sex, and this boy knows, intuitively, that he is different in some way that rules out the kind of life that other people take for granted. He will always be an outsider to family life.

I look again at the boy in front of me and try to imagine what it is like to be him. He will never experience the desolate realization that I had long ago in Phoenix. He will never even be able to comprehend it. The wedding he now witnesses seems ordinary to him. For the whole span of his life, whether he is straight or gay, there will be a destination for his love within the folds of marriage. I find I envy him.

The grooms are walking down the aisle, Joe accompanied by his father, Paul by his mother. In front, two candles are lit for the parents who are not here. I wonder how Joe’s father feels, giving away his son to a man in a legally recognized ceremony. I think back on a conversation with my own father. This is in 1995, not so very long ago, but an eon as it seems today. He is urging me not to write about gay marriage, a subject I will soon take up for the Economist and the New Republic. He knows and accepts that I am gay; that is not the problem. It is my career he is worried about. The idea of a man marrying a man or a woman marrying a woman, he tells me, is such an outlandish idea that if I associate myself with it I will no longer be taken seriously as a writer. People will think I’m a nut. At the time, his prediction seemed plausible.

My gaze alights on one of the absent parents’ candles. My father lived to know and love Michael, who became like another son to him. He lived to see same-sex marriage legalized in Massachusetts and then in several other states. Alas, he died only a few months before Michael and I could legally marry in Washington, D.C. Had he been at our wedding, he would have blessed us, happy to see his prediction proved so blessedly wrong.

The officiant begins the ceremony and the grooms join hands. There are readings from Robert Frost and Plato’s Symposium. Later, Joe will admit to worrying that the readings might seem hackneyed. But the words have their intended effect as my eyes well up. They have an unintended effect, also, as I realize the improbability of what I am witnessing: a thoroughly conventional same-sex wedding.

Earlier that very day, as it happens, I had received an email that was like a bad LSD flashback. Objecting to a recent pro-gay-marriage article of mine, the writer identified himself as a member of the Stonewall generation. “I myself  was active in the Gay Liberation Movement way back in the beginning in the early ’70s and am now horrified by the whole cloying Gay Marriage issue,” he wrote. “It seems deranged that we should now want to ape straights; surely we should continue to do what we’ve always done best: standing aside from, and viewing sardonically, the straight world.”

When I began advocating gay marriage in the mid-1990s, and then well into the new century, I used to hear this kind of objection all the time. A gay couple first attempted to marry in 1970, just a few months after the famous riots outside the Stonewall Bar in New York City; but marriage was not then taken up by the gay-rights movement. Matrimony seemed not only out of reach but out of touch with the liberationist, libertine ethos of the time. We were supposed to be breaking the fetters of conventionality, reinventing sexuality and ourselves.

But then came the plague, and the discovery, too often, that we had only each other for family, yet we had none of the tools to care for one another that families need. We could not enter the hospital room; sometimes, we could not even enter the country. We would use our bodies to warm our shuddering “lover” (such was the term in those days — even worse than “partner”). We would hand-feed him as he wasted. Then, when he passed, we would be sent packing by the relatives who had never known or cared we existed.

Never again, we said. That was when we understood that real liberation lies in family’s embrace, not its rejection. Triple-drug HIV therapy and the gay-marriage movement arrived almost simultaneously. No coincidence, that.

Conservatives worry that gay participation will change marriage for the worse. Gay-liberationists (the few that remain) worry it will change gays for the worse. I wish they could all be here, as the grooms take their vows, to see how marriage has changed gays for the better. The ancient words wash over me. To have and to hold ... for better for worse ... until death do us part. These are words with the power not only to turn unrelated individuals into next of kin, to bond their extended families, to shelter their children, and to build communities; they are words that have reformed, and indeed re-formed, an entire culture.

As I sit here, I cannot help feeling vindicated by the rage of that aging gay objector. He has lost. It is over. Gays have not claimed marriage; it has claimed us.

The couple, now husbands, are returning down the aisle amid a commotion of hugs and smiles. Now there will be a cocktail reception, then a dinner, then a honeymoon — in Disney World, no less. It occurs to me that I have never seen so traditional and comfortingly familiar an occasion. It occurs to me that to be alive just now, seeing what I am seeing, is a miracle. The air around us is thick with the spirits of long-passed homosexual men and women, so many of them tormented and persecuted, who could never have dreamt of this future.

As I pass a multi-tiered wedding cake, I suddenly wish I could rectify a blunder. A couple of days earlier, in a radio interview, an interviewer asked me how I felt, as a gay man, about Obama’s announcement. I had been expecting to talk about politics and polls, not myself. Caught off guard, I rambled about being pleased and surprised and whatnot. Only now do I realize that the right answer was a single word. “Grateful,” I should have said. “I feel grateful.”

I kick myself. Why does one always think of the right answer when it’s too late? But the reproach barely registers before I am lost in the happy glow of sunshine and champagne.