Why do conservatives hate freedom? 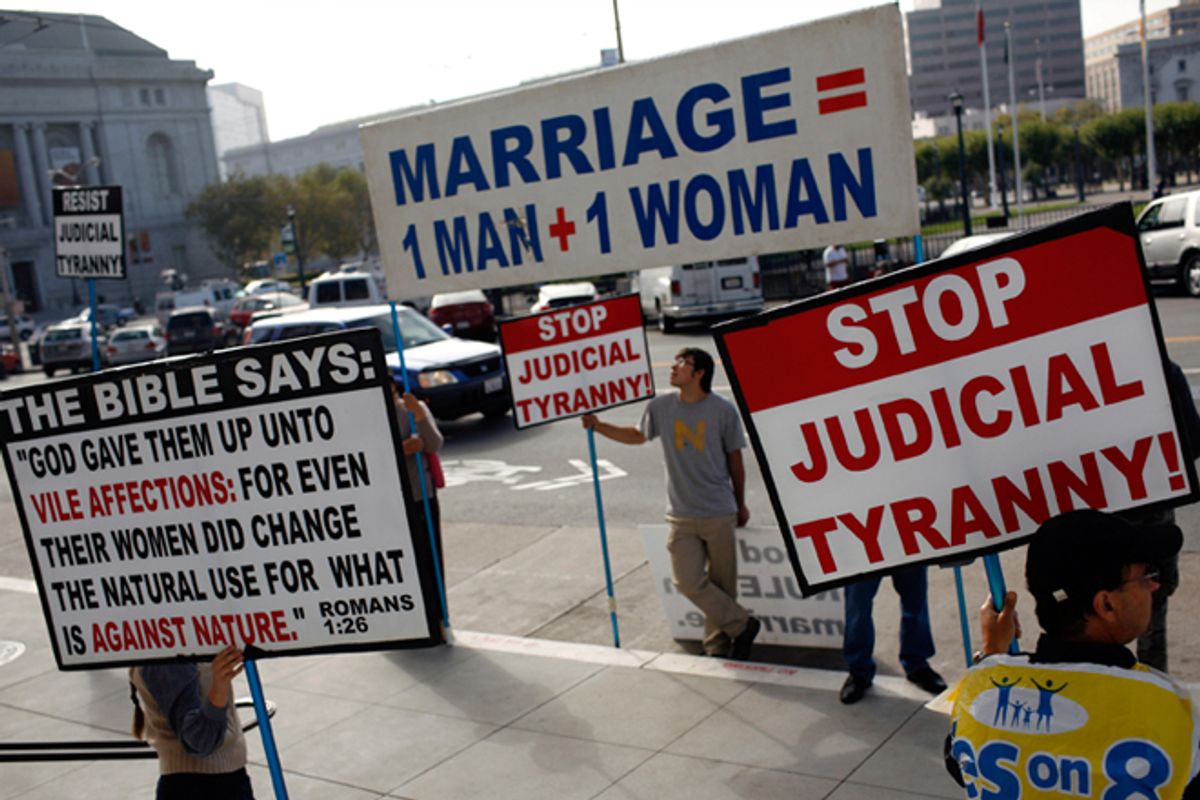 Why do conservatives hate freedom? The question may be startling. After all, don’t conservatives claim they are protecting liberty in America against liberal statism, which they compare to communism or fascism? But the conservative idea of “freedom” is a very peculiar one, which excludes virtually every kind of liberty that ordinary Americans take for granted.

During the civil rights era, the leading conservative politician, Barry Goldwater, and the leading conservative intellectual, William F. Buckley Jr., along with most of their followers opposed federal laws banning racial discrimination. To their credit, they later admitted they had been mistaken; indeed, both Buckley and Goldwater supported gay rights late in their careers. But at the time that conservative support for a color-blind society might have made a difference, the leaders of American conservatism sided with the Southern segregationists. They claimed they did so, not because of racial prejudice, but because they feared federal tyranny — a weaselly stance that, in practice, made them side with white supremacist tyranny at the state level. If they had truly believed in their own propaganda about federalism, conservatives could have opposed federal civil rights legislation while campaigning for civil rights laws at the state level. They didn’t.

The civil rights revolution was followed by the sexual revolution. Here again, conservatives, as distinct from libertarians, were on the side of government repression. The mainstream conservative movement opposed the legalization of contraceptives and abortion. In this case, unlike in the case of civil rights, the American right did not even pretend to have constitutional reasons for opposing Supreme Court decisions like Griswold v. Connecticut in 1965 (which struck down state bans on the use of contraception, including by married couples) or Roe v. Wade  in 1973 (which struck down state bans on most abortion). The mainstream right simply argued that conservative Christian beliefs about sexual morality should be incorporated into law. In other words, the very conservatives warning us about the dangers of “mobocracy” when it came to the welfare state had no objection to using the power of government to force their fellow citizens to live their private lives according to the teachings of Thomas Aquinas or the Book of Leviticus, as interpreted by semi-literate Southern Protestant preachers.

The conservative campaign against gay rights is equally impossible to justify, in terms of America’s Founding philosophy of natural rights. Unable to come up with any Lockean liberal reason why citizens of a democratic republic should be discriminated against, on the basis of their sexual orientations, conservatives are forced to cite the Bible or thousands of years of tradition. The whole point of the American Founding, however, was to establish a regime that was not based, like the pre-modern monarchies of  Europe, on revealed religion or ancient custom. In the words of Gen. George Washington in his circular to the states, shortly after victory in the American war of independence:

The foundation of our Empire was not laid in the gloomy age of Ignorance and Superstition, but at an Epocha when the rights of mankind were better understood and more clearly defined, than at any former period, the researches of the human mind, after social happiness, have been carried to a great extent, the Treasures of knowledge, acquired by the labours of Philosophers, Sages and Legislatures, through a long succession of years, are laid open for our use, and their collected wisdom may be happily applied in the Establishment of our forms of Government…

A theocratic or tribalist Right that argues for public policies by invoking divine revelation to some ancient prophet or immemorial custom dating back to “the gloomy age of Ignorance and Superstition,” is profoundly, radically un-American.
In the cases of freedom from racial discrimination and freedom from sexual repression, American conservatives have been solidly on the side of government repression of the powerless and unprivileged. The same is true with respect to workers’ rights, debtors’ rights and criminal rights.

To listen to their Jacksonian rhetoric, American conservatives are the champions of the little guy against the “elites.” But not, it appears, in the workplace or the bank. The American right is opposed to anything — minimum wage laws, unions, workplace regulations — that would increase the bargaining power of workers relative to their bosses.

And what about debtors? Genuine Jeffersonians and Jacksonians have usually sided with working-class debtors against upper-class creditors.  Not American conservatives.  They supported laws making it harder for families crippled by medical bills to declare bankruptcy. The Tea Party was mobilized in part by opposition to proposals to restructure the debt of homeowners who are “underwater” with their mortgages. And — best of all — the very same American right that wants to impose Catholic or  Old Testament sexual morals in the bedroom opposes Catholic and  Old Testament teachings about the need to limit usury.

Last but not least is the appallingly authoritarian conservative record in the realm of criminal rights. If American conservatives really believed their talk about the threat of government tyranny and government incompetence, they would unanimously oppose the death penalty. Nothing could illustrate arbitrary, despotic government power more than the possibility that execution might depend on the vagaries of jury selection or the incompetence of state-appointed legal counsel. And yet when it comes to the death penalty, American conservatives abruptly forget their qualms about state power in its most lethal form. The same conservative movement that claims that government cannot be trusted to run the postal system or administer Social Security insists that wise and flawless government never applies the death penalty to the guilty inconsistently and never executes an innocent person by mistake.

What would America look like, if conservatives had won their battles against American liberty in the last half-century?  Formal racial segregation might still exist at the state and local level in the South. In some states, it would be illegal to obtain abortions or even for married couples to use contraception. In much of the United States, gays and lesbians would still be treated as criminals. Government would dictate to Americans with whom and how they can have sex. Unions would have been completely annihilated in the public as well as the private sector. Wages and hours laws would be abolished, so that employers could pay third-world wages to Americans working seven days a week, 12 hours a day, as many did before the New Deal. There would be far more executions and far fewer procedural safeguards to ensure that the lives of innocent Americans are not ended mistakenly by the state.

That is the America that the American right for the last few generations has fought for. Freedom has nothing to do with it.