America's weight problem is only getting worse. Here's how we can fix it 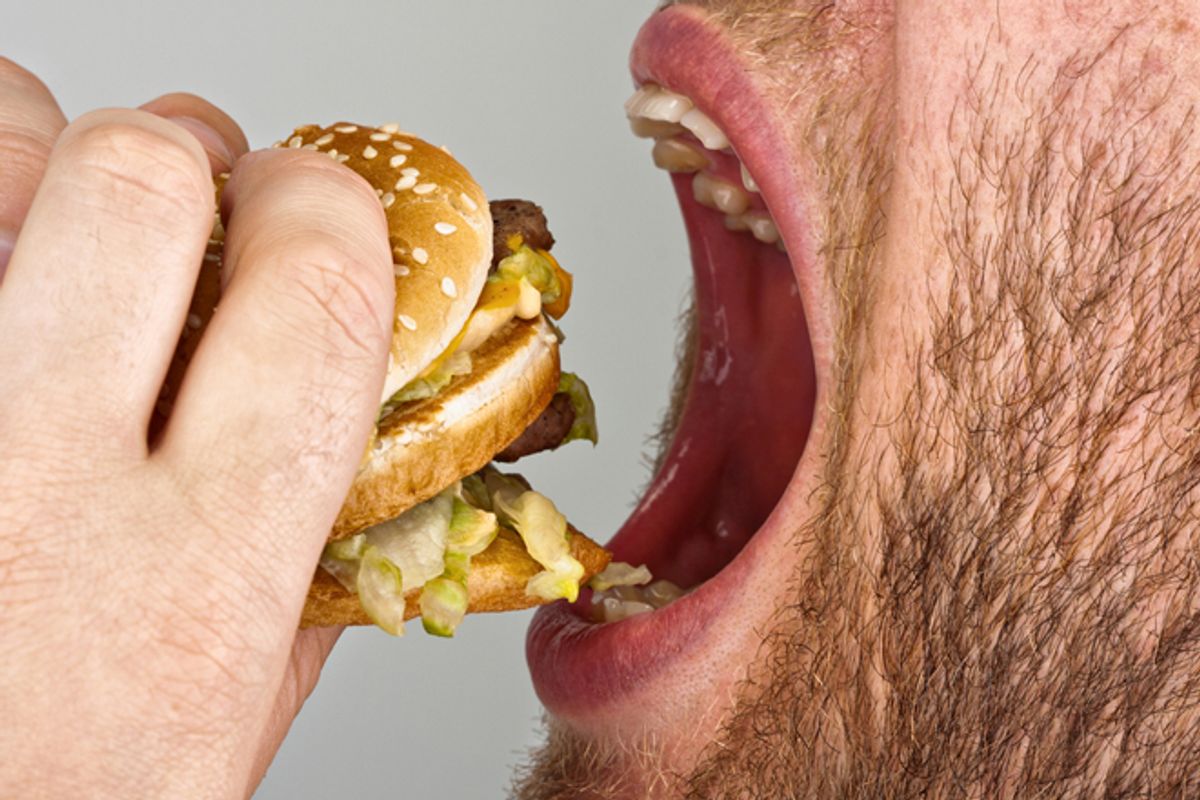 If Benjamin Franklin was writing his famous letter to Jean-Baptiste Leroy today, his famous aphorism might read: "In this world nothing can be said to be certain, except death, taxes and the obesity crisis." It seems no matter the year or the season, that crisis inexorably continues, with experts now saying 42 percent of Americans will be obese by 2030. And whether you are one of the 42 percent or not, that trend is going to affect you, because it is expected to cost the country roughly half a trillion (yes, trillion) in additional healthcare costs.

And yet, as relentless as the obesity crisis appears to be, its expansion doesn't have to be a foregone conclusion. That's because, unlike a naturally occurring epidemic, it's almost completely human created -- a reality that allows for the possibility of a human-directed reversal.

What does such a reversal require in practice? First and foremost, awareness, and thanks to everything from Michelle Obama's fitness campaign to HBO's new documentary "The Weight of a Nation," that prerequisite is finally starting to be met. But then what? As GI Joe said, "knowing is half the battle" -- but it's only half. Once more of us are aware of the emergency at hand, what will be the most reliable way to address the problem?

In an instant gratification culture obsessed with extreme makeovers and get-thin-quick diet schemes, it's easy to feel confused about a path forward. But a tranche of new science, data and public policy proposals that cut through the fog of misinformation suggests that path is there -- if we're willing to take it. Here are five of the most promising ways forward.

Over the last four decades, we went from spending $3 billion a year on fast food to $110 billion a year on fast food. At the same time, there's been an explosion in the amount of chemically enhanced, calorie-packed processed foods Americans eat at home, at work and in the school cafeteria. Not surprisingly, in predictable cause-and-effect fashion, this has all happened as obesity became a public health epidemic.

The response from some policymakers has been to champion junk-food taxes, initiatives whose supreme press-release-worthiness can make them seem a bit gimmicky, but whose merits are nonetheless rooted in substance. Indeed, a bevy of new studies show that such levies, when structured properly, can disincentivize junk food consumption on a large scale.

In one University of North Carolina study, ABC News reports that "Patients got significantly less of their calories from soda or pizza when there was a 10 percent increase in the price of either." In another study of college-age adults, "researchers found that the students generally bought fewer lunchtime calories when sugary, high-fat fare came with a tax of 25 percent or more." In yet another study, this one from the University of Buffalo, it was much the same result: Higher taxes meant more healthy consumer choices.

New York Times food columnist Mark Bittman has noted that while taxes alone won't solve the obesity crisis, they are an important part of a multifaceted attack on the problem -- and they will also raise much-needed public revenues at a time of crushing deficits:

A study by Y. Claire Wang, an assistant professor at Columbia’s Mailman School of Public Health, predicted that a penny tax per ounce on sugar-sweetened beverages in New York State would save $3 billion in health care costs over the course of a decade, prevent something like 37,000 cases of diabetes and bring in $1 billion annually. Another study shows that a two-cent tax per ounce in Illinois would reduce obesity in youth by 18 percent, save nearly $350 million and bring in over $800 million taxes annually. Scaled nationally, as it should be, the projected benefits are even more impressive; one study suggests that a national penny-per-ounce tax on sugar-sweetened beverages would generate at least $13 billion a year in income while cutting consumption by 24 percent...A 20 percent increase in the price of sugary drinks nationally could result in about a 20 percent decrease in consumption, which in the next decade could prevent 1.5 million Americans from becoming obese and 400,000 cases of diabetes, saving about $30 billion.

Put it all together, and junk food taxes should be about as close to a no-brainer as you'll find in the public policy arena.

There's no scientific reason junk food should cost less than whole grains, fruits and vegetables. After all, the former are the product of a mechanized process relying on an entire industrial system, while the later can be grown directly out of the ground by almost anyone.

Yet, junk food consistently beats natural foods in the price competition. Why? It's all about the subsidies.

As a the U.S. Public Interest Research Group's "Apples to Twinkies" report shows, your taxpayer dollars subsidize junk food and artificially deflate the cost of that junk food so that it undersells everything else. "Between 1995 and 2010, $16.9 billion in tax dollars subsidized four common food additives—corn syrup, high fructose corn syrup, corn starch, and soy oils." At the same time, PIRG points out that "taxpayers spent only $262 million subsidizing apples, which is the only significant federal subsidy of fresh fruits or vegetables." To put those numbers into real-world terms, "if these agricultural subsidies went directly to consumers to allow them to purchase food, each of America’s 144 million taxpayers would be given $7.36 to spend on junk food and 11 cents with which to buy apples each year -- enough to buy 19 Twinkies but less than a quarter of one Red Delicious apple apiece."

While studies show that changing this subsidy structure would be no cure-all for obesity, there's no evidence to suggest that keeping it in place does anything but make the obesity crisis worse -- and there is evidence that changing the subsidies would make things better. This isn't surprising; it's basic economics.

Think about it: If subsidies for commodity crops that create junk food were redirected into subsidies for natural foods, it would radically change the market incentives for healthful eating. Sans the subsidies, industrial food corporations would no longer be able to price processed foods at artificially lower prices than their natural competitors. Instead, healthful foods would have the price advantage -- and, quite likely, bigger market share.

The Obama administration has been trying to reduce the amount of obesogenic foods in school cafeterias, under the theory that stopping obesity-inducing eating habits at an early age might stop the obesity crisis in its tracks. It's been an uphill fight. According to the Associated Press in February, "Junk food remains plentiful at the nation's elementary schools," with "nearly half of public and private schools surveyed sold sweet or salty snack foods in vending machines or other places."

Five years after California started cracking down on junk food in school cafeterias, a new report shows that high school students there consume fewer calories and less fat and sugar at school than students in other states...The study found that California high school students consumed on average nearly 160 calories fewer per day than students in other states, the equivalent of cutting out a small bag of potato chips. That difference came largely from reduced calorie consumption at school, and there was no evidence that students were compensating for their limited access to junk food at school by eating more at home...

To study the effect of this policy, the researchers examined data from the Centers for Disease Control and Prevention on the eating habits of high school students in California, comparing it with data on students from 14 states that did not have nutrition standards for vending machine snacks and other foods sold outside of school lunches and other meal plans...California students had the lowest daily intake of calories, fat and, especially, added sugars.

In light of this, it's hard to imagine anyone still defending the American school system's role as glorified junk food machines.

In his endorsement of the campaign to legalize gay marriage, Vice President Joe Biden said that "when things really began to change is when the social culture changes ... I think Will & Grace probably did more to educate the American public than almost anybody’s ever done so far." It was an acknowledgment that televisual images often play as big a role in our society as ironclad policies -- and the same truism relates to the obesity crisis.

Today, our political culture regularly equates unhealthy eating habits to Americanness and authenticity. As evidence, recall that the party nomination fights have become a kind of televised eating contest, with candidates trying to one-up their competitors with photo ops stuffing corn dogs and cheesesteaks.

The committee now has a White House petition calling on the president to stop undermining his wife's crusade against obesity and end such photo ops. It's the least the administration can do.

5. Start Broadening Our Understanding of Obesity

Conventional wisdom holds that a calorie is a calorie, and that if Americans simply take in fewer calories and use more via exercise, obesity can be stopped. But journalist Gary Taubes reports that science now suggests that this formula may be fundamentally flawed -- that obesity is a product of specific kinds of calories from sucrose and fructose:

There is an alternative theory, one that has also been around for decades but that the establishment has largely ignored. This theory implicates specific foods—refined sugars and grains—because of their effect on the hormone insulin, which regulates fat accumulation. If this hormonal-defect hypothesis is true, not all calories are created equal...

Sucrose and high-fructose corn syrup have a unique chemical composition, a near 50-50 combination of two different carbohydrates: glucose and fructose. And while glucose is metabolized by virtually every cell in the body, the fructose is metabolized mostly by liver cells. From there, the chain of metabolic events has been worked out by biochemists over 50 years: some of the fructose is converted into fat, the fat accumulates in the liver cells, which become resistant to the action of insulin, and so more insulin is secreted to compensate. The end results are elevated levels of insulin, which is the hallmark of type 2 diabetes, and the steady accumulation of fat in our fat tissue—a few tens of calories worth per day, leading to pounds per year, and obesity over the course of a few decades.

He goes on to note that "back in the 1980s, the FDA gave sugar a free pass based on the idea that the evidence wasn’t conclusive" -- but that now, the evidence can't be ignored.

This isn't to say that the theories about sugar are 100 percent correct; it is only to point out that if we are going to reduce our consumption of junk food in order to stop the obesity epidemic, we need a better understanding of exactly what junk food is. That means broadening our understanding of obesity's roots and rejecting the reductionism that says simply that "a calorie is a calorie."