According to media reports, July 9 will be our online apocalypse. The better story is how this crazy rumor started 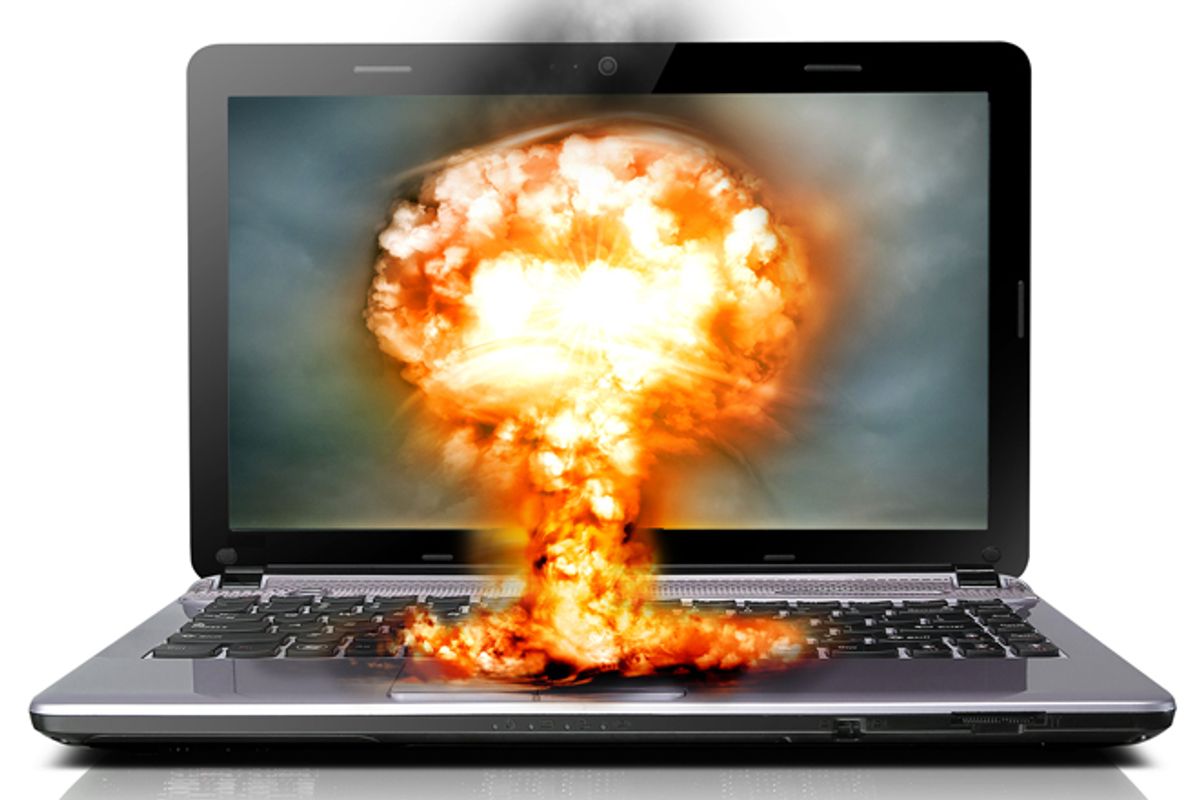 The apocalyptic story line was once reserved for truly apocalyptic events. Nuclear war. The return of Christ. Environmental or economic collapse. But it’s 2012, and the apocalypse has become the basis for everything from Super Bowl commercials to summer romantic comedies -- and no media story is too small to have an apocalyptic moniker attached to it. (Remember Snowmageddon?) If you want to get the world’s attention, simply proclaim that the world will soon end -- or the Internet. Just read coverage of the so-called Internet Doomsday virus, which will supposedly strike and shut down the Web on July 9.

Here's how the story got started. Back in October, the FBI announced that it had broken up an international crime ring when it arrested six Estonians in what was then heralded as “the biggest cyber criminal takedown in history.” The Estonians had, over the course of four years, hijacked more than 4 million computers in 100 countries through the use of malware known as DNSChanger. By redirecting the infected browsers of unwitting users, DNSChanger was able to send high volumes of traffic to the criminal ring’s rogue websites and servers, collecting more than $14 million in fraudulent advertising revenue and exposing their victims to information theft in the process.

“Operation Ghost Click” (as the FBI dubbed its sting operation) put an end to the Estonian scheme, but a problem remained. If the feds simply shut down the Estonian servers, the 4 million infected machines -- nearly 1 million of which were in the United States -- would be unable to reach the Internet. To give the cyber-crime victims time to clean up their machines, the FBI contracted the Internet Systems Consortium (ISC) to maintain valid servers in place of the criminal servers. The new servers would remain online until March 8, 2012.

And so it came to pass that the FBI tried to warn the people, but the people were not listening. The people were too busy swatting the pop-up ads that buzzed like flies around TMZ.

As things turned out, a cabal of Estonian thieves in an international crime ring wasn’t enough to get the public’s attention. By early February, nearly half of all Fortune 500 companies and half of all major federal agencies still had computers infected with the virus -- along with 400,000 other computers around the world. If the government shut down its proxy servers on March 8, as was planned, all of these computers would be unable to access the Internet. (The FBI, frankly, hadn’t done the best job in getting the word out about DNSChanger: It slapped up a PDF on the Web and assumed people would find it.)

And then it happened. Somebody put two and two together. There was a larger, more familiar narrative at work here. The tale of Operation Ghost Click and DNSChanger held all the elements of a familiar story. A set date. The need for the wayward computer users to repent before the date came. The smug satisfaction that when the date finally came, the non-believers would be cast into a disconnected hell, with nary a Google Map to lead them out of it. Have you not accepted Norton AntiVirus as your savior? IT nerds across the nation waved their MacBooks in contemptuous indignation.

This wasn’t just any old computer virus. For those who did not repent -- or at least scan their computers for the virus -- March 8 would be INTERNET DOOMSDAY.

Let's back up for a moment: "Doomsday?" one might ask. Really? Some accountant at Hormel might not be able to access the Internet one day because of slovenly security habits, and that becomes doomsday? Has the apocalyptic bar really been set that low?

In fact, it has -- and there are three reasons for this.

Understanding the first reason requires a quick trip back to the last time apocalyptic rhetoric was as mainstream as it is today -- the 1970s, when the country was buffeted by oil shocks, stagflation, Watergate, spiraling crime, inner-city decay, and defeat in Vietnam. A paranoid and pun-filled tome soon emerged to explain the chaos as signs of the end of the world -- Hal Lindsey’s "The Late Great Planet Earth," the “No. 1 nonfiction seller of the decade” (as the New York Times put it), which found its way onto the bookshelves of more than 15 million Americans. And now the teens and 20-somethings who had clutched copies of "The Late Great Planet Earth" in the 1970s are editors, writers and producers, and they bring to the media landscape the narrative of their youth, in much the same way that indie music from the 1980s and '90s, which never sold very well at the time, has reached a wider audience in the 2000s as Gen Xers find themselves program directors at radio stations or music supervisors at ad agencies and television networks.

The second reason came at the dawn of the next decade, with the launch of CNN in 1980. The rise of cable news (and, in the late '90s and early 2000s, the rise of the Internet) didn’t merely transform the media landscape; it exponentially expanded it. Prior to 1980, the “Big 3” networks — ABC, CBS and NBC — programmed little more than three hours of news per day. Nowadays, even the “24-hour news cycle” seems like an antiquated idea; Twitter has brought us the 24-minute news cycle, with reporters on their Tweetdecks chasing headlines like little kids playing soccer. In this new media landscape, where speed and hyperbole trump investigation and accuracy, apocalyptic headlines draw the all-important consumer eyeball, regardless of the story that runs beneath.

The third reason that we so readily embrace the apocalyptic story line -- not merely as producers of news, but as consumers -- can be found in the decade behind us. As we’ve written before, the first decade of the 21st century was a decade punctuated by historic events that seemed (or were treated as) nearly apocalyptic in scope. From preparations for Y2K to the attacks of Sept. 11, from rising evidence that climate change has arrived to the economic collapse of 2008 in which we still find ourselves entangled, the belief that the world is coming undone -- that the final straw is just moments away from being lowered onto the camel’s back -- has surged from the edges of conspiracy and into the center of our public discourse.

The problem with this arms race toward the ever more apocalyptic is that it depletes our reservoirs of concern. If everything is an apocalyptic threat, then nothing is. And when each overhyped threat passes with nothing happening -- where are you now, Ebola virus? -- we find ourselves more capable of dismissing real concerns like climate change as overhyped as well.

We called the FBI Press Office to ask them why they were trying to frighten people with their overheated rhetoric about “doomsday.” Didn’t they know that small children also used the Internet, and might be haunted by nightmares of never feeding their Moshi Monsters again? “I don’t think we’ve ever used that word,” the press officer who answered at FBI headquarters assured us. “We’ve never called it ‘Internet doomsday.’”

Ever since Y2K, the media has mastered the technique of combining any potential threat -- no matter how remote the probability and no matter how localized or contained its likely impact -- with the apocalyptic story line. The result has been an increasing hyperbole in the news, and an endless parade of stories that imagine the “end of the world” in the most unlikely of scenarios, from solar flares to polar shifts to ... well, some get-rich-quick scheme cooked up by some hoodlums in Estonia.

Take, as another example, the headlines in March that warned us that an impending solar flare could knock out most of our satellite communications, GPS and utilities, plunging the world into unplugged chaos. Beneath the headlines, usually in the final paragraph, was a little-noticed caveat: Such flares occurred with regularity a decade ago, with virtually zero impact.

But it’s the headlines that matter, not the details or the subsequent paragraphs, and “Internet Doomsday” was a great headline. The blogs lit up with stories about the horrors that might befall us if we couldn’t access Gawker. And like all good apocalyptic narratives, the Internet Doomsday quickly took a turn toward the conspiratorial: The FBI itself was going to pull the plug on the Internet on March 8, it was said. Government efforts to protect computer users had become a government plot to unplug computer users. There was much logging on, and rumors of not logging on.

But this was not yet the end. A judge, apparently consulting with Harold Camping (who knew much about the flexibility of having a backup date for the apocalypse), ordered the FBI to keep its goodly proxy servers going for another 120 days, until July 9, to give the unrepentant more time to download Kaspersky. And the FBI became more Internet savvy: A few weeks ago, it unveiled a new website where computer users could check to see if their computers were infected with DNSChanger.

The press dutifully reported on the FBI’s valiant effort to help the remaining victims of the scam -- perhaps 200,000 out of 2.3 billion Internet users in the world -- repair their computers. The most common headline? You guessed it: “Internet Doomsday Coming July 9.”

Mel Gilles is a writer and a former advocate for victims of domestic abuse. Her essay, "The Politics of Victimization," went viral in 2004, reaching more than 2 million readers.

Mathew Gross is considered one of America's top new-media strategists. Together with Mel Gilles he is the author of "The Last Myth".