There's an ongoing war for the future of Republican foreign policy 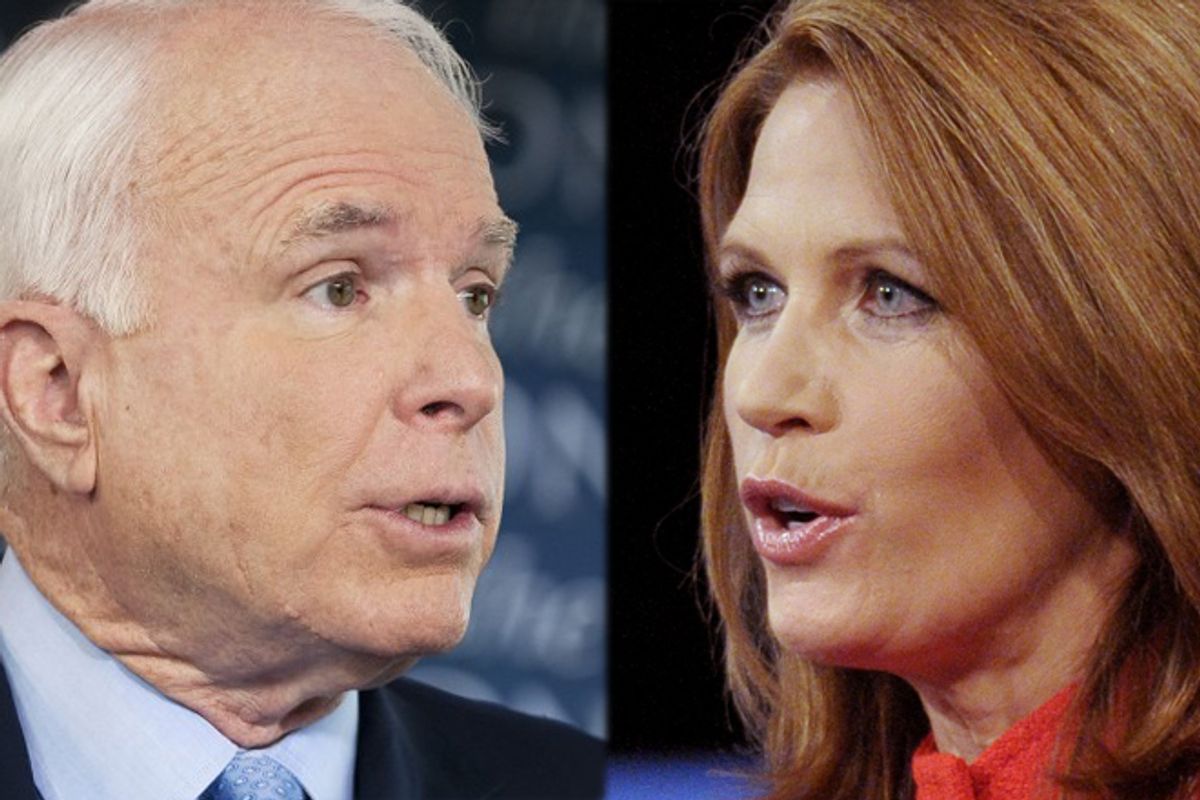 The Muslim Brotherhood, a group that was once thought virtually extinct in Syria, has surprised everyone by staging a comeback.  The Islamist group is, according to Reuters, a "dominant force" in the Syrian opposition. Similarly, in Egypt, the MB has become perhaps the most powerful group in the wake of the Revolution.

This doesn't sit well with everyone in the American conservative movement, and two factions are vying to define the Republican response to the increased power of political Islam. Leading what might be called the 'to-hell-with-democracy’ strain of thought is Andrew McCarthy, a national-security columnist for National Review and senior fellow at the Foundation for Defense of Democracies. McCarthy has been relentless in arguing that the MB poses a major threat to America, and that it must be opposed at all costs. McCarthy called Republican Sens. Lindsey Graham and John McCain “the useful-idiot brigade” for meeting with MB members in Egypt. He accused the senators of “helping install an Islamist government in Libya” that he says is composed of al-Qaida members.

McCarthy’s perspective opposes democracy in the Middle East because it could bring parties to power that are less friendly to the United States. It has echoes in the views of Walid Phares, an important advisor to Mitt Romney. Phares said in March that the “Islamist lobby directs U.S. policy in Egypt, Libya, Tunisia and the Middle East.” He told the far-right Newsmax that the Obama administration is creating an “Islamist state” in Egypt.

Other important individuals in the to-hell-with-democracy movement include John Bolton, who is rumored to be up for a top spot in a Romney administration, and who says that Egyptian democracy is bad news; Michele Bachmann, who criticized Obama for not standing by Egyptian dictator Hosni Mubarak; and Frank Gaffney, a former Reagan administration official and head of a right-wing think tank.

There is another faction among the right-wing that is equally powerful, however: the neoconservatives. For the most part, the neocons have embraced the upheaval in the Middle East. “The key is whether a government in Egypt or Tunisia respects the democratic process and doesn’t try to subvert the system,” says Jamie Fly, executive director of the Foreign Policy Initiative, a neocon think tank. “The jury is still out on that, and I think we have to let the process continue and see what comes of it.” Fly believes that there are differing views on Israel and the United States within the MB, and the democratic voices should be encouraged. The organization has urged military intervention in Syria to bolster democratic forces. FPI’s board of directors includes Robert Kagan, an advisor to both presidential candidates, and Dan Senor, an official in the Bush administration. “Paula Dobriansky, leading advocate of Bush’s ill-fated ‘freedom agenda’ as an official in the State Department, recently joined the Romney campaign full time,” the Nation’s Ari Berman reportedly recently. McCain and Graham are similarly bullish on Middle East democracy, rather admirably insisting that the Muslim Brotherhood be given a chance. Even former President George W. Bush has come down on the side of letting the revolutions run their course.

Both factions are vying for the ear of Mitt Romney, and control of the conversation. But the conservative split has its roots not in the era of Middle East upheaval but in the 1980s. During the Cold War, Ambassador to the U.N. Jeane Kirkpatrick famously made the distinction between right-wing dictatorships that could evolve into democracies and therefore should be supported, and left-wing ones that needed to be combated. In truth, Kirkpatrick’s thesis was merely a rationalization for opposing communist governments because they were thought to be inimical to U.S. interests. Ronald Reagan was so impressed with the analysis that he brought her into his Cabinet. And indeed, Reagan’s policy reflected the Kirkpatrick doctrine, as the administration supported brutal right-wing regimes across Central America. At the same time, Reagan provided crucial support for Solidarity in Poland, the movement that was instrumental in taking down the Soviet regime. Czech dissident Vaclav Havel similarly praised Reagan’s anti-Soviet policy.

Conservatives believe both approaches — supporting democratic and anti-democratic anti-Communist movements — were vital in defeating the Soviet Union. And so now they are divided between supporting pro-American dictators in the Middle East, and supporting democracy movements. Both worked against the Communists, they believe. But in, say, Egypt, one cannot support democracy while opposing the MB. Hence the split between the factions in the conservative movement. Which one triumphs in a prospective Romney administration may set the course of U.S. foreign policy for decades to come.