The cult libertarian hero keeps his campaign alive, barely, as he prepares to hand the reins to his son 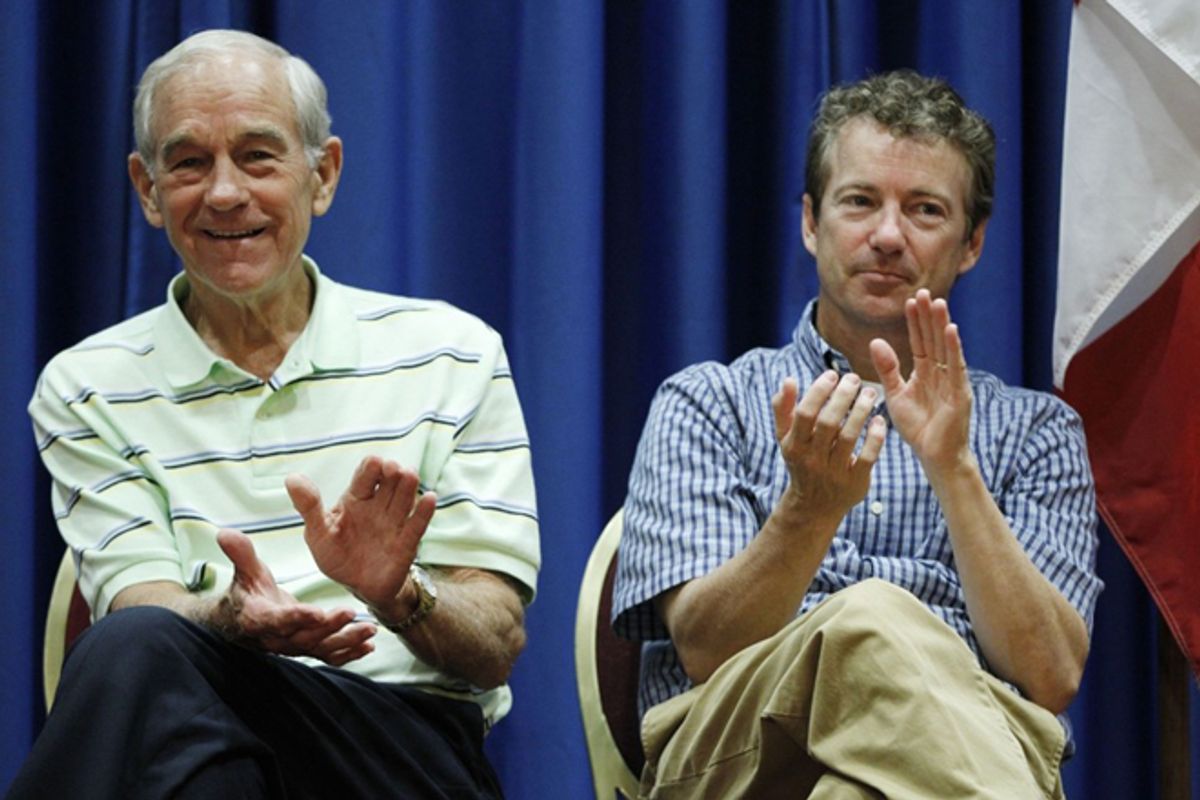 So Ron Paul says he is going to stop actively campaigning, but his supporters will continue to rack up delegates by storming state conventions. What will he do with these delegates? That is still unclear. (Barter them for gold?) What is the point of this strategy, exactly? Also unclear, but the Daily Beast's Ben Jacobs today says it's part of a "sneaky maneuver" to help his son Rand out. Ron will continue to consolidate power but will not appear to be actively sabotaging the party's nominee. Dave Weigel says the maneuver is less sneaky and barely a maneuver: He doesn't want it to be a huge embarrassment when he loses Kentucky, the state his son represents in the Senate.

Interestingly, though perhaps not surprisingly, Paul declined to endorse Libertarian Party nominee Gary Johnson, the former New Mexico governor who endorsed Paul in 2008. Johnson was, formerly, the Republican presidential candidate all those young "liberal" college stoner Ron Paul supporters should have gone with if they'd wanted to support a candidate who believed strongly in liberty but who wasn't a racist Alex Jonesian conspiracy-mongering goldbug loon. But Johnson had "extensive executive experience" instead of a blimp and a sweet logo, so he did not win over many Paul fanatics.

Ron Paul's strategy seems to be a gradual takeover of the Republican Party itself, instead of attempting to build a Libertarian alternative to the GOP. I think he'll find that he can get the party to happily sign on, at least rhetorically, to his fiscal message, as they continue to ignore his popular and populist isolationism and his eminently agreeable but politically untenable positions on criminal justice and civil liberties, forever. The party, in other words, will continue to co-opt whatever they find electorally useful about the Paul phenomenon, as the Tea Party movement stole his iconography and messaging wholesale while attaching it to the same religious-right/nativist sentiment that has driven the party's activist base for decades.

But Paul thinks the future lies with his son Rand, who shares many of his father's enthusiasms and beliefs while also appearing to be more acceptable to the mainstream. Various Paul allies and a few other Republicans strongly suggest that Rand is gearing up for a 2016 run; which would mean, of course, that they expect Romney to lose, but that they need to not appear to be rooting for Romney to lose.

The problem is that what makes Rand Paul more acceptable to the mainstream of the Republican Party is what makes him more repellent than his father. Take, for example, Rand Paul's funny joke this last weekend about Barack Obama and gay marriage.

The president recently weighed in on marriage. And, you know, he said his views were evolving on marriage. Call me cynical but I wasn’t sure that his views on marriage could get any gayer. Now it did kind of bother me, though, that he used the justification for it in a biblical reference. He said the biblical Golden Rule caused him to be for gay marriage ...

Haha Barack Obama is so gay, he should read a Bible for once. Libertarianism!

Nick Gillespie, of the libertarian Reason Magazine, does not get this joke. The crowd, at the Iowa Faith and Freedom Coalition, did seem to get it, or at least they appreciated it. But Rand sounds very different when he speaks to Iowa conservatives than he does when interviewed by Gillespie and Matt Welch. (His address received a nice notice from Robert Costa of the National Review, who did not mention his funny joke.)

While Rand Paul may be, as Gillespie says, the most libertarian senator, he is also not an actual libertarian, as demonstrated by his support for anti-constitutional anti-immigrant legislation and his very vocal antiabortion position. He is also a dumb lout, and I tend to think that having the Senate's most libertarian member be a dumb lout is not actually that good for the Libertarian movement. When he makes explicitly libertarian arguments, he makes them dumbly. When he goes all anti-gay talk-radio bigot culture warrior, which he does increasingly frequently, he does so dumbly. (If he wants to be a mainstream politician and presidential contender, it was certainly dumb to appear -- more than once -- on the radio program of Truther/Birther/New World Orderer/every-other-conspiracy promoter Alex Jones, but for some reason he almost entirely escaped mainstream press scrutiny for these appearances.) While I don't feel much affection for Ron Paul, he seems both significantly smarter and leagues more principled than his son the senator.

If the "electable" face of libertarianism is a fratty anti-gay, anti-choice nitwit like Rand Paul, I will stick with socialism, thank you. And I wonder if the Paul family's plan is to promote "liberty" or to promote the Paul family.