About that "death march"... 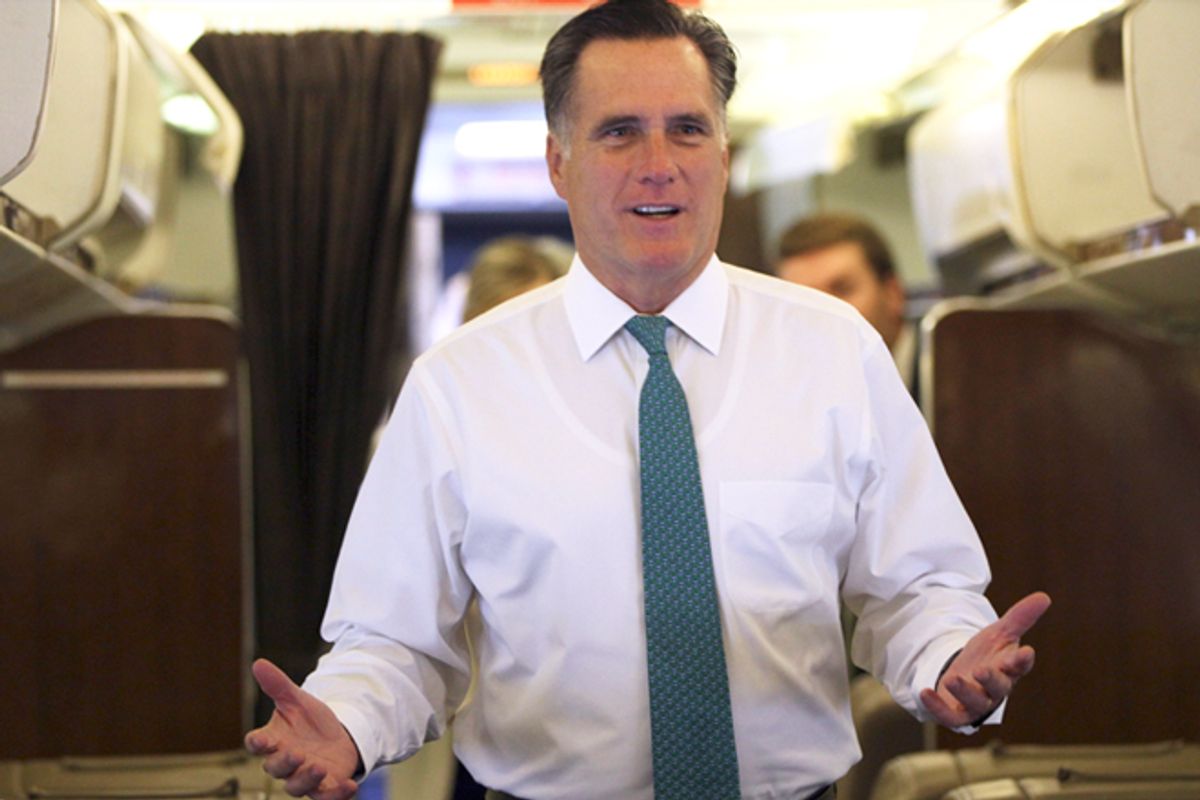 Remember earlier this spring, when Mitt Romney was emerging from the Republican primary “death march” with some of the worst personal popularity ratings for any presumptive nominee of the modern era?

Well, things have changed a bit since then. A new Gallup poll shows Romney’s favorable score recovering from its nadir and pulling roughly even with President Obama. Romney, according to Gallup, is now seen positively by 50 percent of voters, with 41 percent viewing him unfavorably. Obama’s favorable number is 52. Just a few months ago, Romney’s scores were stuck in the mid-30s. The one silver lining for Romney back then was that Bill Clinton had been in a similar spot when he emerged from the 1992 Democratic primaries only to bounce back and win easily in the fall.

If anything, the pace of Romney’s recovery is ahead of Clinton’s. It wasn’t until early July 1992 – three months after he won the New York primary and became the presumptive Democratic nominee – that Clinton’s favorable rating climbed ahead of his unfavorable score. There was a reason for this: The spring months of ’92 were dominated by the Ross Perot phenomenon, which relegated Clinton to afterthought status in media coverage. For months, the slick, scandalized image that Clinton had been saddled with during the primaries endured, but as Perot wilted under the campaign spotlight in June and early July, Clinton finally got a fresh look from the public.

With no third-party distraction, Romney has benefited from that fresh look much earlier. Gallup shows that a big chunk of his improved standing comes from shoring up his own party’s base, with a jump of 22 points in his favorable score among Republicans. Romney’s popularity is also up 11 points among independents, giving him a right-side-up 48-43 percent favorable score with them. Other recent polls have found similar results; Fox’s new survey, for instance, has Romney moving from a net-unfavorable margin of 10 points in March to a net favorable margin of 2 points now.

What this means is that Romney is close to becoming what he’s always aspired to be in this race: The generic opposition party candidate, with popularity neither significantly higher nor lower than it should be.

Mind you, this doesn’t mean that all the pieces are in place and Romney is now on course to win in November. For one thing, the Obama campaign will do everything in its power – and spend tens of millions of dollars -- to drive down Romney’s popularity. It’s hard to imagine it dropping back to where it was in March, but a decline of even a few points from where it is now could be a serious problem for Romney. He could also stand to improve his score a few points; right now, it qualifies as adequate, but hardly great.

Ultimately, though, the generic candidate strategy depends on a majority of voters deciding that they want to throw the incumbent out. Romney’s goal is to offend as few voters as possible and to be positioned as an acceptable vehicle for these voters to act on their instincts. On this front, he’s nowhere near as well-positioned as Clinton was in ’92. Clinton was running against an incumbent, George H.W. Bush, whose job approval rating hovered in the high-30s and low-40s. Obama, by contrast, clocks in somewhere in the high-40s.

That’s a significant difference. We all remember Clinton as a master campaigner, but it was Bush’s profound unpopularity more than Clinton’s effortless charm that drove the ’92 result. A generic Democrat, in other words, would have won that race. Obama’s approval rating is low enough now that a generic Republican could win this year’s race, but it’s a much iffier proposition.