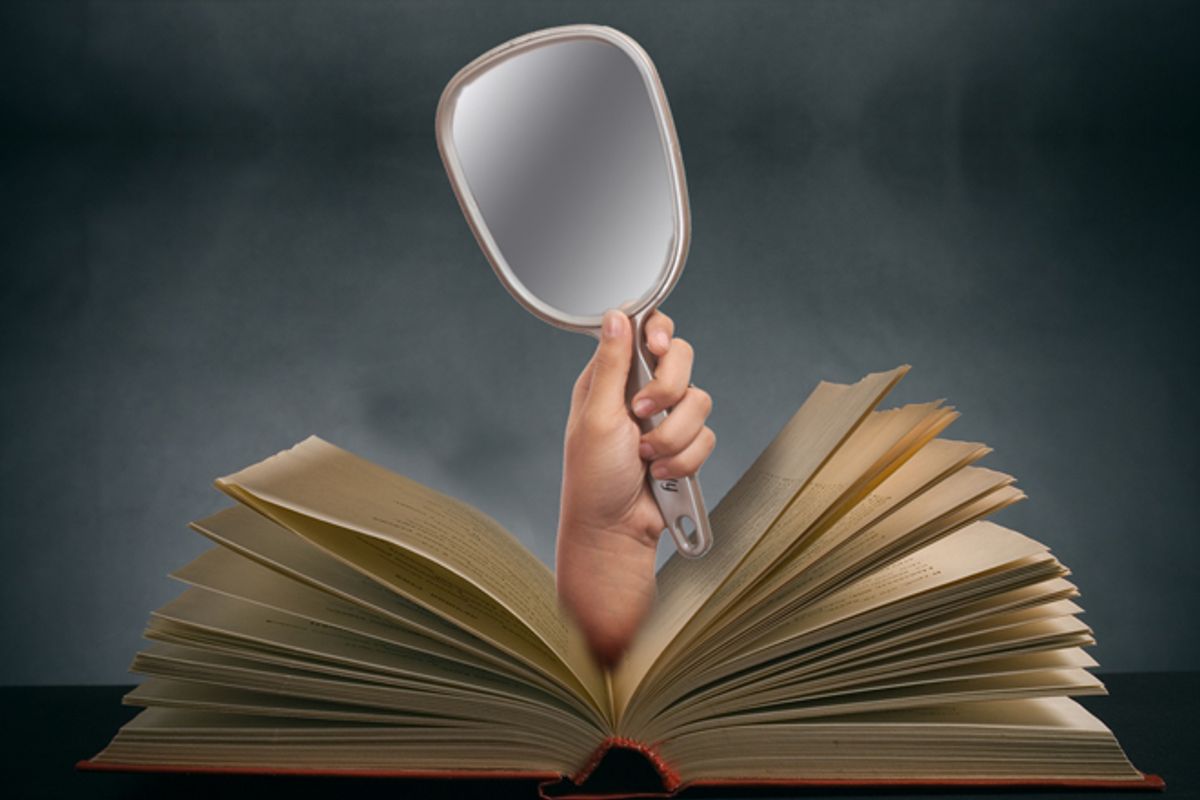 The news of recent research documenting how readers identify with the main characters in stories has mostly been taken as confirmation of the value of literary role models. Lisa Libby, an assistant professor at Ohio State University and co-author of a study published in the Journal of Personality and Social Psychology, explained that subjects who read a short story in which the protagonist overcomes obstacles in order to vote were more likely to vote themselves several days later.

The suggestibility of readers isn't news. Johann Wolfgang von Goethe's novel of a sensitive young man destroyed by unrequited love, "The Sorrows of Young Werther," inspired a rash of suicides by would-be Werthers in the late 1700s. Jack Kerouac has launched a thousand road trips. Still, this is part of science's job: Running empirical tests on common knowledge -- if for no other reason than because common knowledge (and common sense) is often wrong.

A far more unsettling finding is buried in this otherwise up-with-reading news item. The Ohio State researchers gave 70 heterosexual male readers stories about a college student much like themselves. In one version, the character was straight. In another, the character is described as gay early in the story. In a third version the character is gay, but this isn't revealed until near the end. In each case, the readers' "experience-taking" -- the name these researchers have given to the act of immersing oneself in the perspective, thoughts and emotions of a story's protagonist -- was measured.

The straight readers were far more likely to take on the experience of the main character if they weren't told until late in the story that he was different from themselves. This, too, is not so surprising. Human beings are notorious for extending more of their sympathy to people they perceive as being of their own kind. But the researchers also found that readers of the "gay-late" story showed "significantly more favorable attitudes toward homosexuals" than the other two groups of readers, and that they were less likely to attribute stereotypically gay traits, such as effeminacy, to the main character. The "gay-late" story actually reduced their biases (conscious or not) against gays, and made them more empathetic. Similar results were found when white readers were given stories about black characters to read.

What can we do with this information? If we subscribe to the idea that literature ought to improve people's characters -- and that's the sentiment that seems to be lurking behind the study itself -- then perhaps authors and publishers should be encouraged to conceal a main character's race or sexual orientation from readers until they become invested in him or her. Who knows how much J.K. Rowling's revelation that Albus Dumbledore is gay, announced after the publication of the final Harry Potter book, has helped to combat homophobia? (Although I confess that I find it hard to believe there were that many homophobic Potter fans in the first place.)

Absurd as this tactic may sound, many publishers are already kind of doing it -- and catching hell. Although the term "whitewashing" is most often used to describe film and TV adaptations in which white actors are cast as characters who were people of color in the original book, something similar also happens with book graphics. Novels about black or Asian characters have been given cover art that features white people.

Controversies over cover-art whitewashing, and other attempts by agents, editors and publishers to downplay or even eliminate minority characters, have roiled the world of young adult literature in recent years. The author Justine Larbalestier (who is white) wrote a YA novel, "Liar," with a black heroine in 2009, but her publisher insisted on using a photograph of a white teenager for the cover. Larbalestier took their disagreement public and the ensuing scandal persuaded the publisher to back down. Ursula K. Le Guin, a revered science-fiction and fantasy author who has often chosen dark-skinned people as her protagonists, has had to put up with seeing them depicted as white in cover art and film adaptations for decades.

Publishers argue that they're only trying to make sure their authors' books find the widest possible audience. What they mean is that a certain percentage of white (or straight) readers will summarily conclude a book isn't for them if the face on the cover fails to resemble their own. Sad to say, the publishers are probably right about that. While the readers in the Ohio State study didn't get to choose the stories they read, many of them were deciding how much to invest in the protagonist and his experiences -- how much to identify -- on the basis of his sexual orientation or race.

Authors, fans and observers are rightly disgusted by the practice of cover-art whitewashing. It shouldn't have to be that way. But some commentators on the controversy seem to think that if publishers act as if race or gender or sexual orientation isn't a factor in what many people decide to read, somehow it will simply stop being a factor. This seems unlikely. If it were so easy to rid people of their prejudices, the world would already be a much pleasanter place. It takes regular exposure to different types of people in the course of everyday life -- at school and in the military, the workplace and the neighborhood -- plus a whole lot of time and peer pressure to wear bias down.

Well, it takes that -- and maybe the magic of storytelling? The readers in the Ohio State study did become more understanding of gay and black people after they were (let's not put too fine a point on it) tricked into identifying with them. This type of sleight-of-hand is something only a non-visual medium like prose fiction can pull off. It can firmly lodge readers inside an imaginary person's head without ever showing them his or her face. In Neil Gaiman's "Anansi Boys," for example, the narrator never explains that all the principle characters are black, and each reader will come to that realization at a different stage in the narrative. It's Gaiman's way of tweaking the very common readerly assumption that defaults all major characters to white unless their race is otherwise specified. (And sometimes not even then, as quite a few young fans of "The Hunger Games" demonstrated by being astonished when a supporting character, clearly described as black in the novel, was played by a black actress in the film.)

Of course, not all readers are white or straight, and the ones who aren't deeply appreciate novels that advertise the diversity of their characters. It's about time they got heroes and heroines who looked like them, and novels that speak to their distinctive experiences. They have been identifying with characters across the boundaries of race, gender and sexual orientation from time immemorial, and are masters of the art, but understandably they'd like to give their ninja skills a rest. Furthermore, there are also white readers who prefer variety in their fiction or are deliberately trying to correct the imbalances of the past.

Nevertheless, if you believe, as many Americans have since the days of the Puritans, that books ought to morally improve their readers, then maybe there's a place for a little judicious whitewashing in the writing and publication of fiction. It has literally been demonstrated to change hearts and minds, at least for a while. That's more than many consciousness-raising efforts -- including righteous lectures delivered by the enlightened -- can say.

The Booksmugglers blog on notable recent instances of book-cover whitewashing in YA.

Ursula K. Le Guin writes for Slate about the changes made to the race of major characters in the TV adaptation of her "Earthsea Trilogy."

Hunger Games Tweets, a Tumblr compiling and discussing the response of some fans to the casting of a black actress as a supporting character in the film version of Suzanne Collins' novel.