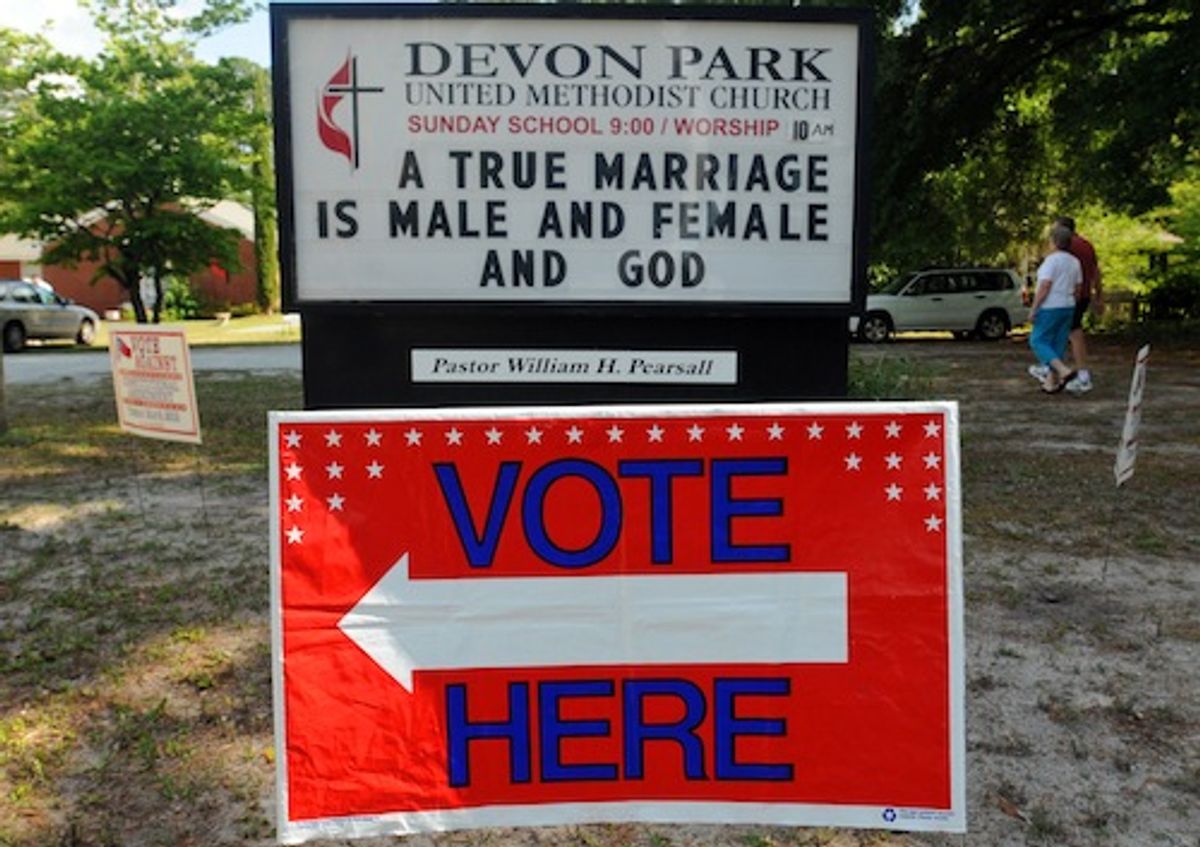 Christian Right activists who give money, pressure politicians and organize against gay rights may think they’re accomplishing a couple of goals, like rolling back gay rights and asserting their religion’s primacy in American culture. Unfortunately for them (but fortunately for the rest of us), one of the things they're doing in the long run is alienating their young people -- not a good long-term strategy. Short-term victories like passing more bans on gay marriage, sometimes repeatedly in single states, might feel good for homophobic Christians, but in the long run, it’s their religion that will pay the ultimate price; available evidence shows that anti-gay activism is souring young people on Christianity.

In response to the latest gay-bashing vote in North Carolina, evangelical writer and speaker Rachel Held Evans wrote an impassioned plea to her fellow Christians to just cut it out. She points to statistics showing how much damage the church has sustained because of its anti-gay crusade. Research conducted by the pro-Christian Barna Group in 2007 on Americans age 16-29 found that “anti-homosexual” was the dominant perception of modern Christians. Ninety-one percent of non-Christians and 80 percent of Christians in this group used this word to describe Christians.

She also points to research documented in the book You Lost Me by David Kinnaman showing that 59 percent of teenagers who grow up as church-going Christians abandon their faith in adulthood. One of the major reasons is the gay rights issue. Overall, the perception--a largely correct one, I’d add--is that modern conservative Christianity is dominated by sex-phobic bigots who use God as a cudgel to beat all sorts of people, but especially gays and lesbians. No wonder many in the younger generation want out.

Unfortunately for Evans, these kinds of numbers probably won’t do much to convince the Christian right to give up on gay-bashing, at least not until it's done even more serious damage to the Christian brand. Evans may be drawn to Christianity for fellowship and spirituality--many more tolerant Christians are--but the dominant function of conservative Christianity in the real world has never been to offer comfort and solace to believers. Religion is about power and giving up the war on gays would mean relinquishing power and control over their adherents' most private selves. Thus, we can guess that the Christian Right won’t stop fighting gay rights until it’s way too late for them to take it back.

Right-wing American Christianity is rife with contradictions. The content of the church’s actual teachings are centered around the figure of Jesus Christ, who is renowned as the lover of the meek and the powerless. Yet right-wing Christianity in America has often served to comfort the powerful and afflict the weak.

In fact, when you look away from the “meek shall inherit the earth” text to the actual uses of Christianity throughout history, a different picture emerges. God has been used to rationalize the power of kings over the people, men over women, rich over poor, Westerners over the rest of the world, and has even been used to justify slavery. In the latter half of the 20th century a particular brand of American Christianity called the Prosperity Gospel began to celebrate obscene wealth, taking Christianity far away from its progressive elements. And of course, conservative Christianity in America has spent much of the last century and the start of this one demonizing and oppressing LGBT people.

As devoted as it is to its anti-gay agenda, the Christian Right will be paying the penalty as gays are increasingly accepted in mainstream culture. Most political watchers are downright astounded at how quickly gay rights activists have turned public opinion around to favor their point of view. Less than two decades ago, most of the country had never even heard of the concept of same-sex marriage. Since then, there’s been a steady rise in support for legalizing same-sex marriage, with the most recent polls showing a majority of Americans supporting legalization.

Conservative Christian activists know that the perception of homophobia is damaging, which is why they try to avoid speaking of the issue directly at all, instead saying that they support “traditional marriage.” But the attempts to seem less hateful toward gays while attacking their rights fail repeatedly because homophobes can’t stay on message.

Virginia legislators this week blocked the nomination of highly regarded prosecutor Tracy Thorne-Begland to be a district judge for no other reason than they disapproved of his homosexuality. Del. Bob Marshall went on the record tut-tutting Thorne-Begland for “his behavior,” even though Thorne-Begland lives a quiet life with his partner and their adopted children. The whole situation exposed the emptiness of the “traditional marriage” rhetoric, demonstrating once again that the Christian Right’s views regarding gay people are rooted in a very un-Christ-like hate.

With all this hatefulness on display, no wonder conservative Christianity is losing young people. While just a little over half of Americans supporting gay marriage, nearly two-thirds of adults born after 1981 do. The Christian Right is increasingly out of step with how Americans feel about gay rights. This issue, even more than abortion rights, might be the one that destroys them in the end.