Yes, please. It would be very funny to see him lose 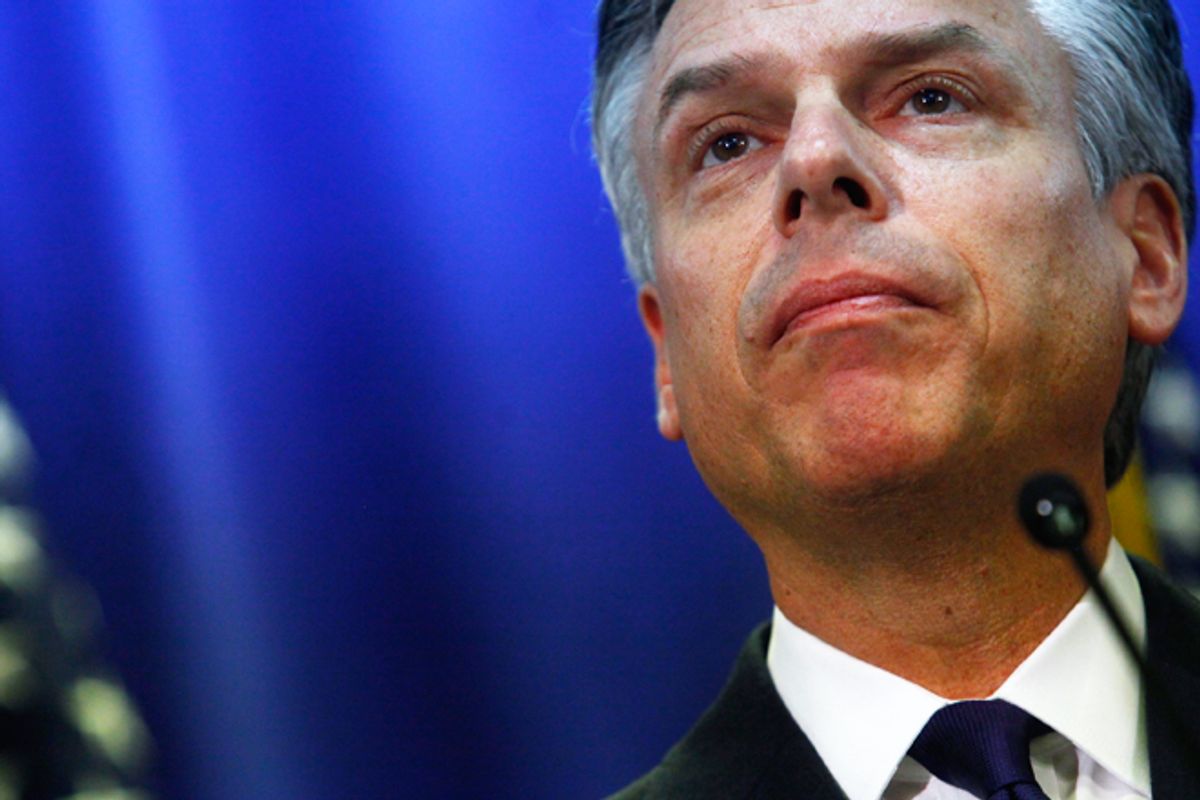 Yes, Jon Huntsman should definitely run for mayor of New York, because I never tire of watching Jon Huntsman get rejected by voters. The best part of a Jon Huntsman campaign is when his well-heeled supporters very sincerely and tragically argue that the fact that no one wants to vote for Jon Huntsman is a sign that the Republic itself is in peril. They would get so sad and melodramatic when he got 10 percent of the vote.

Now, there is no evidence that Jon Huntsman is planning for run for mayor of New York City, but one of his annoying daughters tossed this one out there last night:

Trying to convince dad @JonHuntsman to run for mayor of NYC. Thoughts? #whynot?

Why not? I mean sure he has never lived in New York and has no connection to the city, but why not?

Of course, now that this idea is floating around, very rich and well-connected morons just might set about trying very hard to make it a reality. Jon Huntsman is a creature of the sort of oblivious center-right rich folk who bankrolled the hilarious failed New York campaigns of Harold Ford Jr. and Reshma Saujani. They would like very much to see another one of their class be the mayor of their city, after Bloomberg ends his term (if he ends his term). The Republicans have essentially no candidate. (I still wouldn't put it past Police Commissioner and professional harasser-of-minorities Ray Kelly to mount a run, but at the moment he's sounding disinclined to.) And Jon Huntsman is the sort of nationally prominent "independent" candidate all three major New York newspapers would love (the Daily News would love him the most, obviously, but the Post would love him because he is secretly not actually that moderate).

Jon Huntsman -- whose tax plan called for the complete elimination of taxes on capital gains and dividends, as well as the elimination of the Earned Income Tax Credit, the Reagan-era tax benefit for poor people that used to be the sole form of welfare that conservatives supported, and who also wholeheartedly supported the Paul Ryan plan to fix the deficit by eliminating Medicare and not making rich people pay taxes -- was of course beloved by the press and labeled a reasonable moderate when he ran for the 2012 Republican presidential nomination. He was mistaken for a political moderate primarily because he does not believe that God created cavemen and dinosaurs at the same time, roughly 4,000 years ago. Huntsman, who supports the complete repeal of Dodd-Frank and is strictly antiabortion and anti-gay marriage and anti-healthcare reform and pro-gun, is now essentially a symbol of the dignity and sagacity of the "radical center," even though he is a conservative Republican.

So obviously New Yorkers would be thrilled to vote for this guy. I endorse this.