If you only knew the singing sensation by her 1970s smashes, you barely knew her at all 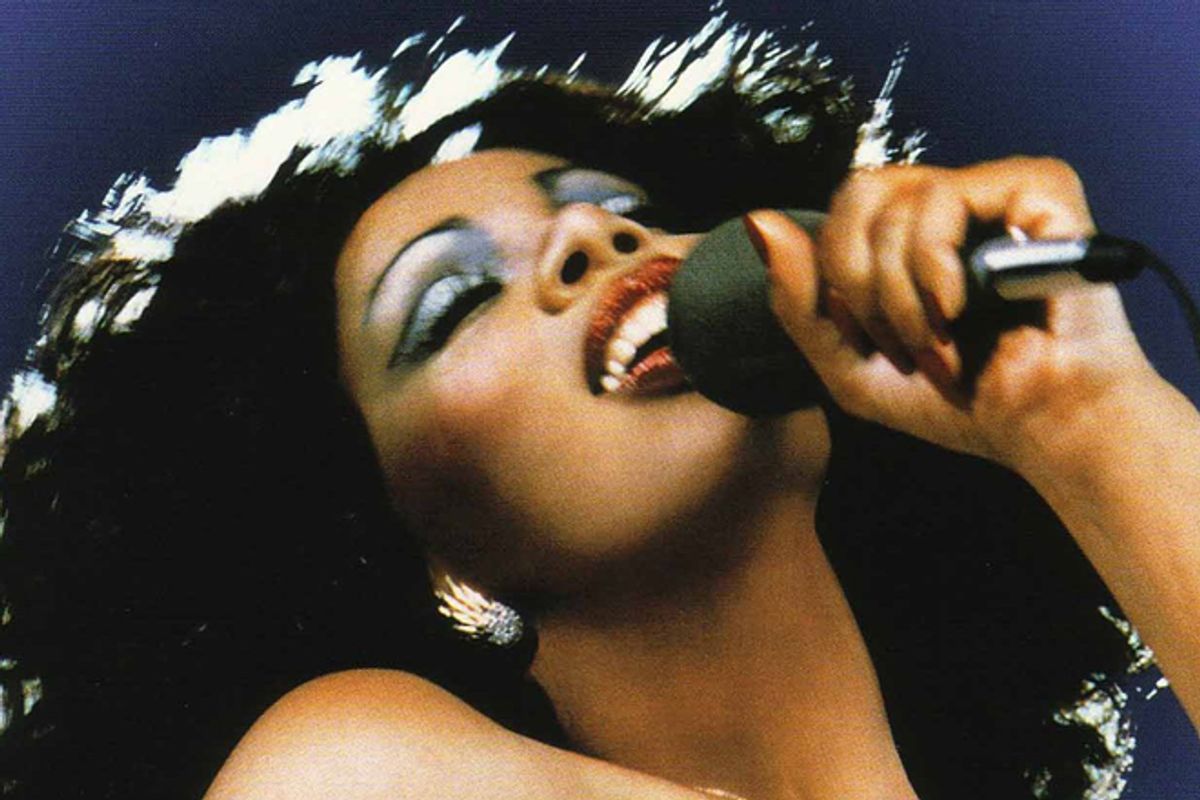 There is so much about Donna Summer that we didn’t know… and not just the cancer that took her life. Let’s start with her relationship to rock. Summer is quite understandably known as a disco singer, and quite rightly so. It was disco that made her, and she, as perhaps disco’s highest profile performer, who helped to shape the genre. But like a number of other disco artists -- Nile Rodgers and Bernard Edwards of Chic, the vocal trio Labelle and Chaka Khan all come to mind -- Donna Summer was also a rocker. Yes, she grew up singing gospel, but she began her professional career as a '60s rocker. She would describe this as her Janis Joplin phase, and she did indeed sing in a group that performed at the Psychedelic Supermarket -- Boston’s version of Bill Graham’s Fillmore. She then went on to play a hippie in the Munich production of the rock musical "Hair," and sported an enormous Afro inspired in large part by her hero, the black radical activist, Angela Davis. Although the disco music that she made with producers Giorgio Moroder and Pete Bellotte, and engineer Harold Faltermeyer provoked a fierce backlash from some aficionados of rock, this was a foursome that, as critic Dave Mash pointed out, functioned as a rock band, one in which Summer played a pivotal role as singer and songwriter. And then there is her singing. Listen to her hit “Hot Stuff,” and tell me that Summer could not sing rock.

Summer, who was strikingly beautiful, made some very steamy -- some would say X-rated -- music, most memorably with her first hit, 1975’s "Love to Love You Baby." With Summer’s groans, moans and gasps powering the track, it broke new ground in its sexual explicitness. Promoted by her record company in explicitly sexual terms, and giving performances that made Tina Turner’s look tame, Summer soon found herself tagged the “Linda Lovelace of pop music.” She had seen this coming. In fact, she had not wanted to be the singer on that track, and agreed only to record the demo, and only then in a blackened studio where she sang, imagining that she was Marilyn Monroe giving herself over to orgasmic ecstasy. After producer Moroder convinced her to let him use her vocal, her record label president, seeing its bedroom potential, demanded a long-playing version that left the media debating whether the singer came 22 or 23 times. Rock critic Robert Christgau poked fun at the record with a review that consisted of three questions, “Did you come yet? Huh? Did you come yet?” Other reviews were more disparaging. But “Love to Love You Baby,” like much of her music, put female desire front and center in a way that it wasn’t in most rock music. Indeed, Summer’s music is inseparable from second-wave feminism’s emphasis on women’s sexual empowerment.

There is so much to say about Summer, who could have been a full-fledged personality had she not been pigeon-holed and dismissed as a disco tart. I was once on a radio program with her and, believe me, she was nobody’s fool. She described the “star-making machinery” as well as anyone. After she had already became famous she told Rolling Stone that her career sometimes felt like “this monstrous, monstrous force, this whole production of people and props that you’re responsible for, by audiences and everything that rules you until you take it upon yourself to be a machine… And at some point a machine breaks down.” Fame, she observed, diminished her, making her feel like nothing so much as a “commodity.” After falling into a debilitating depression and attempting suicide, she took control of her life again through Christianity.

In a way, I think one hears Summer confront her own commodification on her marvelous record “Bad Girls.” Although the music in the final, released version suggests otherwise, Summer isn’t celebrating prostitution on “Bad Girls.” Rather, she is confronting what she shares with those streetwalkers. “Now, you and me are just the same,” she sings.  And if Summer sounds unusually exuberant as she yells out to a john, “Hey, mista, have you got a dime?” perhaps it’s because Summer understood what it meant to be made into a commodity and reduced to a seductive whisper. Tellingly, in a television interview some years later, Summer noted that “Bad Girls” marked the moment when she stopped being an object and became a subject. Let’s hope that in her death she inspires more writing that fully acknowledges the intelligent subjecthood of this disco diva and kick-ass rock and roller.

Alice Echols, a professor of English, and the Barbra Streisand Chair of Contemporary Gender Studies at the University of Southern California, is the author of four books, including "“Hot Stuff: Disco and the Remaking of American Culture."