Rep. Eleanor Norton tells Salon how Republicans wouldn't let her talk at a hearing to ban abortions in her district 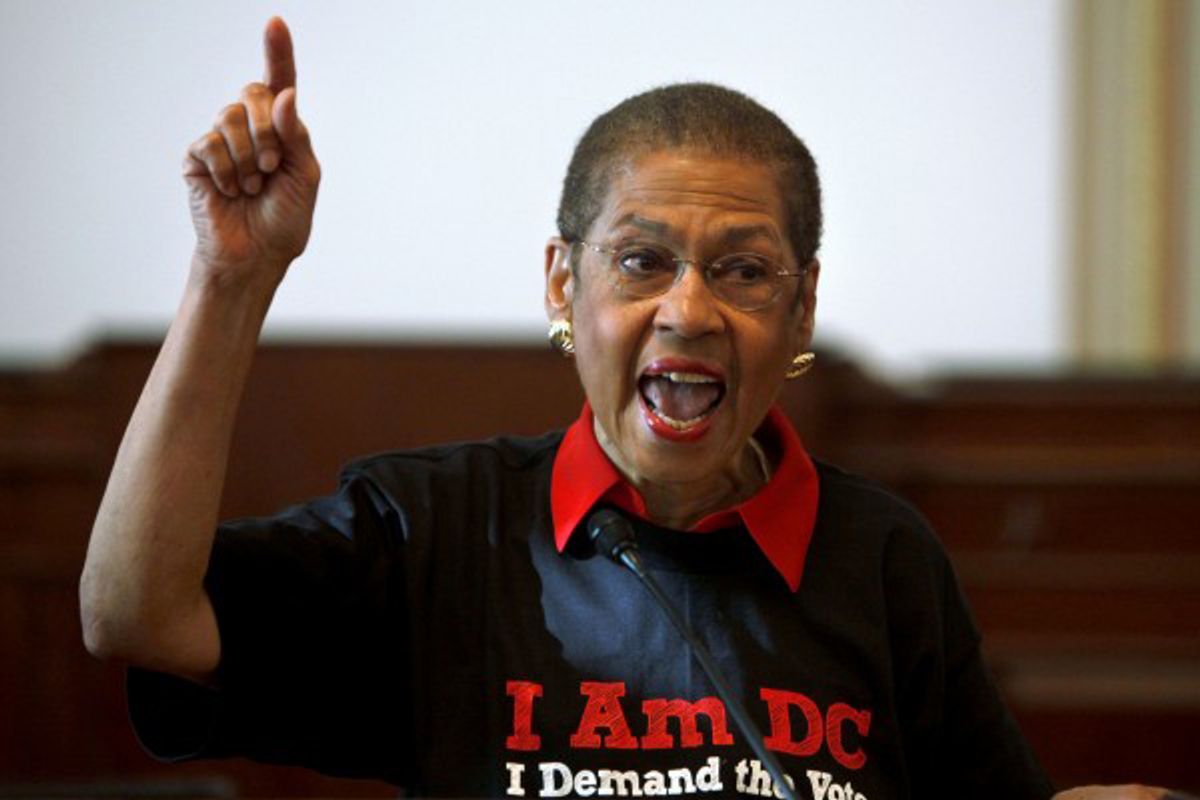 House Republicans seem to have learned this much in the past few months: It looks bad to turn away a woman from a hearing on women’s health. So when D.C. congresswoman Eleanor Holmes Norton was denied the courtesy of testifying at a subcommittee hearing yesterday in her district on banning abortions after 20 weeks, Chairman Trent Franks, R-Ariz., suggested a compromise of sorts.

“He said that the congresswoman could, if she desired, sit on the dais of the hearing, but she would not be allowed to speak,” Norton told Salon after the hearing. She declined an offer she said “no self-respecting member” would accept.

“I certainly didn’t give them that optic,” she said drily.

Franks was technically within his rights – per the rules, the Democratic minority was granted one witness, D.C. resident Christy Zinks, who had an abortion at almost 22 weeks after the detection of a severe fetal abnormality. Still, as Norton pointed out, “there is a long tradition that goes back more than a century of allowing members to testify on a bill that may touch upon the district.” Nancy Pelosi also condemned the move.

Seven states have followed Nebraska in passing manifestly unconstitutional bans on later abortions without health exceptions, on the scientifically suspect notion that a fetus can feel pain after 20 weeks. So far, pro-choice organizations have declined to mount a legal challenge, for complicated reasons.

Norton called it a “stalking horse” for the overturning of Roe. “We understand we’re the vehicle, we know we’re not the object of affection,” she said. “What they want from the Congress is a federal imprimatur to continue their march in the states, to say, even the Congress has voted for a bill to limit abortion to 20 weeks.”

The National Right to Life Committee has called the bill its “top congressional priority for 2012,” and will score members based on their votes, even though it likely has no chance of getting past the Senate – or the president. “They are serious about this bill,” Norton told Salon. “They’re not playing.”

That said, she thinks that despite Franks’ zeal, other House Republicans have lost their zeal for fighting what’s still being called the war on women. An earlier Franks bill, seeking to limit race- and sex-selective abortions, didn’t make it to the floor. And on the House version of the Violence Against Women Act, fiercely opposed by the White House and women’s groups, “They keep saying that they’re working on a way to reach an accommodation, and for them, that is unusual to say,” Norton said.

“They didn’t anticipate the way the war on women, as it is called, has boiled up to the surface,” Norton said. “And they’re trying to quell it somewhat.”