Who gets to be an FBI threat? 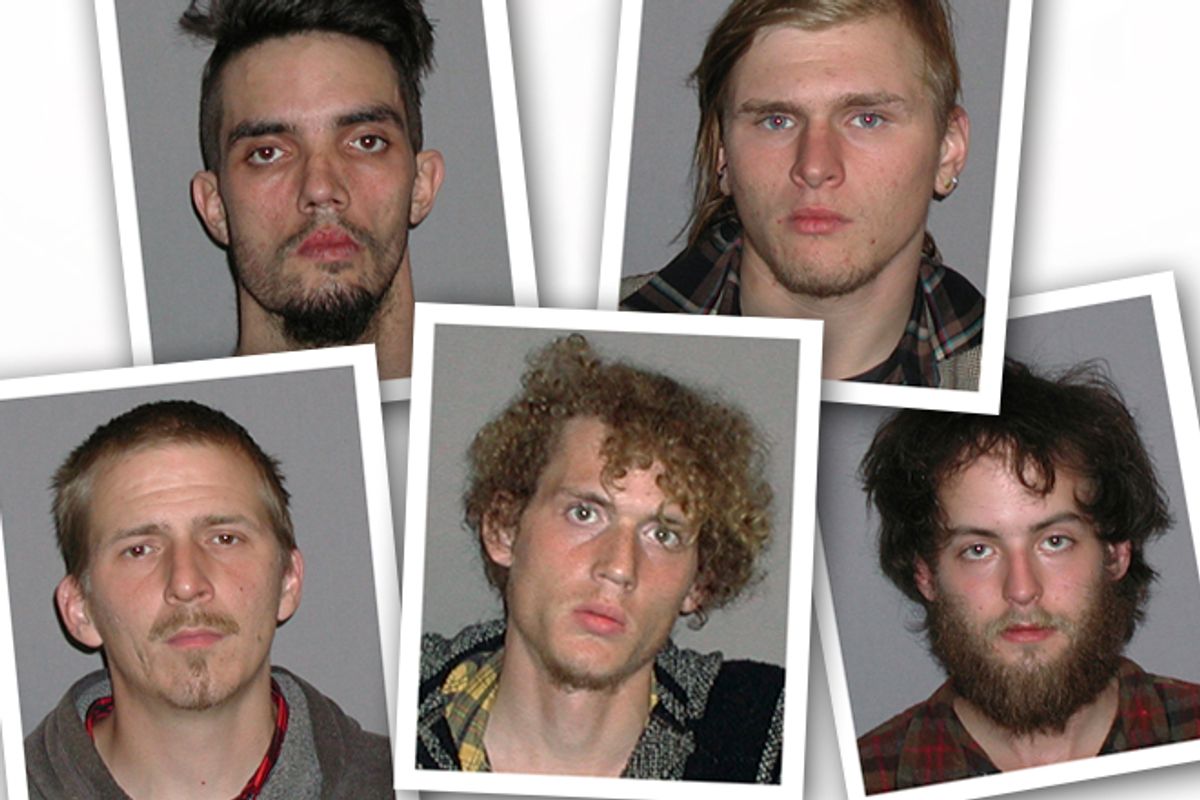 The five men arrested on April 30 for plotting to blow up a bridge near Cleveland, Ohio. (AP/FBI)
--

Writing in Rolling Stone this week, Rick Perlstein looks at how the FBI regularly entraps and creates "terrorists" out of anarchists and activists, while comparatively ignoring violent white supremacist groups.

Using some recent examples, Perlstein paints a startling picture. He notes the arrest this month of a small group of self-identified anarchists, participating in Occupy Cleveland, who -- strung along in an FBI sting -- planned to blow up a large Ohio bridge. The target was suggested and (fake) C-4 explosives were provided by an FBI infiltrator. As Perlstein put it, the episode was one among numerous law enforcement schemes since 2001 in which "the alleged terrorist masterminds end up seeming, when the full story comes out, unable to terrorize their way out of a paper bag without law enforcement tutelage."

Perlstein contrasts the Ohio arrestees with another recently arrested group: The American Front, a "known terrorist group" of Florida-based white supremacists who -- without FBI encouragement -- "took a break from training with machine guns for a race war in order to fashion weapons out of fake 'Occupy' signs which they planned to use to assault May Day protesters in Melbourne, Florida." While anarchists, animal rights activists and Muslims pass muster as federal targets, organized hate groups do not.

The distinction between entrapment (which is illegal) and a sting (which is legal) now appears to be a much eroded line in the sand. As Perlstein's piece points out, it is up to a jury once arrests have been made whether law enforcement set up a trap or a sting. In previous decades, defendants have been acquitted in cases of entrapment; but not in recent years:

Not a single "terrorism" indictment has been thrown out for entrapment since 9/11 – not the Liberty City goofballs supposedly planning to blow up the Sears Tower who had no weapons and refused them when offered; not the Newburgh, New York outfit whose numbers included a schizophrenic who saved his own urine in bottles. (Even the judge who sentenced them said "the government made them terrorists.")

One of the most famous recent cases of FBI infiltration -- which is not mentioned in the Rolling Stone article -- hangs over anarchist networks worldwide. Brandon Darby, the once trusted activist and organizer-turned-FBI-informant and now writer for Andrew Breitbart's Big Government, is the dirtiest name to utter in anarchist circles. Darby infiltrated groups organizing protests around the 2008 Republican National Convention in St. Paul, Minn. Darby fed the FBI information, which helped them seize riot shields made by a group from Texas. Enraged by the seizure (but still viewing Darby as a comrade) two young men from Austin, David McKay and Bradley Crowder, bought the materials for and constructed Molotov cocktails with the thought of using them against state vehicles. The two, however, decided overnight that this was a bad idea -- and left the devices at home, with no intention of using them.

Darby passed information about the Molotov cocktail plans on to the FBI, and McKay and Crowder were arrested and charged with domestic terrorism. While Crowder accepted a plea deal without trial for a two-year prison sentence for making the devices, McKay went to trial, arguing Darby entrapped him. The trial ended with a hung jury. Before the retrial, however, McKay retracted claims of entrapment and agreed to accept a plea deal (and serve a four-year prison sentence, for making the Molotovs and perjury).

Perlstein notes that “the State is singling out ideological enemies” – and if federal sting targets are much to go by, the State’s position is clear: anti-capitalists, environmentalists and Muslims are threats; racists are not. We can respond by decrying FBI activity, and by arguing that their targets are not real threats. Or, we can take patterns of FBI activity more seriously and ask why anti-capitalists are more threatening than white supremacists. This line of questioning can likely be reduced to two questions, chanted again and again up and down the country when protest front lines are faced with lines of police: “Who do you protect? Who do you serve?”