Environmentalists are focused oil and gas, but a bigger carbon disaster may be brewing in the Pacific Northwest 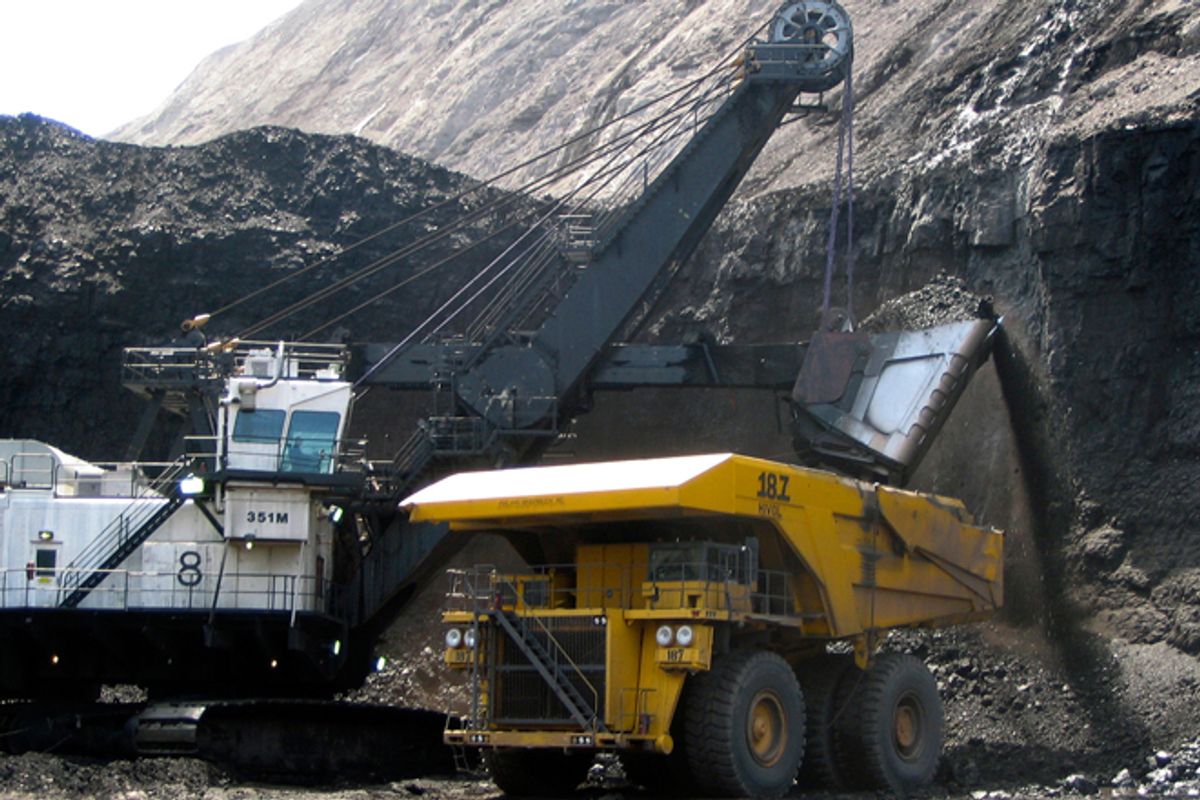 Coal is without question our dirtiest fuel source: When burned, it dumps toxins like mercury and nitrogen oxides into the air and packs an outsize punch when it comes to carbon emissions. Since America has a lot of it, though, we've tended to use a lot: Historically, around half our electricity has been generated by coal combustion plants. But as a result of sustained anti-coal activism, low prices for natural gas, and new EPA regulations on power plant emissions, Americans are using a lot less coal than we used to, and the future of the sooty stuff in this country is looking dim. So the U.S. coal industry is pinning its hopes on China. While historically most of our exported coal has gone to Europe, U.S. exports to China increased 176 percent between 2009 and 2010, and that number is likely to keep rising as the Asian market for coal continues to expand. The prospect of shipping coal across the Pacific is even more appealing considering that Western states like Wyoming and Montana have vast coal reserves in the Powder River Basin, one of the largest coal deposits in the world.

But while the incentives to drastically scale up Western-mined, Asia-bound coal exports exist, the infrastructure to do so does not — at least, not yet. Coal mining companies are hoping to change that by building up to six coal export terminals in the Pacific Northwest — three apiece in Washington and Oregon — with the combined capacity to ship around 150 million short tons of coal to Asia each year. These new plans would more than double 107 million short tons of coal the U.S. exported in 2011.

But good news for the coal industry is bad news for the climate, and whether Powder Basin coal is burned here or abroad, it’ll add the same amount of greenhouse gas emissions to an already-warming atmosphere. In 2007, Powder Basin coal alone was responsible for an estimated 877 tons of carbon, around 13 percent of the U.S. total; Eric de Place at the Sightline Institute crunched the numbers and found that the coal shipped by just two of the proposed terminals would be responsible for more annual emissions than the tar sands oil carried by the Keystone pipeline. As Bryan Walsh points out, many industrialized countries have cut their own carbon footprint by exporting carbon-intensive fuels to be burned elsewhere, essentially employing an accounting trick rather than actually reducing global emissions. But climate activists aren’t going to let us get away with it if they can help it: Having largely succeeded in stopping Americans from burning coal, activists are trying to make sure no one else burns it either. And, as with Keystone, they're seeking to accomplish their climate goals by blocking fossil fuel infrastructure from being built.

Climate change is notoriously difficult to organize around, but climate activists have won one small victory after another by allying with local communities who are worried about the more immediate and tangible impacts of fossil fuels on health and quality of life. Shipping coal overseas instead of using it at home may cut down on pollution from coal-fired power plants, but the health impacts of coal could simply be shifted to the communities along the transportation route and near the proposed port sites: accordingly people in Montana, Washington and Oregon have raised concerns about coal dust, diesel pollution, increased railway traffic and use of waterfront space.

In Washington, new ports have to pass a review under the State Environmental Policy Act, and in late 2010, the state temporarily blocked one proposed coal terminal at the Port of Longview, citing increased greenhouse gas emissions.  Other terminals, like the Gateway Pacific Terminal, are similarly contentious: Though past campaigns have sought to build connections between Washington’s labor and environmental constituencies, local communities are divided along those familiar lines over whether the project should go forward. In Oregon, the proposed terminals aren’t subject to statewide review, yet Gov. John Kitzhaber has joined protesters in voicing concerns about the environmental and health impacts of increased coal traffic, calling for a "full national debate" on the matter. While the EPA has also weighed in with concerns, the federal government has no formal role in the review process, so whether coal exports actually become the focus of a national conversation will probably depend on how successful activists are at stopping them.

Matt Yglesias thinks they have a decent shot, explaining that "the fact that the vast coal reserves of the American heartland need to pass through the relatively narrow bottleneck of the generally progressive Pacific Northwest gives environmentalists one of their best available opportunities to curb carbon dioxide emissions in the absence of any meaningful progress toward a national or global framework." But if the coal industry starts to get worried, it’s hard to imagine Republicans and coal state Democrats won’t gleefully seize the opportunity to denounce the protesters as tree-hugging job killers. In fact, the Obama administration’s so-called war on coal is already shaping up to be a campaign issue in states like Kentucky and West Virginia, which together employ nearly half the coal mining industry's 83,000 workers. But employment in renewable energy industries is rapidly outstripping coal mining jobs, and coal isn't likely to ever produce another great jobs boom: Even if Western coal mining ramps up, it’s over twice as productive as Appalachian mining, which means more profits but fewer jobs, and the coal export terminals themselves won’t create many jobs either.

Still, it’s common to hear the argument that if China’s going to get its coal somewhere, we might as well be the ones who sell it to them. And sure, Indonesia and Australia will continue to supply China with coal regardless of what the U.S. does. But there’s evidence to suggest that the loss of U.S. coal exports could still make a difference in China’s energy habits. In a recent paper, former University of Montana economics chairman Thomas Powers argues that stopping coal exports could actually result in enough of a price hike to decrease coal use in China, saying that “decisions the Northwest makes now will impact Chinese energy habits for the next half-century.”

Of course, all the usual caveats still apply: The coal being exported still represents a small fraction of global carbon emissions; coal may be replaced with other carbon-intensive fossil fuels; dealing with climate change requires system-wide changes rather than a patchwork of stopgap local measures. While the battle continues in the Northwest, coal may find other routes out of the country: Coal producers have made deals with ports in British Columbia and along the Gulf Coast, where environmental scientists are concerned that the runoff from expanding coal-exporting facilities in Plaquemines Parish could undermine Louisiana’s attempts to restore its rapidly disappearing wetlands. On the other hand, coal investments are riskier than they seem: If Mongolia starts selling more coal to China, or if China itself starts mining and using more coal, the bottom could fall out of the market, leaving Oregon and Washington with worthless coal terminals.

At the same time, the argument for why coal exports matter actually is pretty simple: as Grist’s David Roberts sums up, “to prevent the climate from spiraling forever out of control, we’re going to have to leave most of the remaining fossil fuels in the ground … we desperately need to keep coal in the ground anywhere and everywhere it’s possible.” American activists can’t stop Australia or Indonesia from selling China coal, but if they can manage to stop American coal from leaving the country or being used within its borders, a huge amount of coal — and the carbon it contains — will stay put. So while it’s a big if, it’s a battle many feel they have no choice but to fight.