What's the matter with Nebraska?

Forget Article IV of the Constitution! Isn't it about time we stop pretending that all states are created equal? 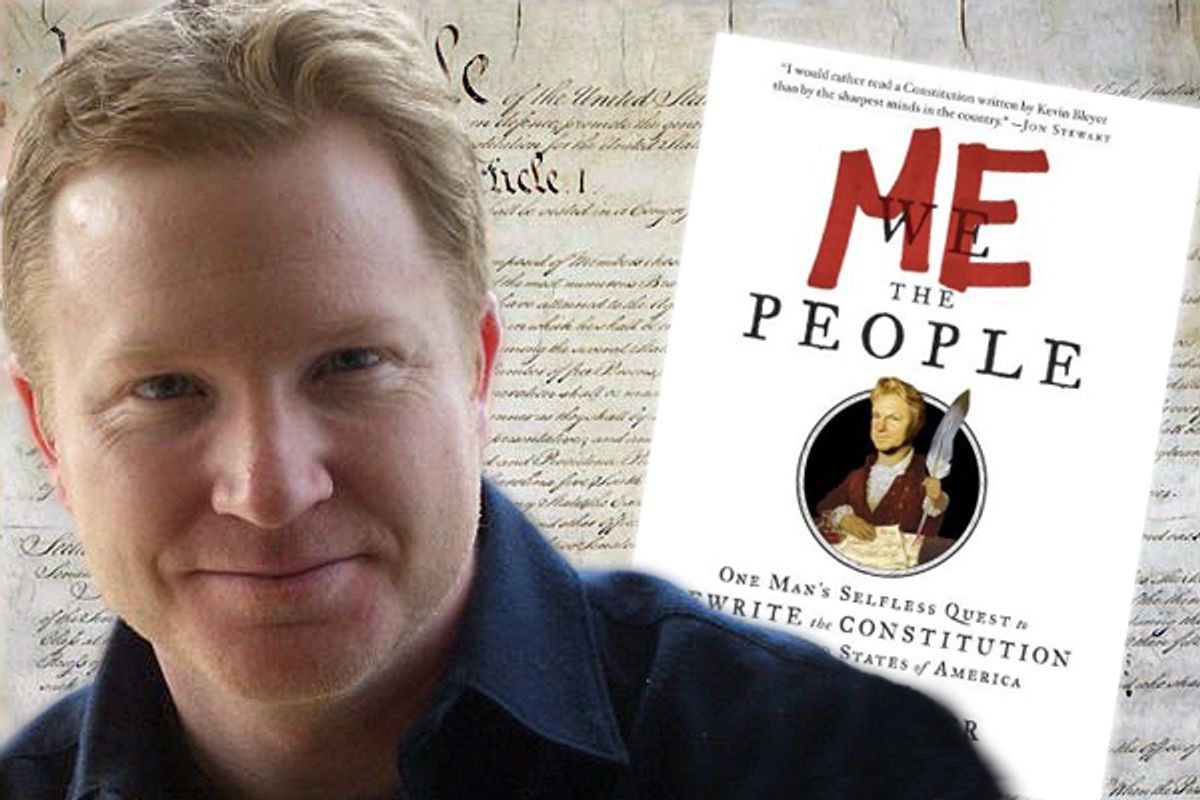 I once drove through Nebraska, via I-80, days after my girlfriend broke up with me, on a self-imposed road trip from Los Angeles to Cedar Rapids to find my brother’s shoulder and cry on it. It is a long, straight, hypnotically boring drive that not only gave me ample time to think about the loss, but also put my recent heartbreak in much-needed perspective.

It could be worse, I realized. I could live here.

Cold comfort, perhaps, but comfort nonetheless. And so, for providing the enforced monotony that only a dull road trip can provide, and the bleak void to which to compare my own relatively full life, I am grateful to the state of Nebraska. Nebraska has a special place in my heart.

It has no place, however, on a map of the United States.

Let me explain: California is a state. New York is a state. Texas, for the time being at least, is a state. And they deserve to be. They’re big, they’re boisterous — but most crucially, they’re populated. Thirty-seven million people live in California, four million in Los Angeles alone. New York is home to almost 20 million people. If California were a country, it would have the eighth largest economy in the world. If New York City were its own state, it would be the 12th largest — and in my humble New Yorker opinion, the best.

There are more Americans in prison than in Nebraska. And not for nothing, but as I drove past endless rows of cornstalks, I couldn’t help but think: What’s the difference? Nebraska, whose official state motto is “Equality Before the Law,” nonetheless feels like a punishment for a crime. And like a criminal, I whiled away the hours (or was it days?) thinking up mottoes that better apply: “Nebraska — a great place to serve some time.” “Nebraska — if you lived here, you’d be bored by now.” “Nebraska — Canada’s Mexico!”

Sure, the argument could be made that Nebraska is in fact an idyllic land full of picturesque cities with enviable small towns steeped in small-town values personified by some of the loveliest Americans to grace the planet — and, I confess, in my wildest dreams I often fantasize about living among them in such a glorious place — but let’s be honest: It’s also a lifeblood-sucking leech on our body politic. Yes, my fellow citizens, despite what the original Constitution of the United States says about the qualifications for statehood and the guarantee of representation in Congress, by every measure that truly matters in America (bigness, crowdedness, awesomeness, Texasness), Nebraska doesn’t deserve its star on the American flag.

Which is to say nothing about Montana (4th largest, 44th most populous).

Or the largest but 47th most populous state we call Alaska.

Add it up, and more than half of all Americans live in eight states. The big ones. The important ones. How many live in the eight least populated states? Less than 3 percent. Three percent — also known as the margin of error. (Which raises a terrifying scenario: It’s possible these states are completely empty.)

Yet what concerned me during my soul-deadening voyage toward Omaha was not whether these states deserve their claim on so much territory (they don’t), or whether, as guaranteed by Article I, they should be represented by two senators as powerful as the senators in states where people actually live (they shouldn’t). Rather, as my car sped past miles and miles of unharvested high-fructose corn syrup, my muscles atrophying and my eyes fluttering in and out of semi-consciousness, my mind was focused on Article IV. Because it is Article IV, the first in the Constitution to turn its full attention to the states rather than the branches of national government, that wants me to believe that Nebraska, this expanse of emptiness which so begs for my disdain, actually deserves my respect.

It reads, in part:

Section 1: Full Faith and Credit shall be given in each State to the public Acts, Records, and Judicial Proceedings of every other State.

Section 2: The Citizens of each State shall be entitled to all Privileges and Immunities of Citizens in the several States.*

Put plainly, Article IV makes a revolutionary claim: All states are created equal. Laws made in Alaska, which is known for its lawlessness, are as valid as laws made in Pennsylvania, which invented laws. Article IV insists that, as a nation, we should care as much about the Carolinas as we do about California. Montana  matters as much as Massachusetts. And New York is no better than any of its 49 neighbors — not even Nebraska. Which is, put even more plainly, ridiculous.

I should know. I’ve driven through Nebraska. I live in New York.

Was I thinking about the merits of giving “Full Faith and Credit” to each state as I drove through Nebraska? Not at all. At the time, I was merely thinking: I am soooooooo not a Nebraskan.

I was, at the time, a Californian. I had lived in the Golden State for four years, and as such, all of the rights and benefits of California residency were mine, all mine! I could serve on California juries, vote in California state elections, and draw California unemployment checks. Had I a major case of glaucoma or a minor case of cancer, in a few years I would even be eligible for my very own California-state-sanctioned, medically warranted marijuana — if I were, you know, into that type of thing. Citizenship has its privileges.

And Article IV is cool with that. It is designed to help me be a Californian even outside California. As written, it would guarantee that if I am granted certain “Privileges and Immunities” in my home state, all other states must also grant me those rights. I can thank Article IV for the fact that when I crossed the border from Colorado into Nebraska, I wasn’t immediately pulled over for not having a valid driver’s license. It is why when I stopped in North Platte to fill up my gas tank, the attendant couldn’t legally charge me $10 a gallon just because I wasn’t “from ’round these parts.” Although the Supreme Court has occasionally retreated to a more “limited interpretation” of Article IV — merely that states may not discriminate against citizens of other states in favor of its own citizens — it has always returned to the basic theme of Article IV: States must play nice with others, and do unto residents from other states as they would do unto their own.

Oklahoma must say to Oregon: Legal physician-assisted suicide? Not the way I would have done it, but I respect your choice. It looks good on you.

Oregonians must say to South Dakotans: Seriously? You’ll only provide abortions to a woman who has been raped if her life is at stake? Seems a bit heartless, but I guess that’s just another reason why we don’t live there.

This makes sense — I, for one, enjoy those regional quirks, and wouldn’t want to live in a country where I couldn’t tell Montana from Maine.

Yet Article IV isn’t all-powerful. As a referee between the states, it has its limits. The most famous check on Article IV, in fact, involved the states of New Jersey and Delaware, a boatload of purloined oysters, and George Washington’s nephew Bushrod. In 1832, Bushrod, then  a federal circuit court judge, ruled on a landmark case, Corfield v. Coryell. The question at hand was whether the state of New Jersey should be allowed to prohibit the plaintiff, Mr. Corfield (and all other non-Jerseyans), from gathering oysters found in the pristine waters off New Jersey (keep in mind, this was back in 1832, when New Jersey waters stood the chance of being pristine) only to return back to their home states to sell them for profit. Bushrod ruled that although the “Privileges and Immunities” protected by Article IV do include “the right of a citizen of one state to pass through any other state ... for the purposes of professional pursuits,” stealing oysters isn’t one of them. “We cannot accede to the proposition,” he wrote, “that the citizens of several States are permitted to participate in all the rights which belong exclusively to the citizens of any particular State, merely upon the ground that they are enjoyed by those citizens.”

Article IV doesn’t merely snub oystermen from Delaware. It fails to protect Mormons who might want to marry a dozen sister-wives in Utah and expect Vermont to approve of their polygamous bliss, or gun-toting Kentuckians who want to bring their semiautomatics to church while visiting gun-skittish Maryland. These, too, go too far.

But what if I’m not a Delaware oysterman or a Utahan missionary or an armed Kentuckian? What if I am, say, a gay Iowan? And instead of illegally gathering winkles in Weehawken or wives in Salt Lake City, I have gotten legally married in Iowa — which sanctioned gay marriage way back in 2009. And what if I wanted to celebrate the nuptials with a road trip through Nebraska? (I’m not sure why I’d do that, but just roll with me.) Would Article IV compel Nebraskans to recognize my marriage?

Congress has tried to say no. In 1996, it passed the Defense of Marriage Act, citing the broad power Article IV gives Congress — brace yourself for some gobbledygook — to “prescribe the Manner in which such Acts ... shall be proved, and the Effect thereof.” Which, if you ask me, makes about as much sense as in which such Sentences ... shall be understood, and the Nonsense thereabouts.

Now, such gibberish would baffle a normal human; to Congress, however, it made perfect sense. It determined, conveniently, that if could limit “the Effect” that gay marriage would have as it traveled the nation, it could also prescribe that it must have no effect at all — which is to say, it could give states the power to ignore gay marriages entirely. The Harvard constitutional scholar Laurence Tribe has called this linguistic tap dance “a play on words, not a legal argument,” which forms in us the bad habit of creating “categorical exceptions” to Article IV, when Congress has no such power.

Neither side is happy with the arrangement. Gay couples, skeptical that the  federal government will ever give them that wedding day owed to them, want to see more states legalize gay marriage; opponents of gay marriage, fearful that gays might spontaneously band together and attack their northern border brandishing Le Creuset spatulas and Rufus Wainwright CDs, want to see nothing less than a constitutional amendment defining marriage as between a man and a woman. It’s all very confusing. What’s a gay couple to do — other than plan their honeymoon in San Francisco?

It is this competition, between what one state might want for its citizens and what another state might demand for its own, that Article IV is supposed to referee. Yet it hasn’t. It doesn’t. And what’s more — with all due respect to our nation’s homosexual polygamist mollusk aficionados — its failure to do so has meant repercussions far greater than a marriage license, or a second wife, or cheap, tasty New Jersey seafood: Namely, Article IV, with its schoolyard devotion to fair play and radical equality, has done something far more treacherous.

It started the Civil War.