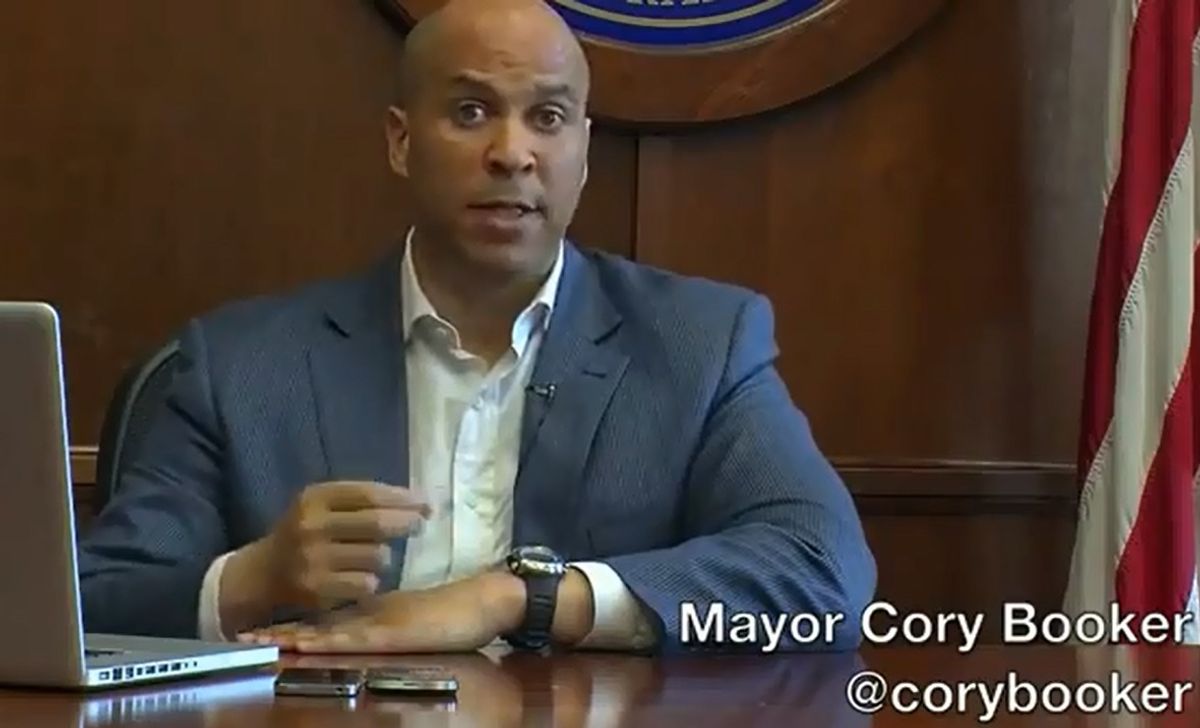 It didn’t take long for Cory Booker to get the message. Just hours after undermining the Obama campaign’s main line of attack against Mitt Romney, the Newark mayor released a video late Sunday afternoon in an effort to repair some of the damage.

Booker had seemed to pronounce the Obama effort to highlight unflattering aspects of Romney’s private equity background “nauseating,” but in the video, he suggested he was making a broader statement about negative campaigning.

“I used the word ‘nauseating’ on ‘Meet the Press’ because that’s really how I feel when I see people in my city struggling with real issues and still feeling the challenges of this economy, and still looking for hope and opportunity and real specific plans,” Booker said. “I get very upset when I see such a level of dialogue and calls to our lowest common denominator.”

But he insisted that he sees Bain as a legitimate topic for Obama to raise: “Let me be clear. Mitt Romney has made his business record a centerpiece of his campaign. He’s talked about himself as a job creator. And therefore it is reasonable -- and in fact I encourage it -- for the Obama campaign to examine that record and discuss it. I have no problem with that.”

Booker’s new line is a bit hard to swallow, though, because his “Meet the Press” comments clearly went beyond simply decrying the tone of the campaign. At one point, he offered a pointed defense of Romney’s Bain past, saying:  “I’m not about to sit here and indict private equity. If you look at the totality of Bain Capital’s record, it -- they’ve done a lot to support businesses, to grow businesses. And this to me -- I’m very uncomfortable.”

An RNC spokesman told Politico that “it's clear this video was orchestrated by the Obama campaign,” which certainly sounds plausible. Shortly after Booker posted his clarification, an Obama campaign press secretary tweeted out a link to a condensed version of it featuring only Booker’s statement about Bain being fair game.

As I noted yesterday, Booker has throughout his political career cultivated and maintained close ties to Wall Street and affluent, investor class donors – people who, in many cases, believe the administration has declared war on their world and see the Bain attacks as an extension of that effort. Booker’s statewide political aspirations are no secret in New Jersey, and the presumption is that he’s eyeing a Senate run in 2014 (others have mentioned him for governor next year, but that’s less likely for a number of reasons).

Booker’s actions on Sunday are best understood in that context. In sticking up for private equity, he was tending to a financial base that’s been there for him before and that he’ll need in the future. Running ads in the New York and Philadelphia markets is an expensive proposition, so Booker will need a ton of cash for a statewide run. And in rushing to clarify (but not exactly retract) what he said, Booker was trying to contain the damage with a Democratic Party base that likes Obama and has no problem with his attacks on Bain.

In a way, the episode is simply a high-profile illustration of the very real tension that exists, especially in the New York area, between elite Democratic donors and rank-and-file voters. Booker is hardly the only tri-state region Democrat who’s cultivated Wall Street, but in 2012 not many are as open about it as he is.