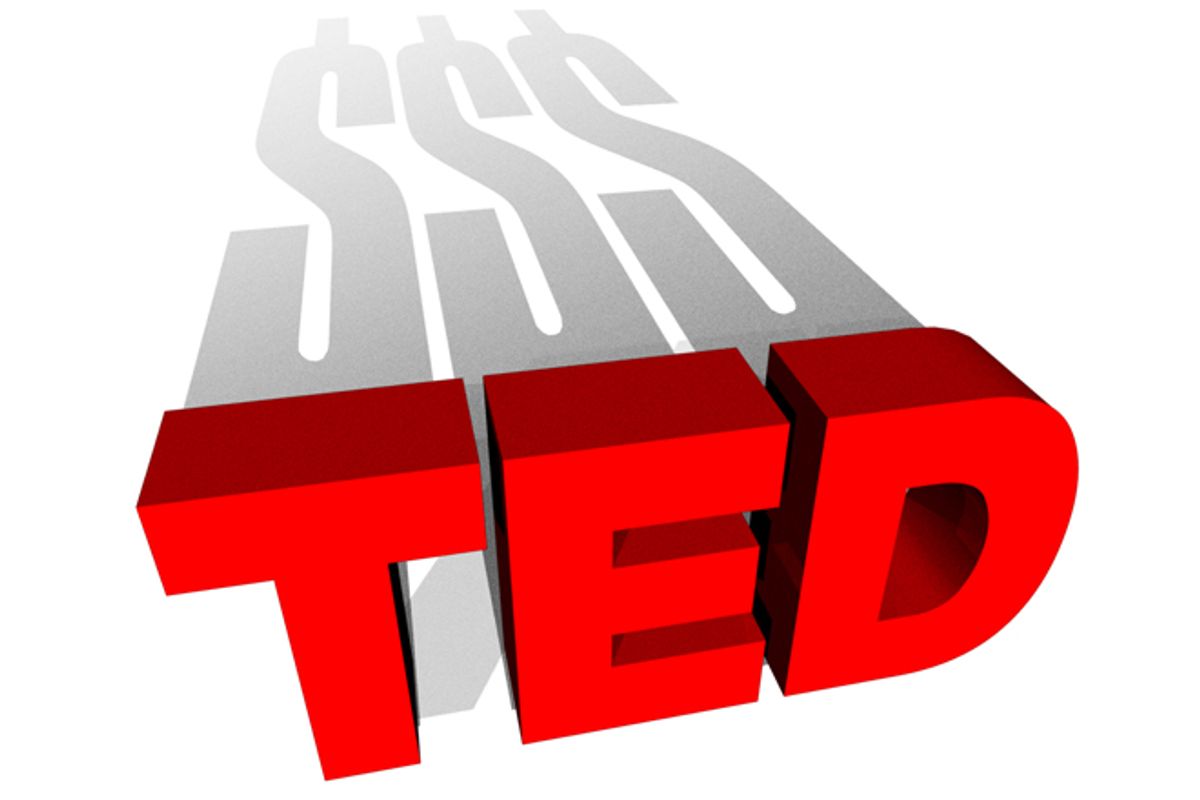 There was a bit of a scandal last week when it was reported that a TED Talk on income equality had been censored. That turned out to be not quite the entire story. Nick Hanauer, a venture capitalist with a book out on income inequality, was invited to speak at a TED function. He spoke for a few minutes, making the argument that rich people like himself are not in fact job creators and that they should be taxed at a higher rate.

The talk seemed reasonably well-received by the audience, but TED "curator" Chris Anderson told Hanauer that it would not be featured on TED's site, in part because the audience response was mixed but also because it was too political and this was an "election year."

Hanauer had his PR people go to the press immediately and accused TED of censorship, which is obnoxious -- TED didn't have to host his talk, obviously, and his talk was not hugely revelatory for anyone familiar with recent writings on income inequity from a variety of experts -- but Anderson's responses were still a good distillation of TED's ideology.

In case you're unfamiliar with TED, it is a series of short lectures on a variety of subjects that stream on the Internet, for free. That's it, really, or at least that is all that TED is to most of the people who have even heard of it. For an elite few, though, TED is something more: a lifestyle, an ethos, a bunch of overpriced networking events featuring live entertainment from smart and occasionally famous people.

Before streaming video, TED was a conference -- it is not named for a person, but stands for "technology, entertainment and design" -- organized by celebrated "information architect" (fancy graphic designer) Richard Saul Wurman. Wurman sold the conference, in 2002, to a nonprofit foundation started and run by former publisher and longtime do-gooder Chris Anderson (not the Chris Anderson of Wired). Anderson grew TED from a woolly conference for rich Silicon Valley millionaire nerds to a giant global brand. It has since become a much more exclusive, expensive elite networking experience with a much more prominent public face -- the little streaming videos of lectures.

According to a 2010 piece in Fast Company, the trade journal of the breathless bullshit industry, the people behind TED are "creating a new Harvard — the first new top-prestige education brand in more than 100 years." Well! That's certainly saying... something. (What it's mostly saying is "This is a Fast Company story about some overhyped Internet thing.")

To even attend a TED conference requires not just a donation of between $7,500 and $125,000, but also a complicated admissions process in which the TED people determine whether you're TED material; so, as Maura Johnston says, maybe it's got more in common with Harvard than is initially apparent.

Strip away the hype and you're left with a reasonably good video podcast with delusions of grandeur. For most of the millions of people who watch TED videos at the office, it's a middlebrow diversion and a source of factoids to use on your friends. Except TED thinks it's changing the world, like if "This American Life" suddenly mistook itself for Doctors Without Borders.

The model for your standard TED talk is a late-period Malcolm Gladwell book chapter. Common tropes include:

What's most important is a sort of genial feel-good sense that everything will be OK, thanks in large part to the brilliance and beneficence of TED conference attendees. (Well, that and a bit of Vegas magician-with-PowerPoint stagecraft.)

Look at Jonathan Haidt's talk on morality and its relation to political preference, which Dave Weigel linked to as an example of a political TED talk.

It's a very good TED talk, and a good précis on Haidt's interesting work. It's also full of dubious assertions that Haidt doesn't really have time to support with relevant arguments or data (morality is an evolutionary adaption -- that is, biological?), gross flattery of the audience ("This is an amazing group of people who are doing so much, using so much of their talent, their brilliance, their energy, their money, to make the world a better place, to fight -- to fight wrongs, to solve problems"), and some decidedly flaky material on the superiority of Eastern religions. (There is, at least, no techno-utopianism to be found.)

And Haidt is talking about politics, or liberalism, in the way it's commonly defined by the sort of liberal rich people who make up the majority of the media elite and the Hollywood elite and even the (more libertarian) Silicon Valley elite: "social liberalism." He is talking about moral issues, and while economic issues are also moral, he does not mention social justice or economic redistributionism.

Because TED is for, and by, unbelievably rich people, they tiptoe around questions of the justness of a society that rewards TED attendees so much for what usually amounts to a series of lucky breaks. Anderson says he declined to promote the Hanauer talk because it was "mediocre" (that has never once stopped TED before, but we needn't get too deep into that), but an email from Anderson to Hanauer on the decision was more a critique of Hanauer's thesis than a criticism of his performance. Anderson cited, specifically, his concern that "a lot of business managers and entrepreneurs would feel insulted" by the argument that multimillionaire executives hire more employees only as a "last resort." (The entire recent history of the fixation on short-term returns, obsession with "efficiency,"  and "streamlining" of most American corporations escaped the notice of Mr. Anderson, apparently.) I can't imagine this line-by-line response to all the points raised in a TED Talk happening for an "expert" on any subject other than the general uselessness and self-importance of self-proclaimed millionaire "job creators."

On his blog, Anderson attempted to deflate the growing anti-TED outrage by saying that while he supported Hanauer's "overall stance" (a claim belied by his email to Hanauer), the talk was not good enough to merit posting.

At TED we post one talk a day on our home page. We're drawing from a pool of 250+ that we record at our own conferences each year and up to 10,000 recorded at the various TEDx events around the world, not to mention our other conference partners. Our policy is to post only talks that are truly special. And we try to steer clear of talks that are bound to descend into the same dismal partisan head-butting people can find every day elsewhere in the media.

The word "partisan" or variations on it appear three times in Anderson's explanation. The words "Democrat" and "Republican" appear only once in Hanauer's talk, at the very beginning.

Anderson is using "partisanship" the same way idiotic centrist pundits like Thomas Friedman do: as a meaningless catch-all term for any political action or belief that they disagree with. "Nonpartisanship" is, as always, defined as "whatever I think is reasonable and correct." Hanauer's argument is certainly left-leaning, but it's not "partisan" -- the Democratic Party helped usher in our new Gilded Age, and its leaders do not have an anti-income-inequality platform, even if Democrats are more likely to speak out on the subject than Republicans.

"Partisan" is the word that reveals how full of shit Anderson is, even if he doesn't know it. This is the blinding ideology of the globe-trotting do-gooder billionaire class that mistakes its self-evident dogma for a pure lack of ideology.

The people at Davos and in Aspen also think they're saving the world, and the majority of them are also deeply involved in making it much worse for people who can't afford to go to Davos and Aspen. It is no wonder at all that a talk on how their voluntary charity can better the lives of the unwashed is received with much more enthusiasm than one on how a better use for their money would be for them to have much less of it and everyone else a little more.

Hanauer's talk was remarkably dry -- and I am sure that was part of the reason for its burying, because TED truly values flash and surprise over substance -- and not remotely mistakable for a pro-Democratic Party stump speech. But its central message was incompatible with the TED ethos: that TED People Are Good for the World.