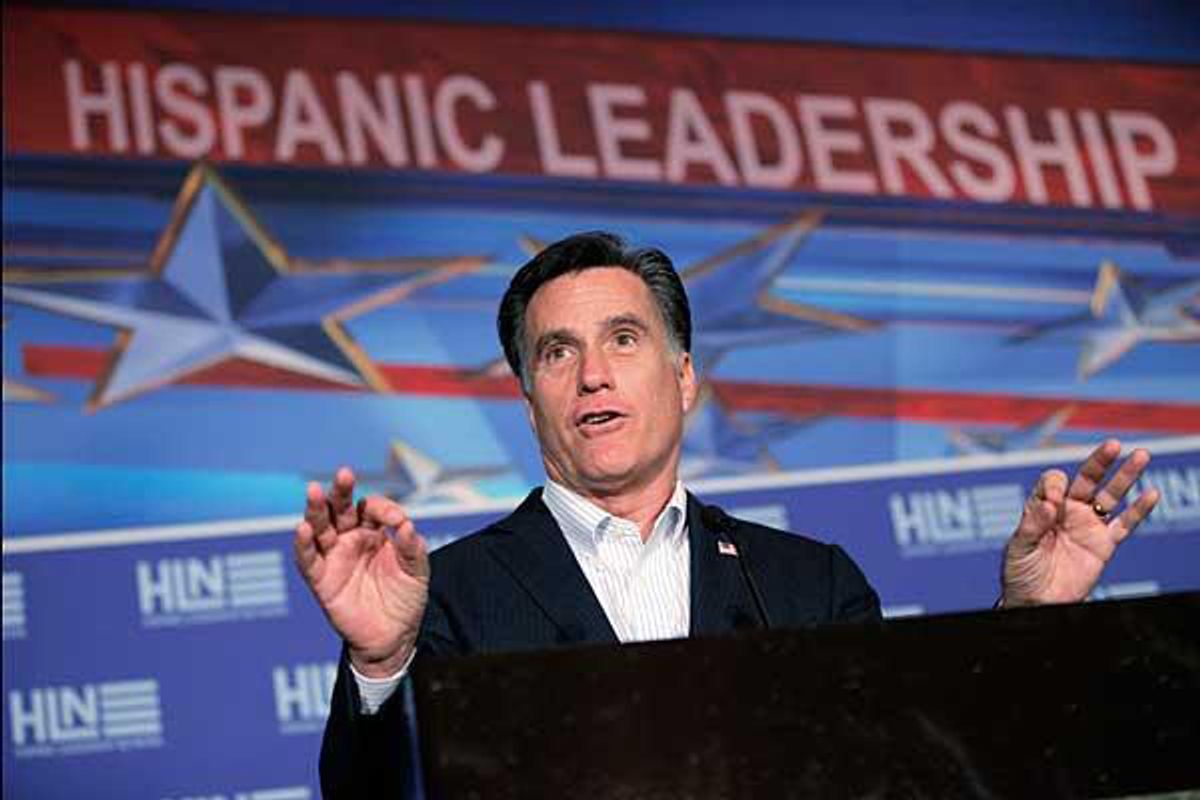 As part of an effort to win back Latino voters, Mitt Romney will address a conservative Latino business group this week that has advocated immigration policy views in stark contrast to his own. Romney’s “self-deportation” policy put him well to the right of many of his GOP primary challengers, and the Latino Coalition once slammed “right-wing extremists” who opposed comprehensive immigration reform.

The presumed GOP nominee’s Wednesday speech to the Latino Coalition comes as polls show Romney way behind President Obama among Latino voters and with little hope of capturing the 44 percent of the bloc George W. Bush won in 2004, a highwater mark for the GOP.  Even New Mexico Gov. Susana Martinez (R) -- whom Romney floated as a potential vice-presidential choice -- mocked the presumed GOP’s immigration policy last week.

The Romney campaign’s response has been that immigration is irrelevant to winning over Latino voters -- jobs and the economy are the only things that matter. But his speech this week underscores just how difficult an argument that will be for him to make: In the past, the Latino Coalition has argued that immigration reform is part of a pro-business platform, not separate from it.

These days, the only immigration issue the Coalition mentions on its website is the “Mexican Trucking issue.” But the group aggressively advocated for comprehensive immigration reform under President Bush. In 2007, the Coalition’s president slammed “far right extremists” who opposed “common-sense [immigration reform] legislation that is so important for the security and economic vitality of our country.” The group “urge[d] Speaker Nancy Pelosi (D-CA) and the Democratic leadership in the House to demonstrate courage and leadership on this issue and take on immigration reform,” saying Pelosi could pass a bill “without the level of Republican support she is demanding.”

In the 2008 GOP primary, the Latino Coalition favored Rudy Giuliani -- a veritable leftist on immigration reform compared to most Republicans -- with the former New York mayor capturing 64 percent of the vote in a straw poll of the group’s members. Romney apparently finished behind Sen. John McCain and former Sen. Fred Thompson, as his name was not mentioned in the statement.

Meanwhile, the Chamber of Commerce, whose grand D.C. offices will host the event Wednesday, also supported comprehensive reform under Bush, similarly seeing it as a boon for free market capitalism. The powerful business lobby still calls for “an effective and streamlined temporary worker program so that employers can hire immigrant workers” and “a pathway to legal status for undocumented workers currently in the United States.”

This was essentially Bush’s policy too. But Romney’s infamous immigration advisor, Kansas Secretary of State Kris Kobach, who authored the draconian anti-immigration laws in Arizona and Alabama, said his candidate would not support any kind of pathway to legalization for undocumented immigrants.

The Romney campaign briefly attempted to disown Kobach after Romney won the primary and the advisor’s utility was spent, but he may have to throw his entire immigration policy under the bus with Kobach if he hopes to win over the Latino business owners on Wednesday, let alone Hispanic voters more generally.