Our most dangerous hike

When a casual excursion turned dangerous, I didn't know if it would end my relationship, or define it 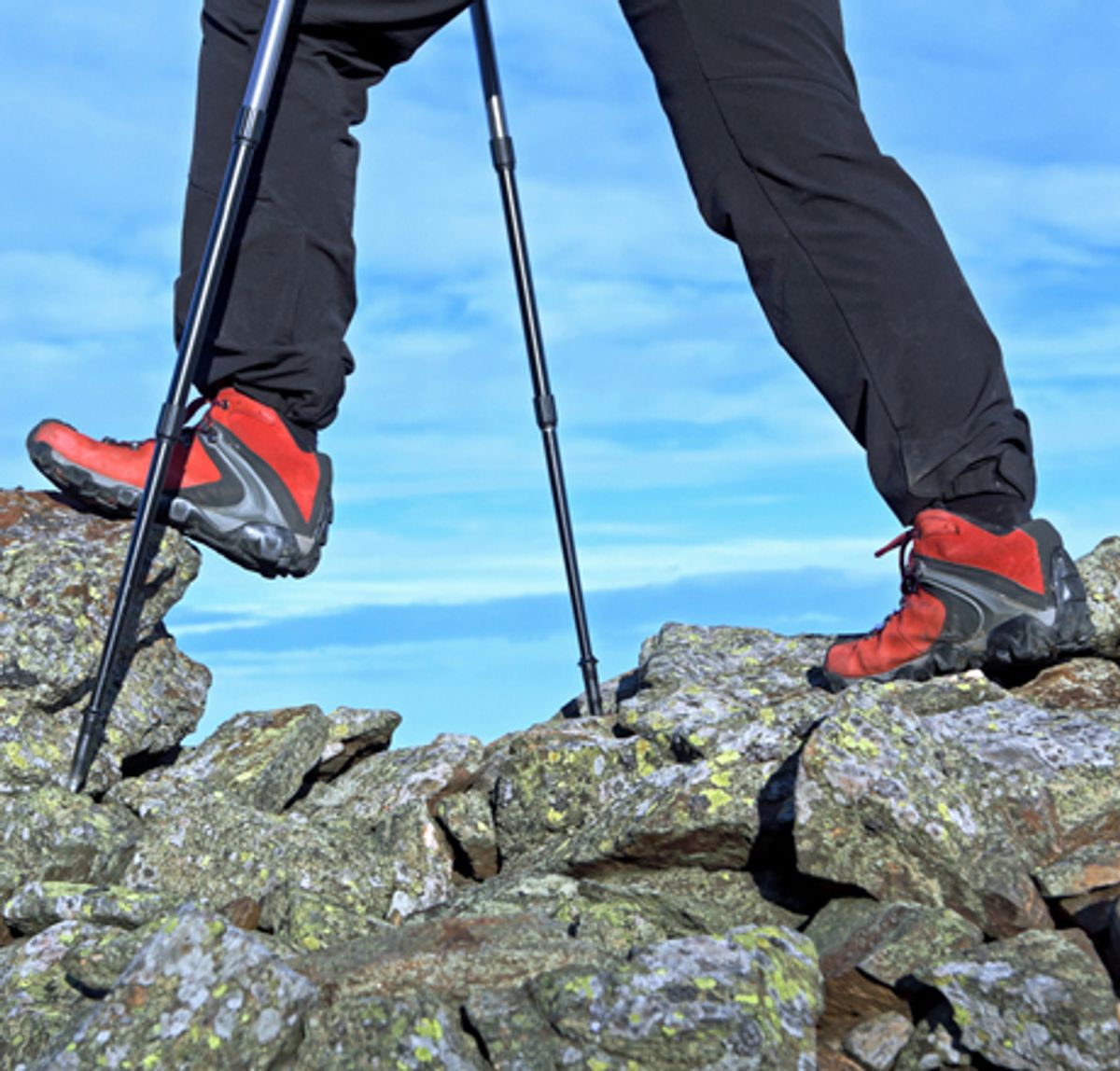 At 6 years old, I reluctantly joined my Brownie troop on an all-day hike into the woods, and two days later, my appendix burst. I blamed the woods. Maybe it was the grit at the bottom of my Thermos, which my troop leader had told me to ignore. Maybe my appendix was allergic to the outdoors. (“Maybe it’s because you suck on your hair,” my mom said, a habit she regularly predicted would lead to my ruin.) Soon after, I quit Brownies and never went hiking again.

Until age 26. I was in a faltering relationship with a man who loved hiking and camping, and who sincerely believed that I would love these activities too, if he could be my guide.

V was the first Indian-American I’d ever met who actually liked to camp. I’d always associated camping with white people, along with sunbathing and being grounded, but here was V at REI — testing compasses, lusting after tents — with a thrilled, drifting look in his eye. I kept thinking about a term that a friend and hiking enthusiast had once taught me — “poop trowel” — two words that returned to me now with great foreboding.

But as I trailed along, I found myself vaguely infected by V’s enthusiasm. It was one of the things I liked best about him, his ready embrace of adventure. He had once done a seven-day solo hike through the Himalayas, sans guide, and slept at a tea house each night. Before I bought a bicycle, V got me to double on his and we rode all around New York City that way, though it took me a while to loosen my clench on his waist.

Ironically, it was that very sense of adventure that seemed to prove us incompatible. We were plagued by the question of where we would live for the next 10 to 20 years, if we were to get married. Prior to meeting me, V had spent a year in rural India and three years in Sierra Leone. He had always envisioned living and working abroad, either in India or Africa; I had never even entertained the possibility. The question of where led to a multitude of what ifs. We tried coming up with timelines and spreadsheets that would fulfill both our geographical needs. Google Docs became a primary form of correspondence.

I think we both believed that we would soon be parting ways, and that this camping trip would be some lovely, pastoral memory we would linger over, long from now, when we were married to other people. I agreed to go hiking, mostly because of his enthusiasm, and how much I would miss it.

Not 15 minutes into our hike, I was faced with a number of immutable truths — that my backpack was the approximate shape and weight of a mini-fridge, that my one prized possession, a king-size Hershey bar, was somewhere in his backpack instead of mine, that we had to first ascend a mountain in order to descend it. V went ahead of me, leaping from stone to stone, chatty and upbeat, immune to my slightly exaggerated mouth-breathing. The first bad sign came early on, when we were met by a hiker descending the mountain. He said that the weather, on his way up, had grown so chilly and cloudy that he’d decided not to go above treeline. We told the hiker where we were planning to go: up the mountain, along the ridge, through a ravine, along another ridge, and into a colony of shelters by sundown.

The hiker took one look at me in my oversize yellow poncho, bowed under the weight of my mini-fridge, and asked for our full names. "Just in case,” he said, leaving off the rest.

This is the point in the TV movie where you curse the foolish hikers and urge them to turn back. In our defense, a park ranger had initially approved our route, had even guessed that a yellow blob like me could tackle the whole journey without a problem. The views, he said, would be worth it.

But at the top of the mountain, the landscape turned lunar, drained of color, bereft of plant life. We stood among the gray rock, surrounded by cloud on all sides, a far cry from the turning leaves we had come to see, the livid orange and garnet that lavished the slopes at this time of year. This was a more desolate beauty, remote and isolating. But we’d been planning this trip for weeks, and after a mere hour of suffering and no sign of those magical, mist-clad mountains, we weren’t about to turn back around.

I decided to adopt a certain philosophy toward the hike, which was something like my approach to life at 26: I don't know where I am but I'm keeping on. I was living in New York City, working as an assistant editor on a documentary film, writing my first novel in the evenings, and trying to negotiate with the mouse that lived in the bowels of my gas stove. Around that time, I read Rilke’s “Letters to a Young Poet,” in which I’d starred these lines: "Try to love the questions themselves, like locked rooms and like books written in a foreign language. Do not now look for the answers. They cannot now be given to you because you could not live them. It is a question of experiencing everything. At present you need to live the question."

As the hike went on, I found myself living a lot of questions. I kept waiting for the visual rewards that the White Mountains website had promised us — a sapphire lake, a giant, sleepy moose — but no. The uphill climb flattened out into a hostile field of gray boulders. Buffeted by wind and nearly horizontal rain, I struggled to keep my balance.

And I learned another word — “cairns” — cryptic little piles of stones that marked the trail. Those stone snowmen became for me tiny totems of authority and hope in our increasingly bleak surroundings. After we crossed the boulder field, we checked the map. We weren’t covering enough ground to stick to our original plan. We had no time to sit and eat. Instead we took turns shoveling mixed nuts into our mouths from a sweaty Ziploc bag, and though I hate mixed nuts, I nibbled with a feral intensity.

Cold and wet and miserable, I focused on composing a series of speeches, which I planned to deliver as soon as we found ourselves within reach of a proper toilet. Rhetorical questions included: Why couldn’t we have started with a day hike? Why didn’t we obey the several signposts that read, DO NOT GO PAST THIS SIGN? But the light was fading too quickly to pause and interrogate. The sun had begun to set by the time we reached the ravine, a steep descent among jagged rocks and a rather anemic stream. We had no choice but to strap on our headlights, like miners, and scoot from stone to wet stone on our rears. Propelled by resentment, I led the way.

At some point, I turned and noticed that V had fallen a good bit behind. When he finally reached me, he showed me his hands, which were pale and trembling slightly. His lips were going numb, making it difficult to talk. Hypothermia, he guessed. I could see he was scared. I pressed his wet-gloved hands between mine. It didn’t help.

We went on boulder-scooting, slowly now. Every so often, I called behind and he replied, but if his voice was too distant, I waited until he reached me. Soon, the dark engulfed us completely, and all I could see was the small tunnel of light from my headlamp, brightening the few steps ahead but nothing more. The snowman totems were lost to us. Our map had fallen apart. All we had was the sound of our names in the dark, or I’m here, or Go on.

It was pitch black when we reached the bottom of the ravine, and yet instantly warmer below treeline. We stumbled along what we thought was the trail and finally arrived at a group of rickety lean-to’s in which hikers could pitch their tents. Climbing into a lean-to, I felt an almost deranged euphoria. I didn’t even mind, later that night, when we realized that V’s sleeping bag had been soaked through by the rain. We stuffed ourselves into my lady-size sleeping bag, packed so tight that I couldn’t move my torso or legs, a sort of two-headed sausage. As was his custom, V fell asleep within minutes. Exhausted as I was, I lay awake, listening to him snore, never so content to be partially paralyzed next to another.

As I write this, I’m in New Delhi and V is in Mozambique, but usually we live in Washington, D.C. We got married two years after our White Mountains hike, and while we spend some months out of each year in different countries, I’ve come to believe that the question of where we’ll live 15 years from now is as foggy as who we will be. Ours is a marriage that some of my relatives call “modern,” and by modern, I think they mean inscrutable.

And as married folk do, we’ve recounted That Time We Went Hiking to our friends so often that we can call up the smallest details, like the squirrel scratching all night at the skin of our tent. (Another rodent negotiation.) What I don’t remember as readily is the growing panic, the uncertainty behind every step. The memory of that fear fades a bit with every telling.

In retrospect, the happy ending of our hike seems a fated eventuality, but logic — and a hundred other hiker horror stories — suggest otherwise. There is a multitude of other routes the story could have taken, that our story could still take, twists and boulder-scooting turns that no Google Doc spreadsheet could foresee. Such is the wilderness of marriage. We continue calling across the dark, across continents, and so long as the other answers, I’m here, we are safe; we keep on.

Tania James' new book of stories "Aerogrammes" is now out from Knopf. She is the author of a novel "Atlas of Unknowns," and her writing has appeared in Boston Review, Granta, Kenyon Review, One Story, Orion, and The New York Times. Visit her at www.taniajames.com or on Twitter at @taniajam.