The recent protests in Montreal shows how a powerful movement responds to tuition hikes. How can we do the same? 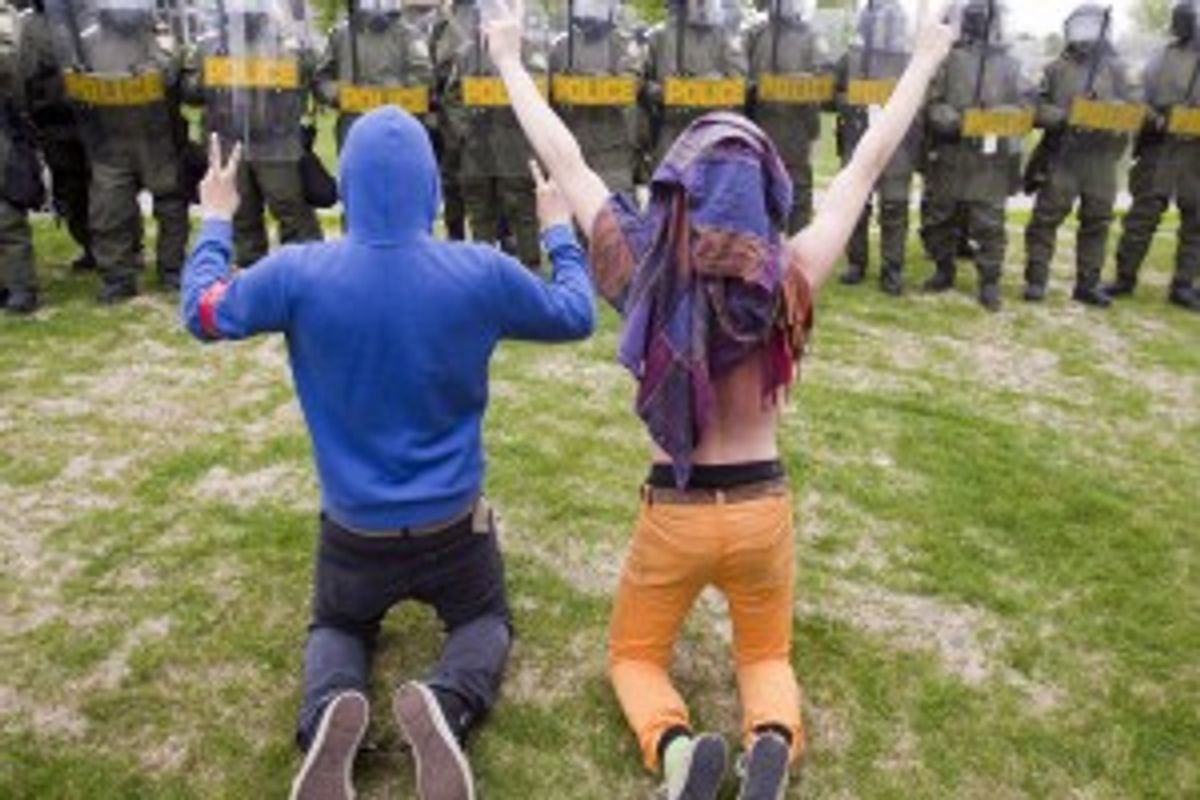 Students protesting against tuition hikes kneel in front of a line of Quebec Provincial Police at the Lionel Groulx college Tuesday, May 15, 2012 in Ste. Therese, Quebec, Canada. (AP Photo)
--

We students have become morbid about our future. On campuses nationwide, it has become commonplace to see activists holding mock funerals for public higher education. At Brooklyn College at the City University of New York, we too held a funeral procession: out on the quad, in front of a coffin filled to the brim with diplomas, students were able to stand up in front of their peers and share what the death of higher education meant to them. One student, bravely holding back tears, shared how her troubles with financial aid, in addition to the death of her father, had made it impossible for her to continue her degree this semester.

For the majority of us seeking degrees, higher education is indeed dying a slow and painful death. Too little considered, however, is the role we as students are playing in its demise. The combination of tuition hikes, a lack of democratic governance in our schools, ballooning student debt, and the intimate relationship between our financial institutions and our academic ones are certainly killing higher education – but what is killing the student movement is our own complacency with these policies. While here in America, students on many campuses have limited themselves to mourning, elsewhere in the world they have taken to the streets – and there is much we can learn from their activism, in order to better our own.

What We Learned from the Maple Spring

Over spring break this year, we were privileged to travel to Montreal, Quebec, where we witnessed their 200,000-person-strong student strike. In the city of Montreal, francophone students have effectively shut down universities in response to a $1,625 tuition hike, proposed to be implemented incrementally over a five-year period. Since February, they have filled the streets en masse in protest, and as of this writing, they remain on strike (despite some injunctions by fellow students), having refused a set of “concessions” recently proffered by the Quebec government. (The government’s new proposal actually amounted to an increase of the previously proposed tuition hike, though it would have spread the increase out over an extended period of time – seven years, rather than the originally proposed five.)

The position Quebec’s students find themselves in is not unique: at CUNY, we too are facing a tuition hike of $1,500 over the next five years. What has been unique is their ability to build a powerful movement in response to these increases. Here at home, our response has come nowhere close to matching what we saw in Montreal.

When tuition has gone up at CUNY over the past few years we have responded with a rally here and there; it has been decades since students have been able to effectively shut down the university. The 1960s was the last time we saw mass student protests and building occupations at CUNY; the result was the opening of the university’s doors to students of color – and unfortunately, the transformation of what had once been called the "free academy” (where state funding once fully covered the cost of education) into an institution where tuition became a mandatory part of enrollment.

What allowed our counterparts in Quebec to mobilize so quickly and with such numbers, when our own student response to similar increases has been so subdued? We realized that the main difference lies in their movement’s ability to obtain real, institutionalized student power – something we do not yet have in the United States.

In Quebec, student organizing bodies on campuses have equal seats at decision-making tables alongside faculty and the administration. In the United States, we have nothing like this. Just as unions have been on a steep decline in this nation for decades, so too have campus organizations that answer to students (rather than the whims of the administration) and that hold real power. We believe that if students in the United States hope to have the kind of impact on our universities that we witnessed in Montreal, we will need to first establish radical, federated student unions here at home, organizations capable of replacing our currently weak systems of student participation. Without this shift, our struggle will be long, indeed.

Still, there are aspects of the Maple Spring we must refuse to replicate. For instance, the Quebec strike has not yet adopted anti-racist analysis regarding what true access to higher education might look like. Many of the students of color we spoke with offered mixed reviews of the student associations and the representation of racialized people in the movement. While they all clearly asserted they were anti-tuition hike, they also said they would feel more comfortable voicing and expressing solidarity if the movement adopted an anti-racism platform as a component of the strike.

Though anti-racism is and always has been a part of the analysis of the CUNY student struggle – from the 1969 occupations of City College and Brooklyn College by Puerto Rican and African-American students, to the Student Liberation Action Movement (SLAM) at Hunter College in the mid-1990s – not every campus has been so thoughtful about the role race plays in access to higher ed. As we build a national movement for student power we must maintain our vigilance in keeping these issues at the center of our work.

How do we begin to establish the structures of power we need? The task may seem daunting, but at the Edufactory’s University is Ours! Conference we attended in Toronto at the end of April, we gained even more insight from our comrades to the North about how we might start. For instance, building toward a new student unionism from within departments – where we and our classmates are already organized into majors and similar academic interests – could be an effective way to gain momentum and generate collective buy-in from communities that already exist. These departmental unions would then become part of a larger, university-wide student union, would bridge the interests of many separate groups, and join them into an organized and non-hierarchical governing body. This is a model of organizing student unionism that has roots stretching back to the 1960s – and has been used to great effective in Quebec.

As Jasper Conner points out in his treatise, Towards a New Student Unionism,

“In Quebec, University unions take action when department unions put forward proposals to the rest of the campus. University unions are where students coordinate on things that affect all students, but again, don’t make decisions on issues that don’t affect all students. [Student] unions would follow this pattern, federating outward to the state level where most issues of funding are decided, at least for state schools.”

It isn’t nearly as hierarchical as it sounds; in fact, the larger bodies proposed here would be made up of delegates, as well as assemblies much like the spokescouncil institutionalized by Occupy Wall Street last fall. Furthermore, student unionism structured in this way also addresses important feminist and anti-racist critiques around lack of accountability in our movement leadership, which often leads to the reproduction of social hierarchy and the continuation of organizational practices that exclude women and people of color from the decision making process.

Alongside strategic unionizing, it seems to us self-evident that occupation of physical spaces must play a larger part in student organizing in the future. Occupy Wall Street was not the first movement to emphasize occupations as a key tactic; the US student movement has a rich history of reclaiming administrative offices in order to achieve our goals. At CUNY, the student movement has begun to move in this direction: in recent weeks, we at Brooklyn College launched a mass student day of action to protest tuition hikes, which included a rally and sit-in at Boylan Hall -- right outside the office of the president. Street protests in other parts of the city are now taking place as well. It is a good beginning, but it is only that. We need so much more.

Given how profoundly US students have been cut off from channels of power at universities, the road before us may be long. But if we hope to achieve our goals, we first must realize, collectively, that the social conditions we face as students are not inevitable. We can’t just erect tents in the middle of our campuses and expect the world to change around us. We need to take control of our own minds, as well as take space. Only then will we breathe new life into our educational system.

Isabelle Nastasia is an undergraduate student in the CUNY Baccalaureatte Program studying critical pedagogy and intersectionality. She is a co-founder of the New York to New Orleans Coalition, a youth-led service-learning organization.