She’s as confident as ever, but this could be the last time Nancy Pelosi leads House Democrats into an election 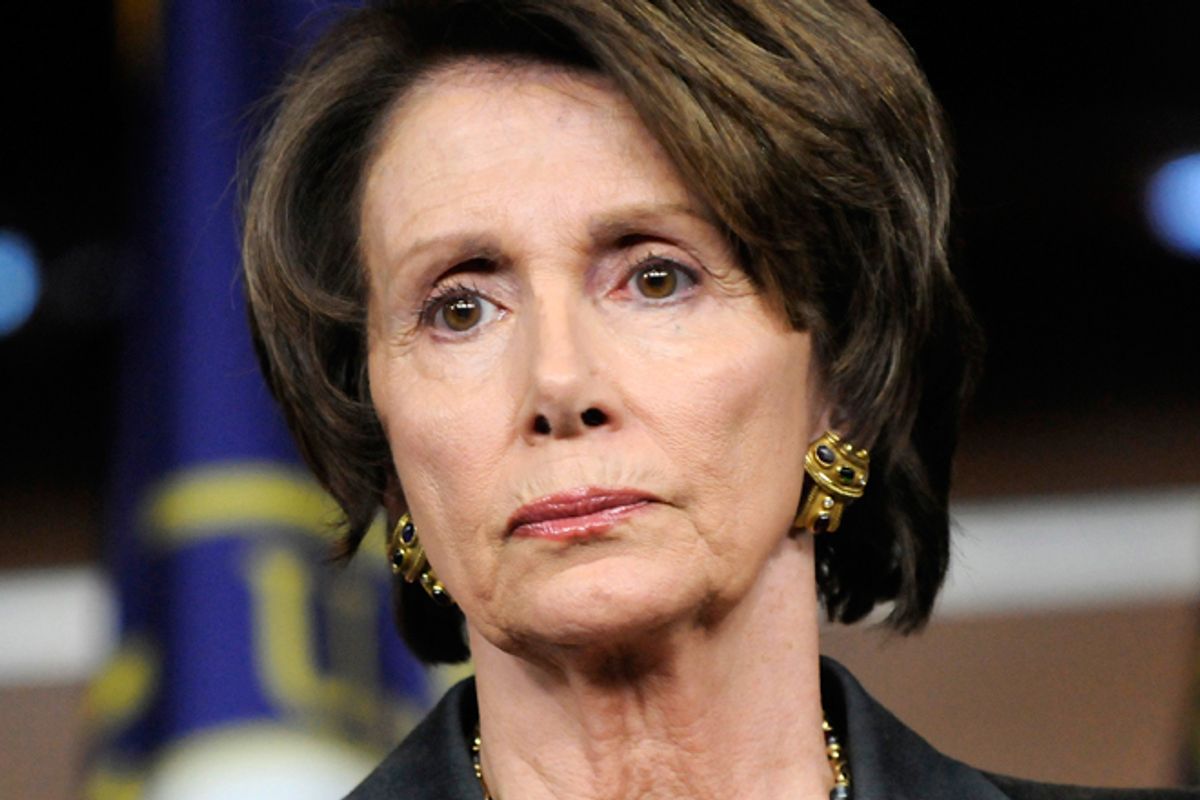 Talk to Democrats on Capitol Hill and one impression jumps out: This might be it for Nancy Pelosi.

The current House minority leader and former Speaker made one of her periodic Sunday show appearances yesterday, issuing a confident assessment of her party’s November prospects on ABC’s “This Week.” Noting that Speaker John Boehner recently said there’s a one-in-three chance Republicans will lose their House majority, Pelosi said, “I think it’s bigger than that. But what he did say that’s correct was that there are about 50 Republican seats in play. I would say 75. I feel pretty good about where we are.”

Take this with a grain of salt. It’s basically the same thing Pelosi says every election year around this time. That’s just her job. But while her public posture remains as steady and focused as ever, there’s reason to suspect that this year’s midterms could be a win-or-go-home proposition for the 72-year-old California Democrat.

Obviously, if Democrats somehow pick up the 25 seats they need for a majority, Pelosi will stick around for two more years, at least, becoming the first Speaker since Sam Rayburn in the 1950s to lose the gavel in one election and win it back in the next. But the takeover odds she quoted on “This Week” are awfully optimistic.

Because of the size of the Republican wave in 2010, there are plenty of pick-up opportunities for Democrats on this year’s map, even the occasional gimme.  But redistricting has imperiled several Democratic incumbents, while a few others who represent heavily Republican districts have opted to retire.

The situation calls to mind 1996, the last time a Democratic president sought reelection. Then as now, the party was coming off a midterm debacle and sought to channel popular anger toward a poisonously unpopular Republican Congress into a majority-making wave. The magic number back then was 19, and Democrats ended up knocking off 18 Republican incumbents (13 of them freshmen); but when retirements and open seats (particularly in the South) eroded the net gain to nine seats, thereby denying Dick Gephardt a chance to be Speaker.

That ’96 result came even as Bill Clinton cruised to a second term, beating Bob Dole by eight points in a race that was never really in doubt. It’s still theoretically possible that a jolt of good economic news will lift Barack Obama to a similarly commanding victory this fall, but it’s far more likely that his race with Mitt Romney will be decided by a point or two either way – probably not big enough, in other words, to produce the kind of down-ballot tide Pelosi is counting on.

This is where the Pelosi retirement talk kicks in. The best tool that one party can have in trying to gain seats in the House is for the other party to control the White House. So if Democrats fall short in the House this fall but Obama is reelected (the scenario considered most likely for now), it will be hard for Pelosi – or anyone – to lead the party to a better result in 2014, when the playing field will probably be tilted in the opposition party’s favor. Only once since James Monroe’s presidency has the White House’s party gained congressional seats in a “six-year itch” election (the one exception: 1998, when the GOP’s unpopular drive to impeach Clinton produced a backlash). And 2016, which would then feature an open seat presidential race after eight years of Democratic rule, probably wouldn’t be conducive to significant Democratic gains either.

Under this scenario, Pelosi might well conclude that her window of opportunity to win back the top job in the House has closed and opt for retirement. If this were to happen, the change for House Democrats would be dramatic. Pelosi hasn’t just been their public face for more than a decade; she’s also been an unusually powerful and canny leader, filling key caucus posts with loyal allies who have subordinated their ambition to hers and identifying and isolating those she views as potential threats. This means that there’s no clear heir apparent if Pelosi goes, at least not yet.

The No. 2 post is currently occupied by Steny Hoyer, but age could be an issue with him (he’ll turn 73 in a few weeks). So could his status as Pelosi’s longtime rival and nemesis. Through nearly four years of fits and starts, she and Hoyer waged an epic battle that culminated in her 23-vote victory in a 2001 race for party whip. That set Pelosi up to succeed Gephardt as minority leader the next year and to become Speaker after the 2006 midterms. She’s never stopped looking over her shoulder, though, taking sometimes dramatic steps to hold Hoyer’s influence (and whatever ambition remains) in check. It’s hard to imagine her leaving without first ensuring that Hoyer doesn’t succeed her.

The next highest-ranking House Democrats, 71-year-old James Clyburn and 63-year-old John Larson, aren’t widely seen as party leader material either. Larson, in fact, owes his post entirely to Pelosi’s distrust of Hoyer; in a famous behind-the-scenes maneuver, she used him as a last-minute vehicle in 2006 to prevent a Hoyer ally, New York’s Joe Crowley, from winning the party’s No. 4 leadership post.

If she does hang it up, Pelosi will presumably seek to play a role in anointing her successor, but it’s not clear whom she’d have in mind. A wide-open leadership fight seems possible.

Not that it’s necessarily wise to begin thinking about life after Nancy. After all, in the run-up to the 2010 midterms, it was commonly assumed that she’d stand down as leader – and retire from Congress – if her party lost the House, like Republican Dennis Hastert did after the ’06 midterms. Pelosi had no interest in walking away, though, and maybe she still doesn’t. Or maybe Mitt Romney will end up winning this year, putting in place just the right formula for a House Democratic revival in 2014…