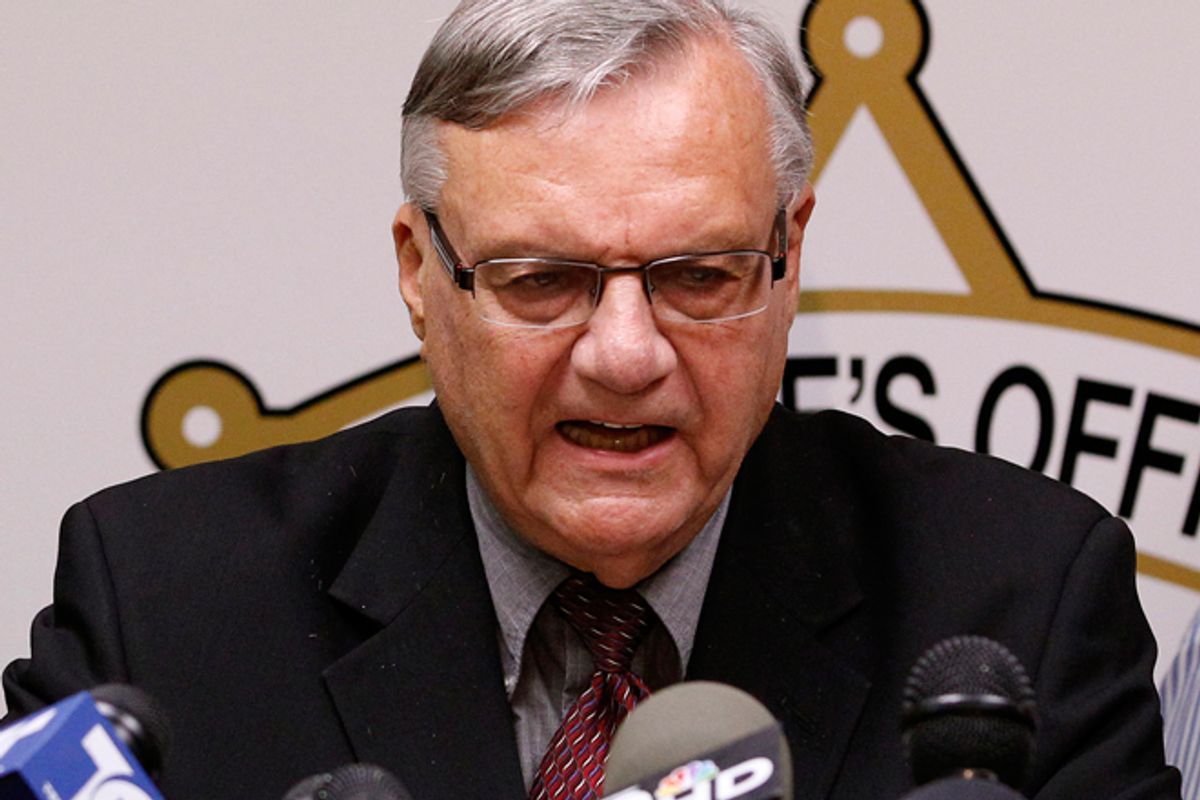 Joe Arpaio, sheriff of Maricopa County and living embodiment of everything vile and rotten in contemporary American society, has been hard at work investigating whether the president of the United States is an American citizen, which the president is, case closed. Or rather, case closed for people who don't make a living stoking racist paranoia. For Arpaio, the more evidence we have that Barack Obama's biography is precisely what he's always said it is, the stronger the likelihood that this conspiracy goes all the way to the top. So now he's got his agents traipsing around Hawaii, trying to stir up trouble.

TPM rounds up the news, from the Arizona Republic and the Honolulu Star-Advertiser: A deputy from Arpaio's "threats unit" and "posse" member Michael Zullo arrived at the Hawaii Department of Health Monday demanding proof of the existence of a document we've all now seen a thousand times. From the Star-Advertiser:

The two men showed Maricopa County Sheriff's Office badges and identified themselves as Michael Zullo and Brian Mackiewcz, Okubo said. They are "authorized by the Sheriff of Maricopa County, who is conducting an official investigation," a spokesman for the sheriff's office said in an email.

The Arizona Republic notes that in addition to having a taxpayer-funded deputy now assisting the supposedly donor-funded "cold-case posse" (which has spent $40,000 investigating Obama's birth certificate thus far), the citizens of Arizona foot the bill for airfare and lodging for the crack investigators. (Arpaio's response to questioning: ""It's one deputy, so what? We have security issues, too, that I can't go into.")

Zullo is the guy who, along with crackpot author Jerome Corsi, "proved" at a recent Arpaio press conference that the president's long-form birth certificate is a forgery, because of pixels. TPM also notes that the Maricopa County sheriff's office's "Threats Management Unit" was previously best known for smearing and intimidating one of Arpaio's electoral challengers.

I think we have long since passed the point at which I'd find this story believable in a fictional setting, so, sure, why not have two crack detectives flashing their worthless Maricopa County badges at the Hawaii Department of Health. (I just can't decide if they should be hard-bitten noir characters or Clouseau-esque bumblers.) But yes a completely crazy person who is in charge of law enforcement for the most populous county in Arizona is probably going to attempt to arrest Barack Obama at some point. I guess at least he's not directly involved with the Mitt Romney campaign, like Arizona Secretary of State Ken Bennett, Romney's Arizona campaign co-chair who's currently leading a separate investigation into proving the president's secret foreignness. (Though Arpaio was honorary campaign co-chair in 2008, when he was still a stalwart harasser of Hispanics, but before birtherism had been properly invented.)

Maybe Hawaii officials will throw the cold case posse in jail for, I dunno, criminal nuisance or something. That'd be fun.