The CPD has been congratulated for handling NATO protests. But what about reports of intimidation and entrapment? 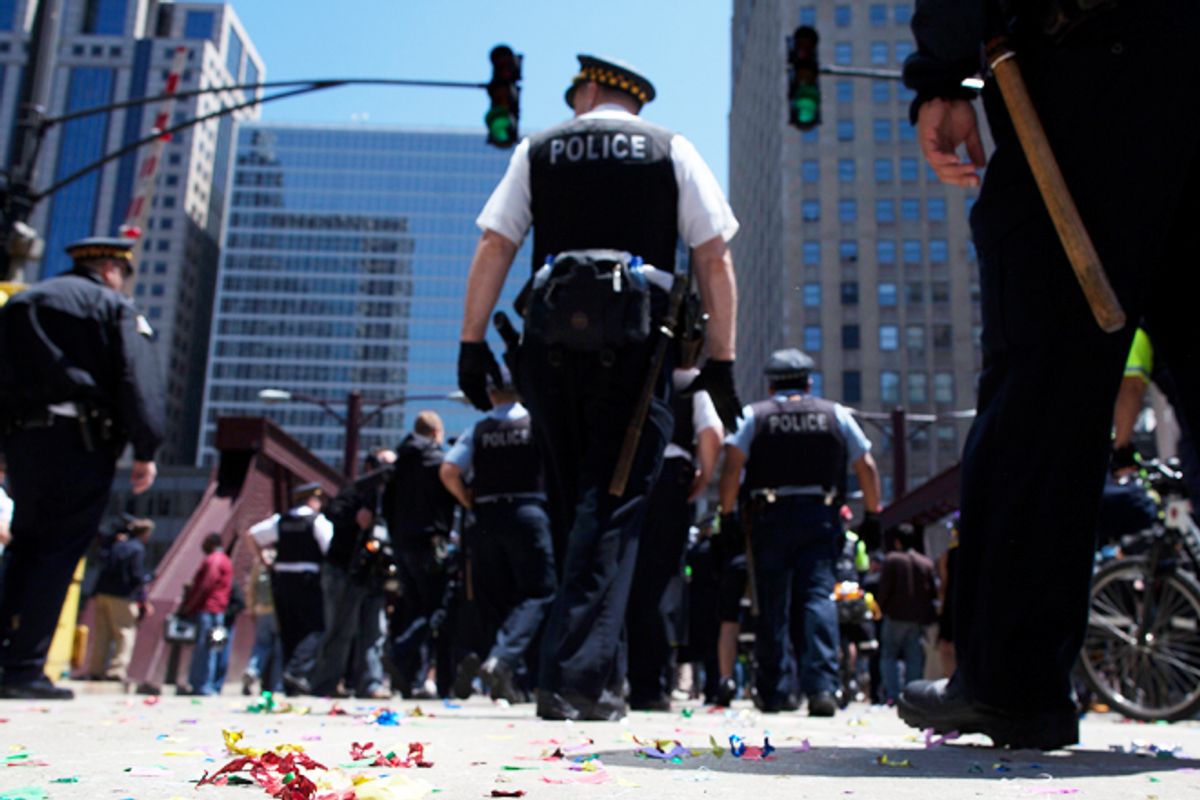 While thousands of NATO protesters streamed out of Chicago following Monday's final day of organized marches and rallies, the Chicago Tribune concluded that the summit had ended "without giving Chicago a black eye." And, indeed, although shocking images of heads bloodied by police batons have emerged, the city did not devolve into 1968-style unbridled chaos. This weekend's street scenes may not leave a lasting mark on the Windy City, but raids, police intimidation, protesters facing terrorism charges and reports of police entrapment leave a chilling imprint in the summit's wake.

I wrote here last week, following up on a Rolling Stone piece by Rick Perlstein, about the proliferation of FBI entrapment schemes aimed at activists and anarchists in the past decade. Following the arrest of five individuals in Chicago over the weekend who now face terrorism charges, the question of entrapment perpetrated by law enforcement seems more important than ever.

According to an exhaustive report from Firedoglake's Kevin Gosztola,"three Occupy activists raided on May 16 and disappeared for a period of time by Chicago police were brought before a bond judge [on Saturday] and officially charged with material support for terrorism, conspiracy to commit terrorism and possession of explosives or explosive or incendiary devices." The young men's lawyer, Michael Deutsch of the National Lawyers Guild, described the charges as "fabricated" and “based on police informants and provocateurs which is a common pattern that we have seen against people who are protesting.”

Deutsch has gone so far as to suggest that infiltrators from the Chicago Police Department actually planted materials for making Molotov cocktails in the apartment before the police raid and that his clients did not even take the bait. Meanwhile, rumors abound, including claims that elaborate weapons like throwing stars were retrieved from the raided apartment. Perhaps the most interesting tidbit of information fueling the rumor mill is whether the three suspects have been targeted because of a candid video they shot and released the previous week, showing CPD officers searching their car and intimidating them as they entered Chicago. The video, which gleaned considerable online attention, showed one officer recommending that protesters receive "a billy club to the fucking skull."

Meanwhile, two additional individuals were arrested and charged with planning to make explosives to use at the summit. The two reportedly stated that they possessed explosives that they intended to detonate, but no such devices were recovered when one of the arrestee's homes was searched, and the police did not perform a search on the home of the other. Nonetheless, he was arrested for discussing the ingredients for making a pipe bomb (presumably with a police informant, but this remains unclear).

Truthout's Steve Horn, who has been following the story closely on the ground in Chicago, noted that two undercover informants, working under the pseudonyms "Mo" and "Gloves," appear to be "thread" linking the five activists now facing terror charges. Details of the cases continue to emerge, but Perlstein's Rolling Stone article last week is reminder enough that accusing authorities of entrapment is unlikely to work in the defendants' favor, even if evidence is on their side. "Not a single 'terrorism' indictment has been thrown out for entrapment since 9/11," he noted.

And while the facts surrounding the five arrestees remain murky, the furor surrounding the raids, arrests and charges in the past week are enough to illustrate the immediate impact of alleging terrorist threats during mass activist mobilizations. Twitter was abuzz with unsubstantiated, nervous rumors about pending police raids and lurking, unmarked vans. And once again, the terms "anarchist" and "Occupy" have been linked to terrorism in the media and public consciousness. Even if, as the NLG argues, the charges are "fabricated," the suggestion of terrorism stokes fear and upholds the good protester/bad protester narrative that has long haunted Occupy groups nationwide.

So while the Tribune may be right, that the NATO summit and surrounding protests did not leave a "black eye" on the city, even the worst bruises heal fast. Something more damaging may, however, remain: the ongoing persecution of anarchists and activists with entrapment, intimidation and trumped-up charges.