The student strike in Quebec has generalized, and solidarity is spreading in the U.S. 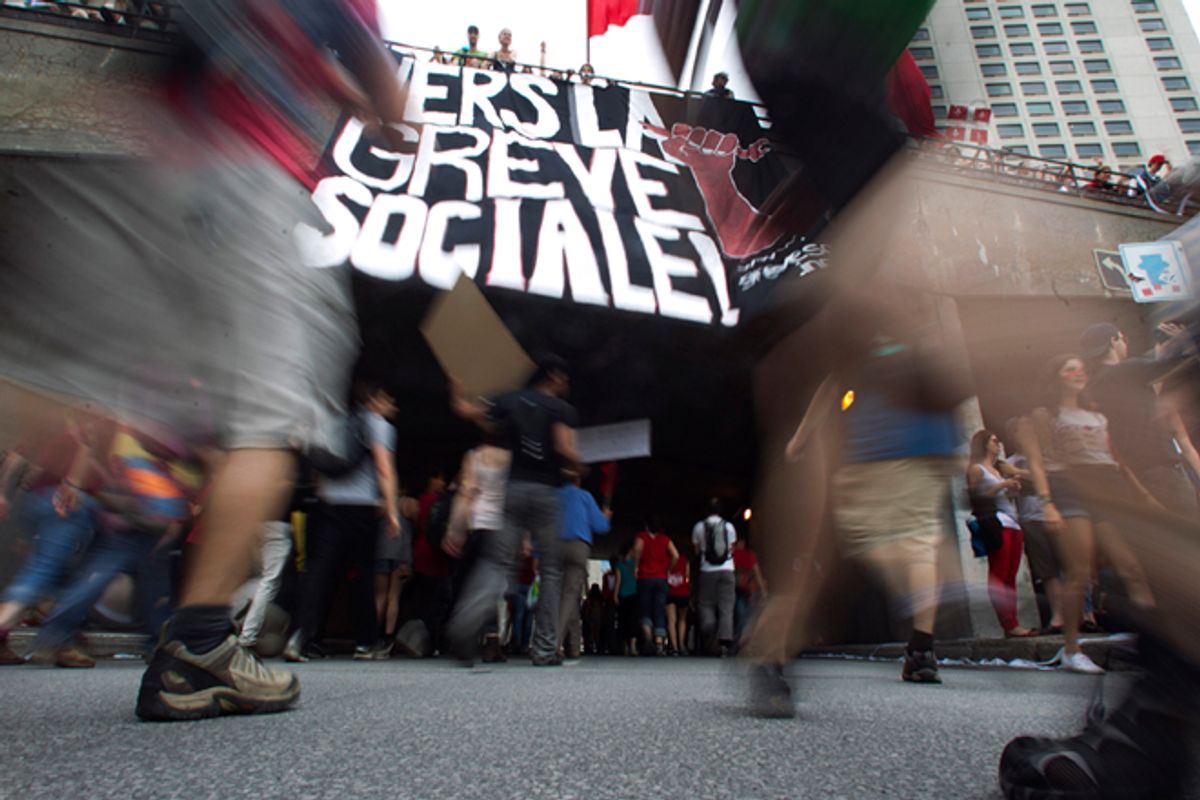 For the past eight months, when chants of "Anti-Capitalista!" have echoed through New York streets, they've tended to emanate from crowds with a penchant for black clothing. But on Tuesday night, when once again a march of around 300 snaked through the streets around Washington Square Park, the color scheme was different: red flags, red banners, red clothes, red masks and little red felt square pins adorned the marchers -- a mixture of long-term Occupy participants, students and others taking the streets and donning some red in solidarity with the Quebec student strike.

Reminiscent of ad hoc Occupy actions last fall, the march in Manhattan blocked streets and confused police attempting erratic, aggressive arrests. It was, however, just a small nod to the action taking place in Montreal. There, up to 500,000 people took to the streets on Tuesday in what's being called the largest act of civil disobedience in Canadian history, marking the 100th day of a powerful student strike.

The situation in Quebec has escalated since February from a student strike over planned tuition hikes -- effectively shutting down universities -- to a state of generalized insubordination and anger at a government adopting draconian measures to stifle dissent. A year and a half ago, the Quebec government decided to raise university tuition fees -- currently the lowest in Canada -- by 75 percent over a five-year period (a plan that, despite negotiation efforts by student unions, was revised to an 82 percent rise over seven years). In response, thousands of students and faculty members went on strike and struck a blow to the province beyond the university gates, taking to the streets and building numbers.

"I don't think many people, including the [Quebec] government, anticipated that this would escalate and continue everyday since March 22," Danna Vajda, 29, a former student of Concordia University Montreal, who attended the New York solidarity march, told me via email. She noted: "By the time the government was willing to negotiate with appropriate student associations, earlier this month, the position of many students had already fermented into something much more committed to achieving the goals of the strike than getting back to business as usual and finishing the semester, and the deal offered by the government was rejected by over 80 percent of the student associations." Vajda added too that the strike is widening its nets, with students in neighboring Ontario considering striking in the fall semester and numerous unions in Quebec potentially joining "what is now becoming an 'unlimited general strike.'"

In a move indicative of a leadership grasping for control, the provincial government passed Law 78 in mid-May. Attempting to end the strikes and force the reopening of the universities, the law in no uncertain terms makes protest illegal. Groups planning demonstrations with more than 50 expected participants, according to Law 78, must inform the police in writing at least eight hours in advance of the protest with details of time, location, size and duration. More perturbing still, expressing support for demonstrations and strikes deemed unpermitted under Law 78 renders one guilty of that offense and liable to face the same steep fines. Québécoise have been targeted, tear-gassed and arrested by police for the mere act of wearing the red-felt square on their clothes (the symbol of solidarity with the strike). But on Tuesday, the response to Law 78 in the streets of Quebec was unequivocal: a 500,000-strong middle finger.

What the Quebec uprising means this side of the border is yet to be seen. As was the case with the Arab Spring and mobilizations in public squares and streets in Greece and Spain, how actions in Canada might shape or inspire actions in the U.S. becomes a question of resonance. And the grounds for resonance here are strong: relative to U.S. education costs, the proposed tuition hikes in Canada seem almost negligible. The red square of the student strike -- symbolic of "being in the red" because of student debt -- might resonate more profoundly with students in the U.S. than anywhere else worldwide. Aside from Occupy efforts to build student debt strike campaigns, the student occupations at the University of California in 2009 over tuition hikes laid much of the ground from which Occupy emerged.

Writing on AlterNet last week, two student activists from the City University New York argued that the lesson to import from Quebec lies in the importance of institutionalizing student power: "We believe that if students in the United States hope to have the kind of impact on our universities that we witnessed in Montreal, we will need to first establish radical, federated student unions here at home, organizations capable of replacing our currently weak systems of student participation." For many student organizers, this will be the take-away from Quebec.

I want to urge a different lesson entirely. Vajda noted, "Many students did not think at the outset that they would be sacrificing the semester worth of work, tuition, fees, but I think increasingly it is becoming clear that the stakes are high and those sacrifices can create leverage to work toward shaping a different future that will not follow the neoliberal model of debt-fueled education." Crucially, the increasingly radical strike has been -- and continues to be --  a daring experiment for those involved, far surpassing the assumed remit of the original student walkout. The conviction and strength of the strike, according to Vajda, grows every day as people continue to meet and act in the streets. Law 78 only served to galvanize and generalize this experimental dissent.

The powerful message from Quebec, for me, is not the importance of strong student leadership. Rather, it is that thousands of individuals have taken risks, broken with their daily routines and found each other in the streets (despite numerous social and political divisions) to engage in a radical political experiment with no clear endpoint. One of the main Twitter hashtags relating the Quebec actions is #manifencours, an abbreviation of "manifestation en cours, meaning simply "demonstration in the streets." As the proliferation of the phrase suggests, the situation in Quebec is no longer just about negotiating tuition fees; it's a manifestation with an open trajectory.

Occupy for many months was a radical experiment in challenging business-as-usual and reclaiming space as public. And at times it too was emboldened by police repression. Although police response may not have been codified into a measure like Law 78, the crackdowns on Occupy encampments and actions -- even legal, subdued demonstrations on sidewalks -- made clear that dissent in this country would be treated as illegal. But the lack of something as concrete as Law 78 here is important: The attempts to control protest have thus been more insidious, although no less brutal, coordinated and consistent. If people in this country look to Canada and see the defiance of Law 78 as strong grounds for hitting the streets, they too should see those grounds in the various crackdowns and in the persecution of Occupy participants and anarchists. It goes without saying that if there are grounds for radical student action anywhere, they are in the U.S. We -- students and non-students alike -- are "in the red" as much as and more than our neighbors to the North; and we, like them, should be in the streets.