In Chicago, the defense industry's grip on NATO was tighter than ever. Make way for missile defense 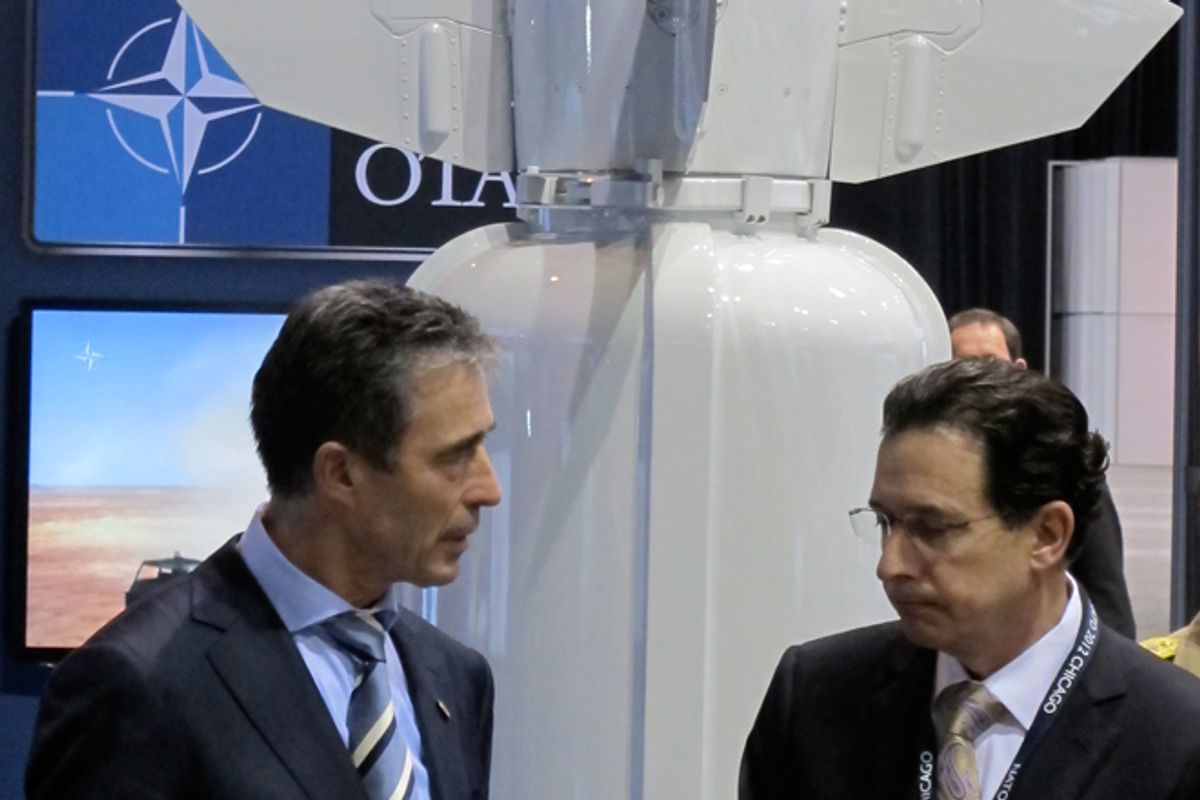 He was right to panic. It was Sunday evening, 6 sharp, the end of the first day of the NATO summit in Chicago. A swarm of global press was gathered around the convention hall’s lone display, a slick industry-sponsored video exhibit of NATO’s ballistic missile defense system. Any minute, NATO Secretary-General Anders Fogh Rasmussen and his entourage would come sweeping out of a nearby tunnel for a tour the installation. It was the last photo op of the day.

There was just one problem. The televisions lining Rasmussen’s entrance path were turned to CNN and looping fresh footage of Chicago police raining nightsticks down on the skulls of protesters. The waiting press was glued to the screens, pointing and murmuring about the violence in a dozen languages. Also drawing attention was a very public huddle by NATO staff. “Shut off the damn TVs!” one of them said. “The optics might be worse if we shut them off now,” said another. But it was too late. Before a decision on the TVs could be reached, Rassmussen entered the hall trailed by a gaggle of attaches and military men. The world’s cameras snapped away.

It reveals much about NATO and the media coverage of the Chicago summit that images of protest are “bad optics,” but not what came next. What came next was this: Rasmussen received a guided tour of the missile defense exhibit not by senior NATO military officials, nor by the scientists developing the technology, but by senior executives from Raytheon and Thales, two of the program’s leading private contractors. Under the gaze of the world’s media, the three men strolled through the bright illuminated walls surrounding a life-size interceptor missile. Each was titled for aspects of the system — “Potential Future Capabilities,” “Interceptor Systems,” “Land and Sea-based Sensors” — and contained photos of the technologies in action. Below each photo was the logo of the company holding the contract. Raytheon and Lockheed were most common, followed by Boeing and the French firms MBDA, Thales and Astrium.

“If you are looking for a case study on defense industrial interests shaping NATO policy, missile defense is a good place to start,” says Ian Davis, the London-based director of NATO Watch and the organizer of a recent NATO shadow summit in Washington, D.C.

Standing not far from me and watching with pride was Linda Stanfel of Sterling Strategies, a boutique public relations agency contracted by the Pentagon’s Missile Defense Agency to promote missile defense. Stanfel was very proud of the installation, which she had put together with contributions from the system’s contractors. While waiting for Rasmussen’s arrival, I overheard her chatting with Raytheon vice president for business development Thomas Vecchiolla. “Back in the 1980s [the Pentagon] used to spend all this money on disaster management, correcting everything the press got wrong about missile defense,” she said. “This is the kind of thing we need to be doing more of.” She was upset that Northrop Grumman had declined to contribute to the installation. “They’re the only ones who don’t seem to get it,” she said with a frown. But the joke was on anyone but Northrop Grumman, who left Chicago with a $1.7 billion deal to lead the 13-nation team producing a new Alliance Ground Surveillance System.

As Rasmussen enjoyed his tour of the missile defense exhibit, I looked around to see if anyone else thought the sight strange. It was the kind of thing you expect to see at some arms show on the Arabian Peninsula, not in the middle of the press center at NATO’s Chicago summit. But here it was, and nobody seemed to think anything amiss about the leader of the Western Alliance nodding solemnly as Raytheon’s lead salesman explained features of this hugely expensive and controversial program the way a Mercedes dealer might tout extras in the latest S class.

There are, of course, a few major differences between a Mercedes and NATO’s new luxury purchase. The lease on missile defense has no end. Its sticker price likely runs high into the tens of billions of dollars. And it risks undermining the organization’s stated mission of strengthening peace and security in Europe. How did NATO come to embrace this scheme explained so publicly by industry to its secretary general in Chicago? Is it possible the pressures that led to this decision, one of the most momentous developments in the history of the alliance, resembled the pressures driving the missile defense program in the U.S.? Because there is so little scrutiny of NATO’s role in the global arms industry, it’s not exactly clear. But like everything NATO does, the decision to move ahead with missile defense has industry’s fingerprints all over it.

For years, Ian Davis has been among the very few critical observers of the NATO process leading up to its recent embrace of ballistic missile defense. He has been a quiet anti-groupie on the industry-sponsored missile defense conference tour, often paying registration fees of more than $1,000 to attend events that seem designed to deflect public scrutiny. “At meetings held by the missile defense cult, the PowerPoint presentations are usually from all the main beneficiaries of U.S. taxpayers’ largess: Lockheed Martin, Boeing, Raytheon and Northrop Grumman,” says Davis, who has been trying without success to get NATO to release its feasibility study on missile defense. Last year, NATO contracted out the $3.4 million, thousand-page study to Science Applications International Corp., an international consortium of industries that include many top missile defense contractors.

“If this occurred in a ‘banana republic’ there would have been a considerable outcry with external pressure for ‘good governance’ reforms, but in the NATO democracies this sad state of affairs doesn’t even raise eyebrows,” says Davis.

The U.S. defense industry is a driving force behind both the U.S. and NATO missile defense plans (which is essentially an extension of the U.S. system). The industry comes together in the form of the National Defense Industry Association, which is something like the American Legislative Exchange Council of the defense sector. In bringing together military and politicians in an endless calendar of industry-hosted luncheons and meetings, the organization has good business sense and an awful grasp of history. In a ceremony next week, the group will award chairman of the House Armed Forces Committee “Buck” McKeon its annual Dwight D. Eisenhower Award, named after the man who famously left office with a warning to the American people about what he termed “the military-industrial complex.”

NDIA extends its influence inside NATO through its seat on the board of the NATO Industrial Advisory Group. Formed in 1968 as a high-level advisory group of senior industrialists, NIAG appears to understand that growing pressures on Allied military budgets increases the importance of missile defense. In April 2010, the group elected as its chairman Wayne Fujito, an executive with Decisive Analytics and former vice chairman of the NDIA’s international division. Fujito’s military and corporate expertise? Air defense and ballistic missile defense R&D. He ended his government career as chief of staff of the U.S. Army Space and Missile Defense Command, and his firm contracts with the Missile Defense Agency in Huntsville, Ala. Under Fujito’s leadership, NIAG has initiated two major studies for NATO on missile defense  and cybersecurity. The reports should be ready just in time for NATO Industry Day festivities this October in Riga.

In the run-up to Chicago, Fujito expressed hope that a special NIAG position would be created within the NATO bureaucracy. “I understand that the NATO Secretary General will recommend the appointment of a special envoy to hear the voices of industry,” Fujito told Defense Weekly. “That is a good thing.”

Uncertain defense budgets help fill in the context of industry’s push to expand missile defense under the NATO umbrella. In 2012, it is a lonely major transatlantic project on the defense-spending horizon. The new issue of NDIA’s magazine National Defense features an article lamenting the diminishing prospects of “shiny objects” in Allied budgets. “Some contractors might decide to wait for the good times to return,” editorializes the magazine, “but most others are going to be following the money to what is increasingly becoming industry’s more reliable cash cows: Maintenance, repairs and logistics support.”

The “cash cow” of maintenance may help pass the lean times, but it doesn’t launch research labs and production lines that can stay active indefinitely as can a sophisticated and essentially open-ended missile defense system. To quote an old and appropriate Dead Kennedys song, a growing boy needs his lunch, and missile defense is among the few all-you-can-eats in town.

With NATO missile defense, it is the U.S. taxpayer picking up the tab. “A significant European role in financing [NATO missile defense] is unlikely in present circumstances,” says Ian Anthony, research coordinator for nuclear weapons and arms control at the Stockholm International Peace Research Institute. “I doubt if European countries could find the domestic political support for funding it.”

Give Americans enough information to meaningfully consider the question, and the American countries also have trouble finding domestic political support for multi-billion-dollar black hole programs like missile defense. Just days before the start of NATO’s summit, the Program for Public Consultation released the results of a poll that asked Americans about proposed cuts to the Defense budget. Majorities supported the cuts and went further. Majorities favored scrapping Pentagon boondoggles like the F-35. As for missile defense, 64 percent of respondents (including 55 percent of Republicans) supported the following argument:

After 28 years of research and spending $150 billion, national missile defense systems have largely failed to work, even in tests conducted in ideal conditions. And even if we succeeded with missile defense, it is not relevant to the most likely nuclear threats today.

Defense Weekly noted the results with a simple and comforting thought. “The Pentagon and defense industry should be thankful,” wrote the magazine, “that politicians don’t make military-spending decisions based on public opinion.”