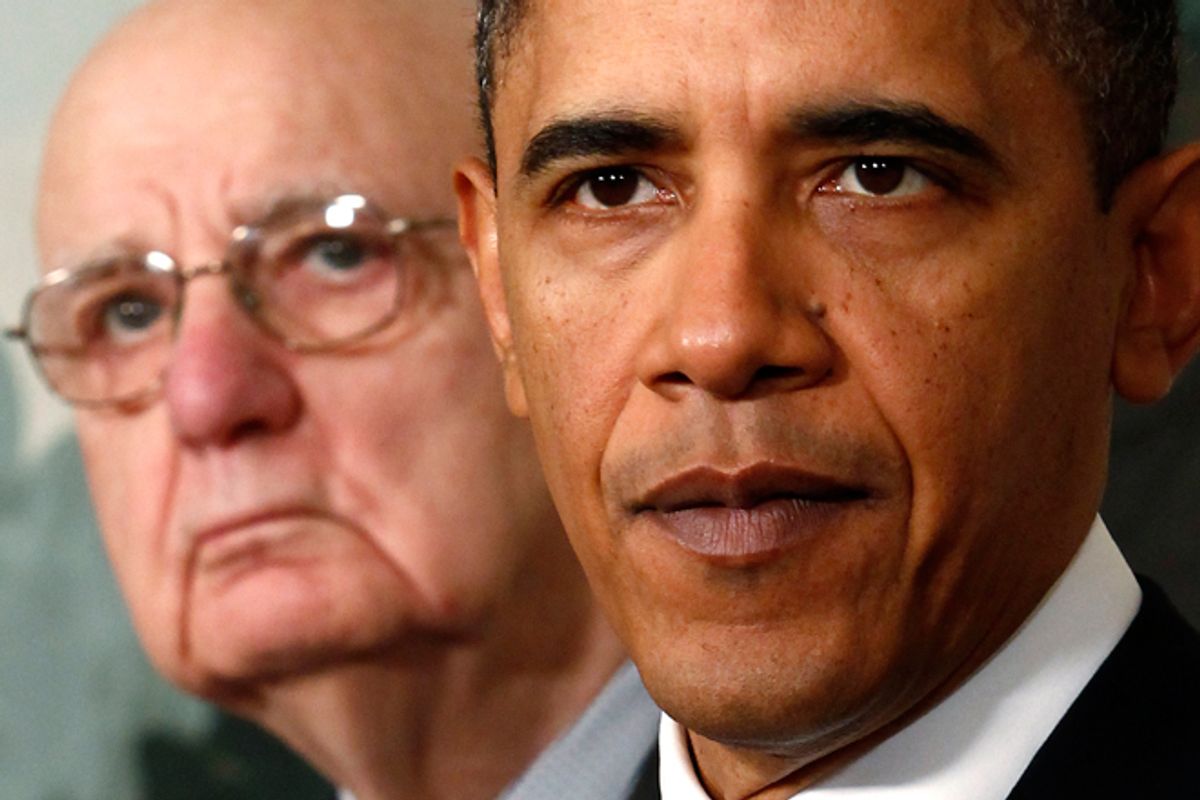 Jamie Dimon's Wall Street peers have good reason to be annoyed with him. Over the past several years, the financial sector spent hundreds of millions of dollars lobbying to weaken bank reform. Then came JPMorgan's multiple-billion-dollar-losing credit default swap blunder. And suddenly, Washington hit the pause button on regulatory rollback. All it took was one reminder of how stupid even the best-run banks can be for everyone to recall that trusting these jokers to act responsibly is a losing game, and, wham, bank regulation was back in the news. Efforts to repeal various parts of the Dodd-Frank bank reform act halted, but more important, pundits and politicians are focusing a brand-new round of attention on the ongoing process of writing the "Volcker rule" into law.

The Volcker rule is supposed to prohibit  banks from making speculative bets with their own money on such a scale that they can endanger both the financial viability of the financial institution and the larger economy. The basic principle is simple: Government can't allow banks of the size of JPMorgan to fail because the consequences for the general economy would be too disastrous -- and that gives government the right to shackle the irresponsible tendencies of those banks. Unfortunately, the above-mentioned lobbying campaign had weakened the rule-writing process to the point where JPMorgan's bet would probably have been permissible even after the Volcker rule came into effect.

As of last week, there's suddenly a pretty widespread consensus among people not employed on or bankrolled by Wall Street that we need to tighten up the Volcker rule. But according to a report by Talking Points Memo's Brian Beutler, this has put the Obama administration in a sticky situation:

The administration hasn’t specified any particular steps it would like regulators to take to shore up the so-called Volcker Rule — a bid perhaps to avoid an ugly public fight with powerful interests in an election year. But inaction — or a too-tepid response to JP Morgan’s losses — will hurt President Obama with key allies, who want to use the debacle to further rein in Wall Street.

Say what? Why on earth would the Obama administration want to "avoid an ugly public fight with powerful interests in an election year"? Shouldn't the opposite be true? Shouldn't the Obama administration be going out of its way to pick a fight with Wall Street? Could there be any better opportunity to tap enduring popular anger at the financial sector and draw a clear line demarcating Obama from his challenger, Mitt Romney?

On Saturday, in Obama's weekly radio address, the president delivered a restrained call to action:

That’s why it’s so important that Members of Congress stand on the side of reform, not against it; because we can’t afford to go back to an era of weak regulation and little oversight; where excessive risk-taking on Wall Street and a lack of basic oversight in Washington nearly destroyed our economy ... We’ve got to finish the job of implementing this reform and putting these rules in place.

But that's nowhere near enough. President Obama needs to go back and remind himself how a previous crusader for financial sector regulation made his case when running for his second term as president. Just a few days before Election Day in 1936, Franklin Roosevelt appeared at a rally in Madison Square Garden and delivered a passionate tirade that still jumps right off the page (and YouTube).

Never before in all our history have these forces been so united against one candidate as they stand today. They are unanimous in their hate for me — and I welcome their hatred.

That's how you run for reelection, Mr. President, when the "moneyed interests" are backing your opponent. You don't shy away from an "ugly" fight. You embrace it.