Dog bites man, the sun rises, and Coulter and AEI flack dissemble about Obama vs. Bush and Reagan budgets 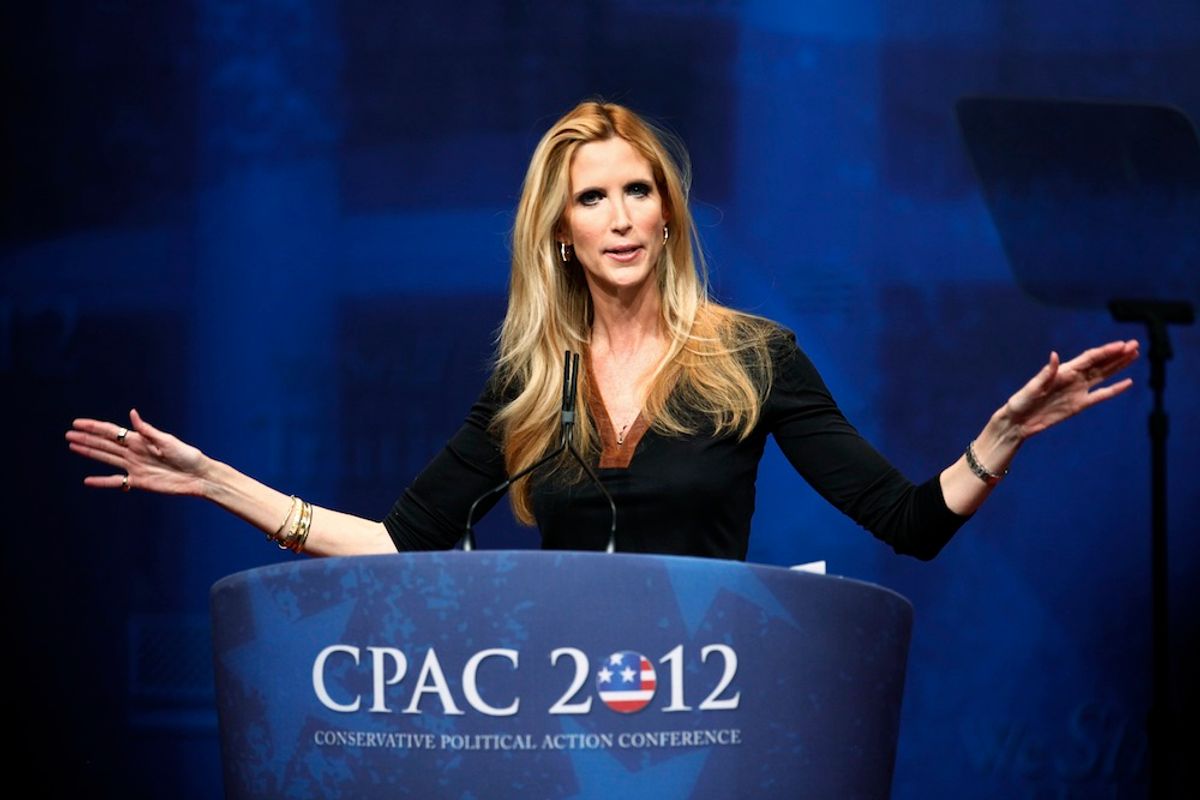 I was late to the excellent MarketWatch story debunking the notion that President Obama's been on a spending binge; I spent most of Tuesday traveling. But after my "Hardball" segment on it Wednesday, Ann Coulter tweeted: "Joan Walsh says that Marketwatch chart is 'unbelievable'! Why yes it is, in the sense of being untrue." That's when I saw that there was shrill but lame GOP pushback on Rex Nutting's excellent story, from both Coulter and the American Enterprise Institute's James Pethokoukis. I don't normally reply to Coulter's right-wing delusions -- I haven't written a column about her in five years -- but since I think Nutting's findings are a crucial corrective to GOP lying, I wasted my Wednesday night trying to understand the GOP attempt to discredit him. You're welcome.

Coulter admits she relies on Pethokoukis, so let's go directly to the source. To recap, Nutting crunched Office of Management and Budget and Congressional Budget Office numbers to find that under Obama, spending has risen at an annualized rate of 1.4 percent, less than any president since Dwight Eisenhower. It jumped 8.1 percent in the last three years of the George W. Bush presidency, and in fiscal year 2009, for which Bush approved the budget, it jumped 17.9 percent. But Bush isn't the most profligate Republican: Ronald Reagan increased spending an average of 8.7 percent in his first term.

Pethokoukis quarrels with Nutting's assigning Bush's budget to Bush, because "Obama chose not to reverse that elevated level of spending; thus he, along with congressional Democrats, are responsible for it." Exactly how one president undoes the spending approved by another president under a different Congress goes unexplained. The AEI pundit also argues that we should look at federal spending as a percent of GDP, and he notes that's gone up under Obama, attempting to prove that Nutting is mistaken – but that's a useless metric during a recession, which by definition shrinks GDP.

Coulter goes even further (of course). "It turns out Rex Nutting, author of the phony Marketwatch chart, attributes all spending during Obama's entire first year, up to Oct. 1, to President Bush." (The italics are in the original; they're where the good writing is supposed to be.) She continues: "That means, for example, the $825 billion stimulus bill, proposed, lobbied for, signed and spent by Obama, goes in ... Bush's column."

Shockingly, Coulter is … wrong. First of all, only about $120 billion of the stimulus was spent in fiscal year 2009 – and Nutting counted it in Obama's column. He also included new funds appropriated under Obama and the Democratic congressional majority for the child health insurance program and other projects. And it says so quite clearly on the nifty chart Coulter finds fault with: $140 billion spent in the 2009 budget year is plainly attributed to Obama. It also says so in the text of the story, for people who don't read charts.

"I attributed all the new spending I could find to Obama," Nutting told me in an email. "I looked at the CBO's budget outlook from Jan. 2009, and spending for '09 was actually lower than CBO projected. And spending has been flat since then."

Coulter also claims that Nutting's piece has been ignored by the New York Times, but in fact David Firestone weighed in today, and made a point I should have made: It's actually sad that a Democratic president is kvelling about cutting the rate of federal spending growth to its lowest level since Dwight Eisenhower (actually, I made that point last August). Firestone notes that various budget deals aim to cut discretionary spending by $800 billion over a decade, by trimming education, food, housing, transportation and job training programs. "This category of spending, which used to be 5 percent of the gross domestic product in Nixon’s days, is heading down to less than 2 percent," Firestone notes. Pethokoukis and Coulter ought to be applauding.

I've hailed Nutting's piece not because I'm happy that Obama has presided over such stingy budgets (largely forced to by congressional Republicans), but because I'm glad to see a reporter telling the truth. If Pethokoukis and Coulter are the best the GOP can do to tear his work down, maybe more reporters will join him.