"Battlefield Earth": Romney vs. the Psychlos

The GOP's standard bearer calls L. Ron Hubbard's bizarro sci-fi epic his favorite novel. Is that cause for concern? 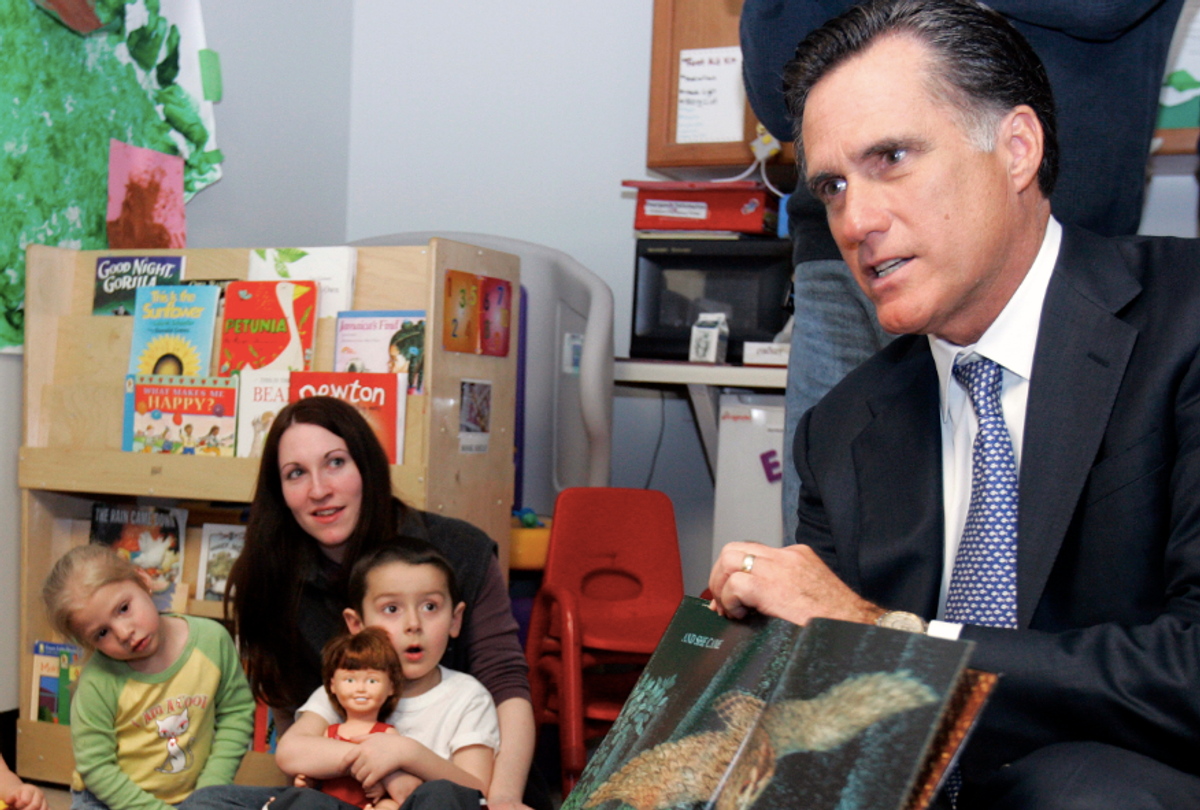 There’s a scene near the end of "Battlefield Earth," Scientology founder L. Ron Hubbard’s 1982 science fiction epic, that may explain a bit of why Mitt Romney has said (most recently this week) that it’s his favorite novel.

Our hero, Jonnie Goodboy Tyler, has just finished taking down the Psychlo empire, which has ruled Earth for the past millennium and has dominated most of the known 16 universes for going on 300,000 years. Now Jonnie has to negotiate with the alien powers who are jockeying to fill the power vacuum left behind, and things aren’t looking so good for the human race.

Homo sapiens seem destined to suffer one of the more common fates of common folk after the end of totalitarian rule — war, chaos and brutal, if less total, exploitation at the hands of tyrants, oligarchs, warlords and military juntas.

Into this dire situation steps Jonnie, who proves that his genius isn’t just for armed insurrection but for diplomacy and great power politics as well. He outwits his enemies at the conference table, finds a way to settle the 60 trillion galactic credit debt that Earth discovers it owes to the Galactic Bank and threatens the assembled dignitaries and thugs into signing a treaty forbidding war forever. Then to top it all off, he draws on his recently acquired knowledge of ancient Earth economic theory to persuade them that their interests would be best served not by reaping wealth through war, as they’ve been accustomed to doing, but by introducing free market capitalism, and commercial banking, to the universes.

“There are other ways of handling economies,” Jonnie explains. “You could phase every war industry you have over to what is called ‘consumer production.’ You make things for the people. The people are employed. They make things for one another. Your people are your best market for your industries. … Your people, now starving and rioting, can become gainfully employed in peace industries. They can have things for themselves. Such things as better houses and furniture, better clothes, better food.”

It does not require an esoteric reading of Hubbard’s text, in other words, to identify conservative notions of the kind Romney seems to hold. It’s full of explicit commentary about the stupidity of taxes and the dangers of an overly intrusive state. The Earth government that Jonnie helps set up after the dust settles is a kind of paternalistic libertarian utopia, in which no one pays any taxes except what they volunteer as donations; the rest of the expenses are quietly covered from Jonnie’s personal account. There’s even an offhand insult of “some nut named Keynes,” whose bad theories Jonnie encounters while cramming for his meeting with the Galactic Bank.

Earth’s foreign policy, once the Psychlos are gone, is like a neoconservative fantasy of what the Forces of Freedom and Light could do if we had a Death Star and were willing to use it. Jonnie coerces the signatures on his pan-universal peace treaty by showing his rivals a holographic recording of the nuking and subsequent implosion of the Psychlo planet. He then calmly explains to them that he’ll do the same to their planets if they don’t comply. They sign, and freedom rolls forth.

Even for 1982, when the novel was published, it reads a bit retrograde in its earnest celebration of white guys kicking ass. There are almost no women, and the few who show up are virginally pure. There’s a sentimental ethnotyping of the various surviving human populations (Chinese people are good at cooking and understanding the rules of courtly etiquette; Scottish men all sound like Montgomery Scott and dress like highlanders). And the white guys are total Übermenschen. Jonnie himself was “a muscular six feet shining with the bronzed health of his 20 years,” with “corn yellow hair and beard,” and “ice-blue eyes.” It was as if Hubbard hadn’t gotten the memo that it wasn’t the 1940s anymore, when he and his buddy Robert Heinlein had helped work out the formula for this kind of high adolescent science fictional adventure tale.

But for all that, my guess — and I can only guess at this — is that it misses the point to assume that Romney likes the book for these reasons. I suspect he’s drawn to it more for the reasons I was.

I first read the novel when I was 12 or 13. I didn’t quote the above passages from memory, but you’ll have to trust me when I say that I knew exactly where to find them in the text when I booted it up on my iPad. "Battlefield Earth" is a ridiculous book, every bit the gargantuan exercise in nerd-boy wish fulfillment you’d expect from someone like Hubbard, who was such a nerd-boy bent on wish fulfillment that he invented a religion to fulfill his dreams of mastery and immortality.

But "Battlefield Earth" is also an incredibly exciting book, pulp of the pulpiest order. It’s the kind of adventure story that exerts a particularly strong pull, I’d wager, on boys of a certain age with a certain need to escape into, or project themselves into, heroic tales of conquest, mastery and moral clarity.

For me it was, I half-realized as a teenager and fully realize now, consolation. It was comfort food, compensation for my feelings of insecurity, inadequacy, anxiety.

I don’t think I read the whole, 1,000-plus-page thing through more than twice, but I read my favorite set pieces dozens of times. I read it late at night, when I should have been getting sleep for school. I read it, at times almost hungrily, when I was home on vacation from college. I read it to feel better, to feel nothing, to escape.

That’s not to say that there was nothing political about my attraction to the book, and to the hundreds of other such books I read. But the politics of it went deeper, into the muck of those psychological processes by which we process, deny or sublimate the data of the world, our fears, our fantasies. I wanted to save the world. I wanted to be strong. I wanted to vanquish enemies. I wanted good and evil to be clear. I wanted to run away. I wanted to escape the anxieties of my family, of school, of sexual desires that I had no real means of satisfying. A lot of the time I just wanted to disappear into the time-displacing comfort of a well-plotted adventure.

At a minimum Mitt Romney was 36 or 37 when he first read the book. I’m now 36, and though I haven’t read "Battlefield Earth" in a while, I’m not clean. I still read science fiction and fantasy, and though I’m wiser and more sophisticated than I was as an adolescent, when they exerted their strongest pull, that hasn’t meant discarding those parts of me that were formed by the books.

It hasn’t meant rejecting the books. It’s meant reckoning with the influence they’ve had on me, and with those parts of me that sought them out. It’s not wrong to want to save the world, be a hero, fight for the cause of justice, live a purposeful life. But it’s unserious to believe that these things are easy, that they can be achieved without sacrifice or compromise, that being heroic in one’s own life is going to look anything like what it looks like for Jonnie Goodboy Tyler. And it can be horribly toxic to continue as an adult to view the world through an unreconstructed Hubbardian lens. Women, I’ve learned, actually do exist. Death Star foreign policy is problematic in a number of ways. It’s not bogus left-wing literary theory to notice that aliens, in books like "Battlefield Earth," are often proxies for the kinds of dark-skinned humans that we palefaces have historically had a hard time seeing as human. Problems like war, poverty, oppression and exploitation don’t just melt away when you set loose patriotic, super-resourceful, can-do capitalist-engineer-ninjas to do their thing.

The key question about Romney and "Battlefield Earth" — or Anne McCaffrey’s "Dragon Flight," or Orson Scott Card’s "Ender’s Game," two other old favorites of mine that Romney’s mentioned liking — isn’t: What does it mean that he likes the book so much? I like the book. I wouldn’t be shocked to find out that Barack Obama likes the book, or Karl Rove, or David Petraeus (all of whom have at least a glint of the nerd-boy about them). The question is what has Romney done with it? How has he reckoned with it?

What was going through his mind, back in the 1980s, when he came home at night after a long day of leveraged buyouts, when the kids were all in bed and he and his wife, Ann, lay side by side in their bed, she with her "Anna Karenina" and he with his "Battlefield Earth"? Did he see himself as heroic like Jonnie Goodboy Tyler? Was he saving companies from the Forces of Bad Management and Government Intrusion? Was he reading, instead, as an escape from the moral compromises of the work he was doing at Bain Consulting, which, however you slice it macroeconomically, didn’t meet the standards of moral purity that would have satisfied Jonnie Goodboy Tyler?

What does he think about the politics (explicit and implicit) of "Battlefield Earth" now that he’s running for president, and may soon end up in a position where he has to decide how to handle the Psychlos at home and abroad?

It seems unlikely that Romney’s going to engage these questions, and in the absence of such answers it’s inappropriate to go too far in analyzing him by way of the book. But it’s worth saying this: "Battlefield Earth" is in most respects a silly story, but for a lot of us it’s just such silly stories that have made us who we are. If Romney is elected president, he will wield enormous power over the people of Earth, and I have a feeling that somewhere in that psyche of his there’s the voice of Jonnie Goodboy Tyler, and L. Ron Hubbard, saying something about how to be righteous in the world. I hope for our sake, and for the sake of galactic peace and prosperity, that Romney has enough wisdom to take from those voices what’s good in them, and to keep the rest in proper perspective.

Daniel Oppenheimer's book "Turncoats: The Journey from Left to Right and How It’s Transformed America," a political and intellectual history of six prominent American intellectuals who journeyed from the left to the right of the political spectrum, will be published by Simon and Schuster