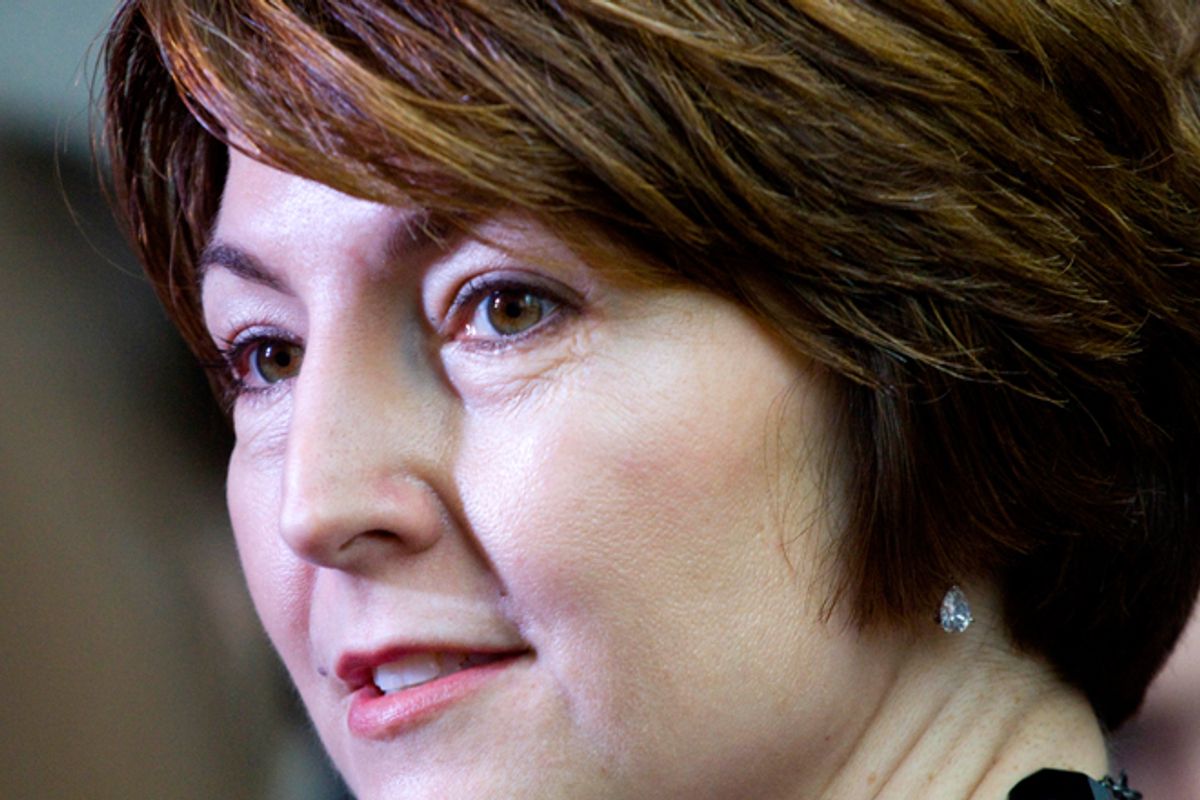 In March, a few weeks after the photo of an all-male hearing on contraception went viral, a USA Today story pointed out that on the most recent "Meet the Press" discussing that same policy change, Debbie Wasserman Schultz argued the Democrats’ case, while “the Republican counterpoint was given by a man” – Eric Cantor. The GOP, according to the headline, was in a “struggle to find a feminine voice.”

In Cathy McMorris Rodgers, a mild-mannered congresswoman from eastern Washington, an increasingly visible Romney surrogate and apparent aspirant to be his running mate, they seem to have found it. But it can be an awkward fit.

On April 29, McMorris Rodgers found herself representing elected Republicans on "Meet the Press" opposite Rachel Maddow, who told her, “The first law passed by this administration is the Fair Pay Act … The Mitt Romney campaign put you out as a surrogate to shore up people's feelings about this issue after they could not say whether or not Mitt Romney would have signed that bill.  You're supposed to make us feel better about it.  You voted against the Fair Pay Act.”

“It's not about whether or not you have a female surrogate,” Maddow went on. “It's about policy and whether or not you want to fix some of the structural discrimination that women really do face that Republicans don't believe is happening.” McMorris Rodgers, though she tried to interject, didn’t get a response in.

But McMorris Rodgers (whose office did not respond to an interview request) and some of her colleagues seem to think having a female surrogate is, in fact, enough. The true split over charges of a “war on women” is that Democrats, while nakedly seizing on a political opportunity, are mostly talking about real restrictions on reproductive rights that Republicans in the House and statehouses have sought, and often passed, in unprecedented volume since 2010. But Republicans clearly prefer that these not be called “women’s issues” – that they be about “life,” or “babies,” or “religious liberty” or what have you – because otherwise, it starts to look a lot like excessive government regulation of women’s bodies.

Meanwhile, other legislation intended to improve the lives of women – which, like it or not, generally include different biological and social conditions than men – involve crossing key GOP constituencies (in the case of the Lilly Ledbetter Fair Pay Act, business interests; in the case of expanded Violence Against Women Act protections, anti-immigrant and anti-gay contingents).

What does that leave? It leaves simply being born female and being a Republican is considered enough to counter the charges, at least judging by a cheery but substance-free video from the new House Republicans’ “Women’s Policy Committee,” of which McMorris Rodgers is part. Even for those who want to see the paltry numbers of women in Congress increase, this isn’t much – and anyway, there are more than twice as many Democratic women in the House as Republican women, and 12 Democratic women to the five Republicans in the Senate, two of whom are retiring.

It’s not that McMorris Rodgers, the vice chairwoman of the House GOP conference, entirely lacks personal interest or experience in what’s still awkwardly known as “women’s issues,” though anti-tax and anti-environmental policies have most often been her focus. In 2010, she was responsible for recruiting Republican women to run for the House. She co-chairs the Afghan Women’s Task Force with a Democrat, Rep. Donna Edwards of Maryland.

And she happens to be the only woman to have given birth twice while in Congress. Her firstborn son, Cole, has Down syndrome, and McMorris Rodgers has agitated for funding and benefits for disabilities and Down in particular. In an article pegged to Sarah Palin’s run for vice president, McMorris Rodgers told the Times (in its partial paraphrase) that she feels “like many working mothers: caught between her job and 'wanting to be the best mom and best wife you can possibly be ... You're torn.'" While she’s sponsored several bills aimed at helping military families – her husband is a retired Navy officer who she has said "has a new appreciation for stay-at-home parents" – and parents of children with disabilities, broader parental accommodations like paid family leave aren’t even on the table.

Despite those superficial resemblances to Palin, the vice-presidential speculation is highly unlikely to go anywhere. And there's reason to believe that said speculation came mostly out of McMorris Rodgers' office. In April, the Washington Post reported that an aide in McMorris Rodgers' office was, embarrassingly enough, emailing reporters about Romney's potential No. 2:  "One name to keep in mind would be my boss." And the Fix blogger Chris Cilizza wrote, "This morning an email arrived in the Fix inbox from a 'dcpress2012' address, touting the fact that [McMorris Rodgers] was ranked as the seventh most likely VP pick by a website called race42012.com." She acknowledged her interest to the National Review, though she claimed not to be "seeking" the nomination, and said she'd be happy to see Romney pick a woman.

Another difference is that McMorris Rodgers has never been a flamethrower like Palin -- or Michele Bachmann and some of the "Mama Grizzlies" that didn't make it past the 2010 general elections. But being the general in the war against the phrase "the war on women" can require some stepping up. Last week, she appeared on "Hardball" and was grilled by Chris Matthews about why the GOP version of the Violence Against Women Act she co-sponsored didn't include protections for same-sex couples. "Those are side issues that have been attached to this bill,” she stammered.

“They’re not side issues if you’re being beat up by your partner," Matthews blustered. "It’s not a side issue, it’s your life!”

When the topic of contraception coverage came up, McMorris Rodgers accused the president of having started the fight by changing the policy in the first place, and claimed, falsely, that he was making "the Catholic Church" cover birth control.

“If the president can take on an entire faith, an entire religion on this country, think what he can do to individuals," said McMorris Rodgers. "It’s scary.” And suddenly, the transformation seemed complete.