From Facebook to Twitter and once again on Craigslist, a new study shows adult advertising permeates the Web 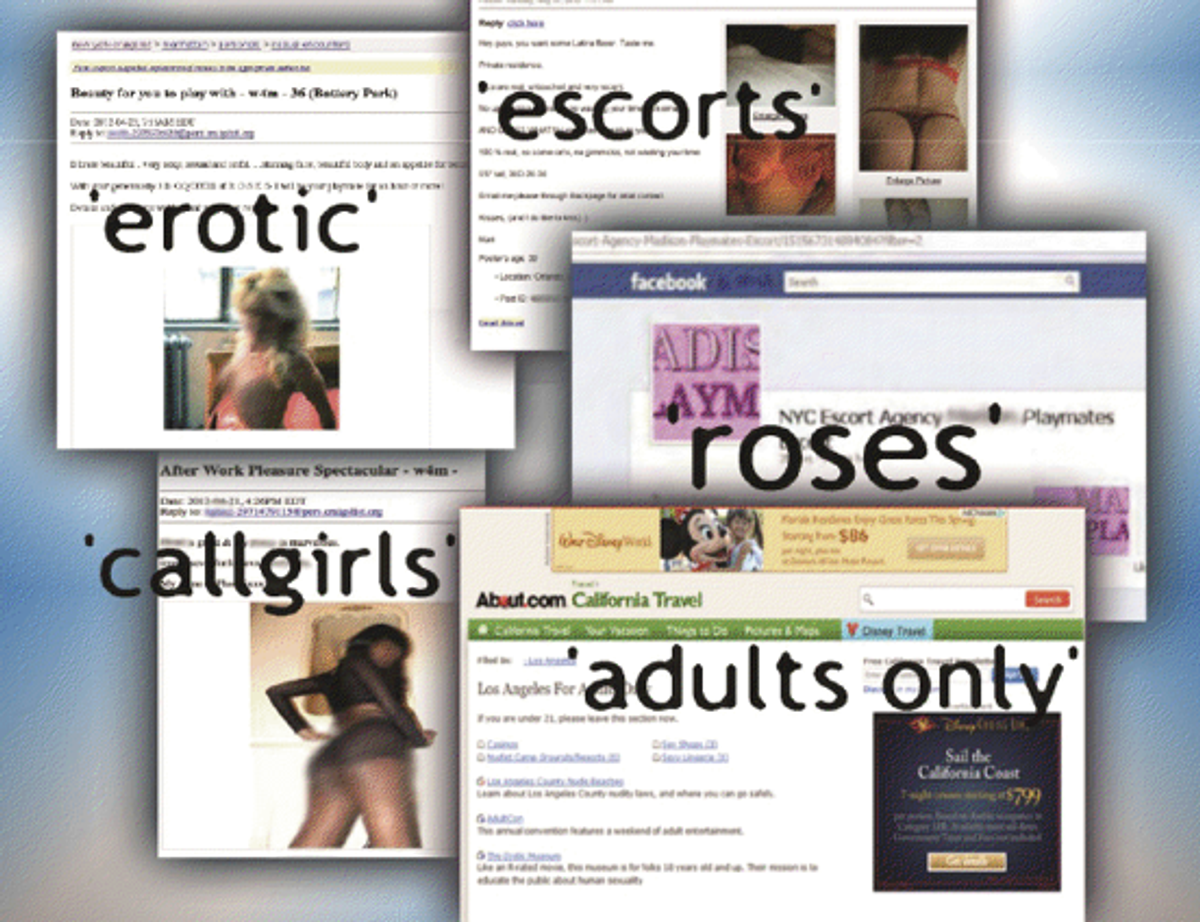 A new report could defend the besieged Backpage.com -- and it comes from the same research organization that has been used in the campaign against the classified-ad site.

Activists calling for the site to shutter its adult classifieds section on the grounds that it promotes sex trafficking -- like New York Times columnist Nicholas Kristof -- have seized on research from Advanced Interactive Media Group (AIM) showing that across a handful of sites carrying prostitution ads, 70 percent come from Backpage. Another significant finding from the organization is that the site's parent company, Village Voice Media, makes $22 million from such ads. Again and again, critics of the site trot out these, and similar, statistics drawn from AIM research -- but the organization’s latest study highlights just how far online prostitution spans beyond Backpage.

In fact, the first lines of the report return to the supposedly resolved issue of sex ads on Craigslist: "Prostitution ads are back on Craigslist. If they ever left in the first place." As the report explains, shortly after the adult section was shuttered, AIM reviewed the classified site and found that "there were few if any blatant ads for prostitution." But now, AIM has found that "ads that appear to be for paid sex work are posted regularly" on Craigslist. Granted, the numbers are much lower than they were before the site closed its "adult services" section -- and specific stats weren't available ahead of this writing -- but "some [ads] were as blatant as they were" before the closure, and a subset included terms like "barely legal" (which is often used to signal the opposite: underage girls).

In addition, AIM found sex ads on mainstream sites like Facebook, Tumblr and Twitter. Mostly, these ads come in the form of Facebook pages, blog posts or tweets advertising an escort service or individual sex workers. Researchers also found such ads on YP.com and About.com (interestingly, the latter is owned by the New York Times Co., which employs Kristof, arguably the most vocal critic of Backpage).

The release lays out the financial benefit to hosting such ads: "Whether free or paid, listings and ads for escort services and similar adult content frequently serve a business purpose for sites like About.com and YP.com," the report explains. "They drive traffic and page-views; they deliver legitimate results for seemingly (or pseudo-) legitimate businesses; and they provide search results with adjacent paid or pay-per-click ads, which can generate revenue as they are served."

The volume of these ads is nowhere near that on Backpage, but AIM's finding shows how easily sex ads proliferate online, even in "legitimate" online venues. Keeping these ads from popping up online is like trying to keep frogs in a bucket.

Asked to comment on whether this latest research poses a challenge to the effort to shut down Backpage's adult section, Peter M. Zollman, founding principal of AIM, said, "Ads for prostitution are in hundreds or thousands of places online, and anyone looking for them can find them. Backpage and Craigslist are just two sites, and both have taken pretty aggressive steps to eliminate ads involving trafficking in children." The AIM report doesn't look specifically at the existence of trafficking ads, as opposed to general sex ads, but as anti-trafficking activists have told me, they see the two as inseparable.

Update: A publicist from About.com tells me the site is "in the process of removing any pages from About.com that include links to escort services" and says "they represent a very small percentage of overall pages on About.com."