Trust me on this: David Bowie's "Hunky Dory" 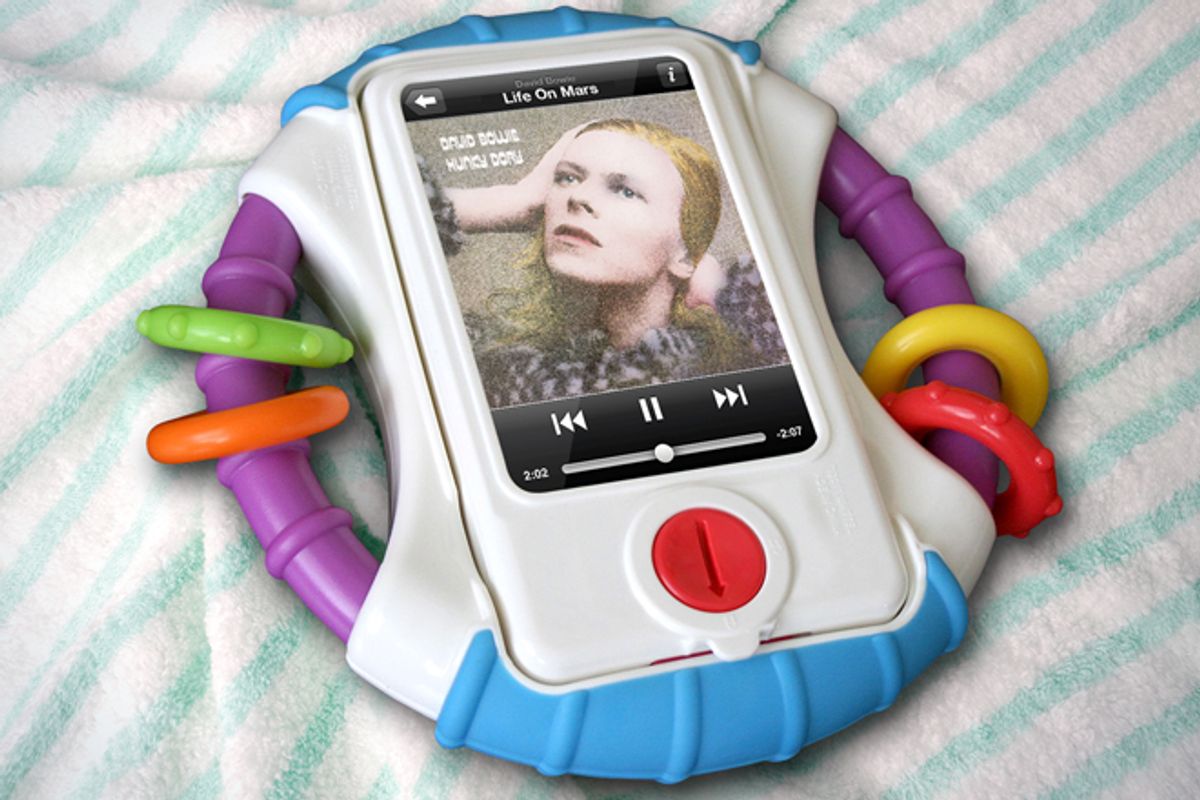 This is the second story in the Trust Me On This series, which runs through Father's Day. You can read the other entries here.

Hey, you turkeys. Listen up. I need you to listen for five minutes. I'm going to impart a little wisdom. You can take it or leave it. For what it's worth, I'd rather you took it.

The advice is this: David Bowie's "Hunky Dory" is a perfect album, and, since perfect albums are a rare commodity, it is worthy of deep and repeated listenings.

I'm listening to "Hunky Dory" as I write this. How many times have I listened to this, my favorite record? Like a million? And it never gets old.

I discovered "Hunky Dory" by accident. I was a sad, lonely little kid. Eleven years old and obsessed with Joan Jett, another artist I imagine you kids would enjoy. Back then, the radio was still a real thing that people listened to, believed in and learned from. I stayed up past my bedtime one Saturday night during the Christmas holiday to listen to a weekly show called "The King Biscuit Flower Hour" featuring a concert by my secret girlfriend, Joan Jett. At the end of the set, she played a cover of a song that would forever change the course of my budding musical tastes, "Rebel Rebel." As it turned out, "Rebel Rebel" would never be one of my favorite Bowie tunes, but I could detect, within its lyric, a narrative voice to which I could relate. Like really relate.

I was a latchkey kid, a thing that no longer exists. Both of my parents worked, so every weekday after school, I had a few hours wherein I could do whatever the heck I wanted. What I usually wanted to do was go to Half Price Books & Records. The next Monday, released from the grim confines of Armstrong Elementary, I walked to Half Price where I found exactly one David Bowie album. I brought home "Hunky Dory," marveling at its weird, androgynous cover. In those pre-Internet days, one was always left with questions. Is that David Bowie on the album cover? Is that person a guy or a lady? Is it a painting or some sort of artsy photo? Is this even rock 'n' roll, or is it some other kind of music, the name of which has been kept a secret from me?

It was just that, some other, new kind of music. New to me, anyway. This album, recorded when I had been less than a year old, opened doors for me. And I thought I caught a glimpse of my own future. My family's house on Gillon Avenue was empty when the needle dropped on Side A. "Changes," turned up to top volume, was my anthem from the first line of the first verse. "Still don't know what I was waiting for," indeed. This was what I had been waiting for. Putting up with all the cruel dullards in my grade school, all the teachers and coaches, all the stupid kids and mean adults, had been almost unbearable. Suddenly, I wasn't alone.

"Hunky Dory" is not a kids' record, but there is certainly a preponderance of imagery relating to childhood. "Changes" speaks of "these children that you spit on." "Oh You Pretty Things" has the song's object driving his "mama and papa insane." In "Kooks," the singer begs his own kid to stay, reassuring the lucky little guy that "we believe in you." At the time, I needed to hear that sentiment.  I went back to it over and over again throughout the difficult years of adolescence. David Bowie was not my dad, but he was there in a pinch.

As the album goes on, it gets weirder. And deeper. And darker. "Quicksand" offers up an epic take on the human experience, turning on a phrase that would echo dangerously throughout those most perilous years of my youth, "knowledge comes with death's release." I didn't understand, but I did understand, if you catch my drift. These were meditations on the difficulty of everyday life, and the insane nature of our very existence. Heavy, beautiful stuff.

Antidotes appear in the record's latter portion. "Happiness is happening/dragons have been bled … fear's just in your head," Bowie proclaims in the goofy-but-right-on "Fill Your Heart." Then he proceeds to introduce the listener to Andy Warhol and Bob Dylan. And then comes "Queen Bitch," wherein we meet Bowie's longtime foil, the most underrated guitarist in rock history, Mick Ronson. The riff in "Queen Bitch" hints at what is to come on Bowie's next LP, "The Rise and Fall of Ziggy Stardust and the Spiders From Mars," Bowie's breakthrough album, but "Hunky Dory" is still pre-fame Bowie at his folkie best.

Finally, he leaves us with the epic poem that is "Bewlay Brothers." As an 11-year-old, I played it repeatedly in an attempt to decipher this song's meaning. I wrote out the lyrics in my journal, hoping to make sense of them. To no avail. I did know that something had gone horribly wrong, there was madness and sadness, and then the record was over. Just like that.

Again and again, I listened. Memorized. Marveled. Sang along. When I could take it no longer, I found a guitar teacher and learned how to do these things myself. Well, not exactly these things, but my own version thereof. My early songs were such a pale imitation of early-'70s Bowie, that I could have been sued -- had anyone ever heard my early songs. It's quite possible that I spent the whole of my teenage years singing with an English accent. As they say, mistakes were made.

I never got over Bowie. Especially "Hunky Dory." Many of his other records have remained favorites: "Low," "Ziggy Stardust," "Station to Station." But "Hunky Dory" was my first love. I caught a lot of grief for my borderline-obsessive Bowie fandom. Kids at school used it as ammunition in their attacks on my masculinity. Did I care? Sure. Did I care enough to throw Bowie under the bus and pretend to withdraw my admiration for this artist who set me on the path I knew I was destined to follow? Hell no. David Bowie was and is my hero.

Listen, kids: I want you to hear "Hunky Dory" because I think you will love it. Like I said, it's a perfect record, and how often do those come along? But the real reason I want you to listen to "Hunky Dory" is because, in its 11 tracks, you will find the clues that will lead you to an understanding of me, your dad. You'll see signposts pointing the way to the path I chose in life.

Making music for a living isn't easy. Many things about it are tough as hell: The touring and its requisite absences; the self-absorption; the occasional financial insecurity; the mood swings one attributes to the "artistic personality." This life, however, is what I was made for. This calling is the only one I've ever known. I'm not curing cancer or solving the global hunger crisis. I'm making music. But there is a certain hazy nobility in that vocation. Somewhere, an 11-year-old kid may be putting on an album of mine and discovering that the universe isn't a meaningless jumble of coincidences, that there is purpose to be found in these three-minute constructions of music and lyrics. Some small but elegant meaning.

Heck, before you guys came along, that was all I had. The great thing is that now I have everything.

Rhett Miller is the lead singer of the Old 97s. His latest solo album is "The Traveler."

Editor's Picks Music Parenting Trust Me On This