Trust me on this: "Star Wars"

A New York Mets all-star explains how he plans to pass the power of the Force on to his son. First in a new series 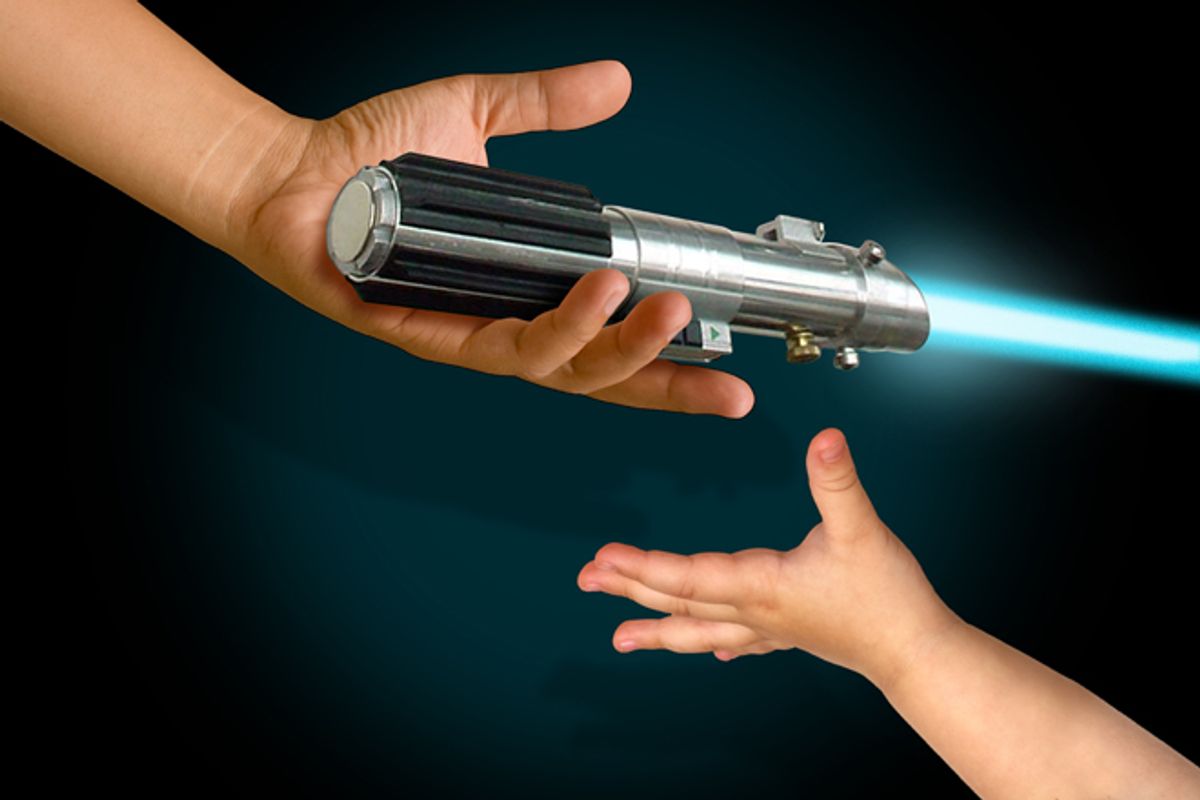 As told to David Daley

I saw "Star Wars" on VHS originally when I was 6. I was just captivated. I would come home every day after school, and before I would do my homework, I would pop it in and watch it, because I was largely alone. Both my parents worked. I remember the play button being green, the pause button was red, and the way the top would pop up and you'd slide the tape in and clank it down. And I remember knowing every line.

As I grew, I began to see "Star Wars" as a metaphor for so much – whether it was the natural depravity of man, or the redemption of man, or the relationship between a father and a son in Luke Skywalker and Darth Vader. That relationship can be broken and redeemed over the course of the trilogy. I really related and connected with it, and it encapsulated a lot of what I want to teach my children – people make mistakes, and they can ultimately be redeemed, even if those mistakes seem egregious, you know, in Darth Vader's case. That there is a choice to be made between what side you choose in life. Our faith is a big part of our family, so the Force has special meaning for me. There's just so many things that I think my son would get, that I hope my son would get.

Eli is 5 now, and we've watched the first one, but I want it to be a rite of passage – and I want to make sure that I watch it with him. So every year, it's the next one. He'll look forward for a whole year to his 6th birthday and "The Empire Strikes Back." When he turns 7, we'll watch "Return of the Jedi." And then we'll probably start them over. Those first three films were just so pure. (I won't show him the other ones until later. This is about the three that I grew up with.)

My dog was named Luke Skywalker. Even now when I come out to pitch, they play the "Imperial March." So I have had some good times with it. The thing that resonates with me, that I want my son or my daughters to cling to, is just that quintessential human emotion of hope that runs through every episode. In fact, I think the title of the very first one is "A New Hope." I want to be able to communicate that to my son – the essence of what hope is and how you see it played out in the movies. But there's so much more there. It sets the stage for great conversation. It's very relatable. Hey, remember when Luke was tempted by the dark side in "Star Wars"? Well, you know -- it happens. Here are some ways to deal with it. So it's perfect.

My favorite is "The Empire Strikes Back," when Luke finds out who his father really is, and is destroyed by it, just utterly dejected. But his whole being is not destroyed – there's still hope. That scene: I know there's still good in you. There's good in you. I sense it. And, of course, as a kid I remember liking all the fights and the spaceships -- all that just makes your imagination go.

When you’re young and in the moment, you’re captivated by the pure entertainment value. I wanted to be Luke Skywalker. I wanted a Princess Leia on my side. But as I grew, I saw it through a different lens. You see so many movies, and you might take something from one, but most you just forget about. What's neat about "Star Wars," the trilogy, is that I've reflected on that hundreds and hundreds of times, especially since growing into an adult and thinking about life lessons that are relatable and why people develop the way they do. It certainly motivated me to think beyond the box.

My girls are 10 and 8, and they've both seen the trilogy. Sometimes I feel like a professor teaching the same class. What's great now is that we own them, of course. We have them all in HD -- we're not watching them on a scratchy, grainy VHS like I had to all those years ago.

R.A. Dickey is a starting pitcher for the New York Mets and author of the memoir "Wherever I Wind Up: My Quest for Truth, Authenticity and the Perfect Knuckleball"

Editor's Picks Sports Star Wars Trust Me On This