After a new rant about Obama's birthplace, Romney needs to cut all ties with the birther loon 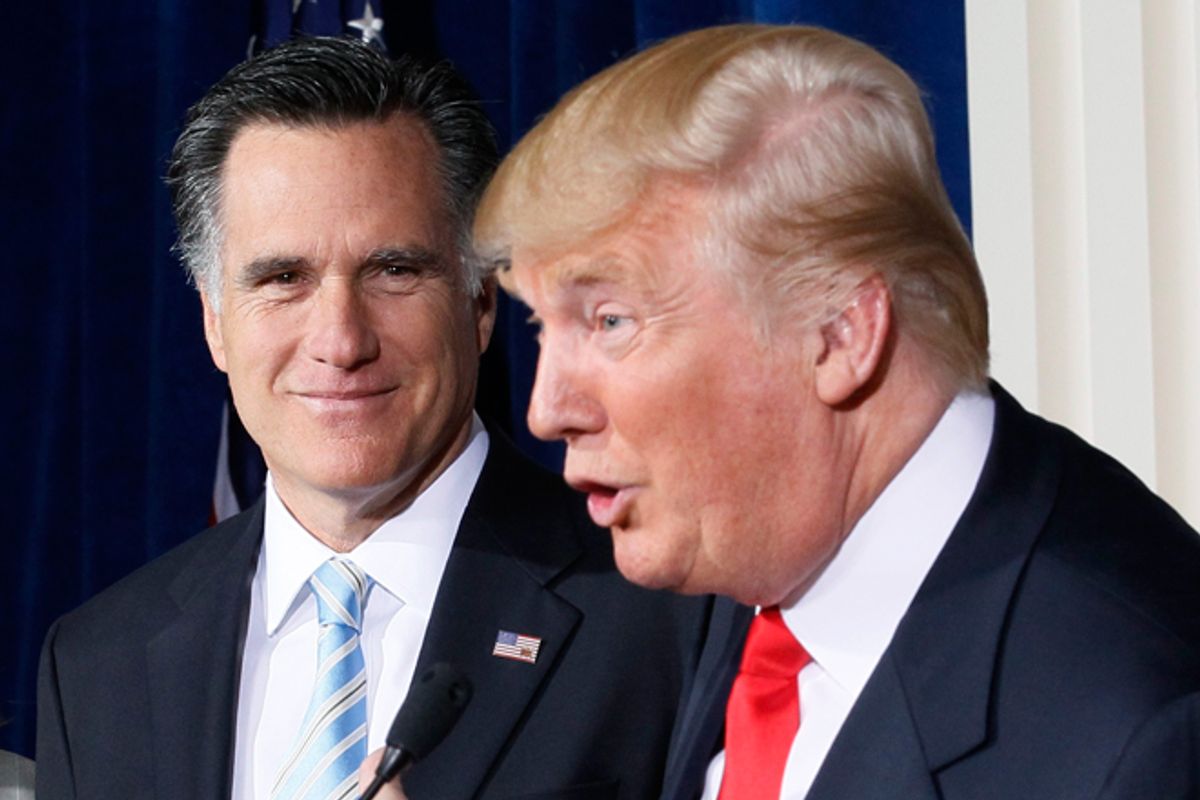 Yesterday it was funny: Mitt Romney announced he was having a fundraising contest to let supporters win a dinner with the farce that is Donald Trump. President Obama has raffled off dinners with George Clooney and former President Bill Clinton; Mitt's got Trump. Any questions? Do you see a stature gap between the two campaigns? Do you want to have dinner with two guys who like to be able to fire people? Whatever floats Mitt's boat.

Today it's appalling: puffed up by Romney's flattery, the preening, orange-haired narcissist doubled down on his idiotic birther claims against the president, telling the Daily Beast's Lloyd Grove: “Look, it’s very simple. A book publisher came out three days ago and said that in his written synopsis of his book, he said he was born in Kenya and raised in Indonesia. His mother never spent a day in the hospital.”

If you haven't been following the story, and I tried not to, the addled spawn of Andrew Breitbart found a dusty 20-year-old catalog from Obama's former literary agency that said he was born in Kenya. An assistant quickly said that she wrote down incorrect information. Trump doesn't believe her.

“That’s what he told the literary agent,” Trump told Grove. “That’s the way life works … He didn’t know he was running for president, so he told the truth. The literary agent wrote down what he said … He said he was born in Kenya and raised in Indonesia … Now they’re saying it was a mistake. Just like his Kenyan grandmother said he was born in Kenya, and she pointed down the road to the hospital, and after people started screaming at her she said, ‘Oh, I mean Hawaii.’ Give me a break.”

Give us a break, Mitt. It was already embarrassing that you were using Trump as a fundraising lure – why not raffle off a dinner with Dick Cheney, who's hosting a fundraiser for you in July? At least Darth Vader has gravitas; Trump is a joke. Pretending to run for president, Trump made birtherism his big issue, and ultimately Obama responded by prevailing on the state of Hawaii to release his long-form birth certificate – a truly sad moment for this country, when the overwhelmingly elected president, a black man, has to show a nasty rich white guy his papers.

If you ever want an example of the vicious political double standard that helps Republicans in this country, here it is: Democrat Hilary Rosen said something inartful about Ann Romney being a stay-at-home mom, and the entire Democratic Party had to denounce her; Obama campaign leaders tripped over themselves to be the first to push her under the bus; Rosen immediately apologized. But Romney has been able to keep his ties to Trump as well as misogynist Rush Limbaugh without political penalty -- so far.

This is a moment for the presumptive Republican nominee to stand up for sanity and distance himself from the crackpot birther fringe, and tell Trump he's going to have to cancel their dinner date. Maybe he's got to wash his hair that night. Or one of Ann Romney's cars.

Does Romney have the integrity and courage to do that? I don't think so, but I'd love to be surprised.