Will Congress let the military cover abortions in the cases of female soldiers who suffer rape or incest? 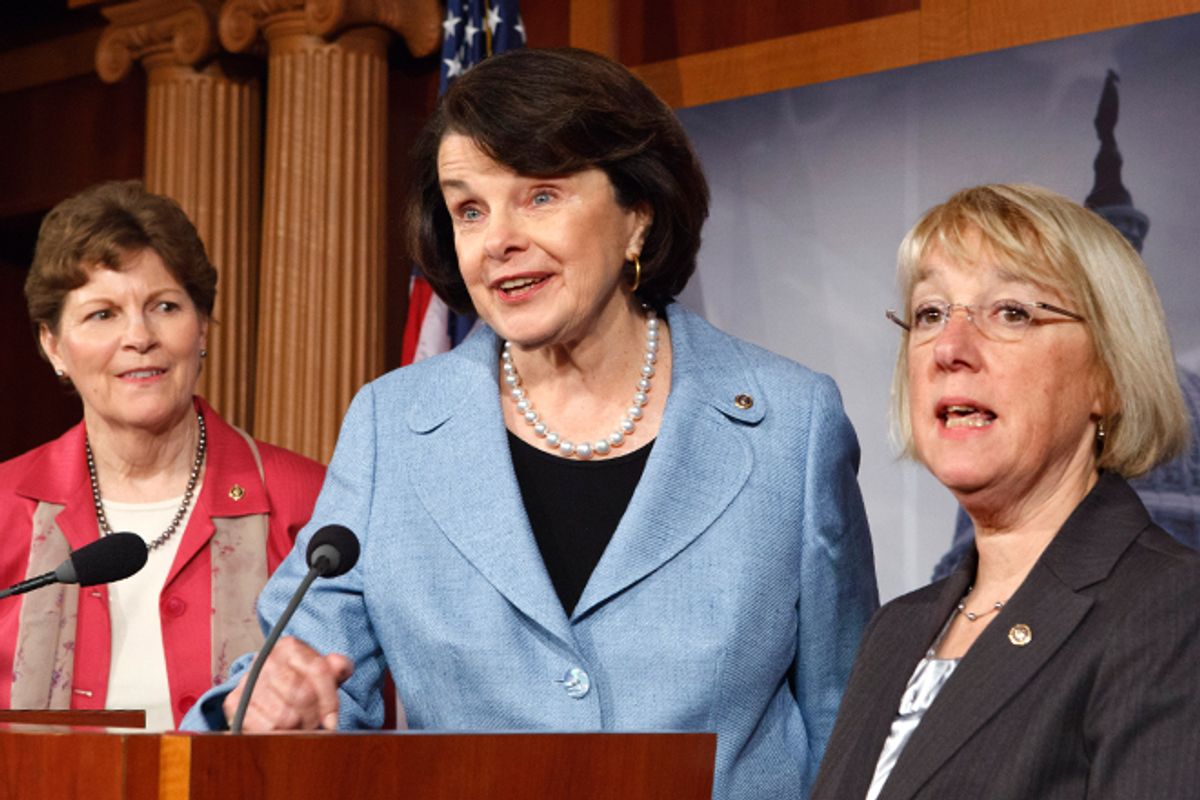 As political dares go, this one could hardly have been more blatant. “[Republicans] say they didn’t launch a war on women,” Sen. Barbara Boxer said Wednesday, “so we’re giving them a chance to walk this back.” She added, "Personally I say it’s a war on women, and the more they protest it the more I say it." And Sen. Barbara Mikulski channeled "Network" (or maybe old-school feminist rage): "We’re mad as hell and we’re not gonna take it anymore.” Even Harry Reid got in on the action, saying on the floor yesterday, "Republicans deny they’re waging a war on women, yet they’ve launched a series of attacks on women’s access to healthcare and contraception this year. Now they have an opportunity to back up their excuses with action.”

What spurred such rage? Nothing so incendiary as transvaginal ultrasounds or birth control -- just the Paycheck Fairness Act, which passed the Democratic House in 2009 but fell to a filibuster by two votes in the Senate in 2010. It modifies the 1963 Equal Pay Act, strengthening enforcement and creating better mechanisms for wage transparency, and authorizes new research on the pay gap and a grant program to teach negotiation skills to women and girls. And while it probably doesn't have a prayer in the House -- if it can even pass this Senate -- it manages to bring feminist-friendly legislation back on the table while doubling as a political tool to force Republicans into an uncomfortable corner.

Better yet, it gets to the subject Republicans have intermittently accused Democrats of obfuscating: the economy. As Sen. Patty Murray taunted in a press conference, "To those Republicans who claim to be so concerned about the economy, now is your chance to sign on, When women are not paid what they deserve, middle-class families and communities pay the price."

Whatever happens with the Paycheck Fairness Act (likely nothing) or the dueling versions of the Violence Against Women Act, this week also saw a bill move that, if it makes it into law, would represent a rare, if tiny, expansion of abortion access on the federal level. That would be the Shaheen Amendment, named for another female Democratic senator, which allows female servicemembers -- who suffer disproportionate levels of sexual assault -- insurance coverage for abortion in cases of rape and incest. (Currently, the Department of Defense offers coverage only if the woman's life is in danger, a much more limited policy than that of other federal employees.)

The amendment passed in the Senate Armed Services Committee's version of the National Defense Authorization Act, with three Republican votes -- Sens. John McCain, Scott Brown and Susan Collins. (Democrat Ben Nelson voted against it). Of course, if it manages to get through the full Senate, it has the anti-choice House to contend with. That it would be incredibly narrow says a lot about the state of reproductive rights in this country -- after all, rape and abortion exceptions are a compromise that, while reflecting American public opinion, truly jibe with neither side's actual worldview. But you have to start somewhere, and a time of heated political rhetoric about women's rights is as good as any other.