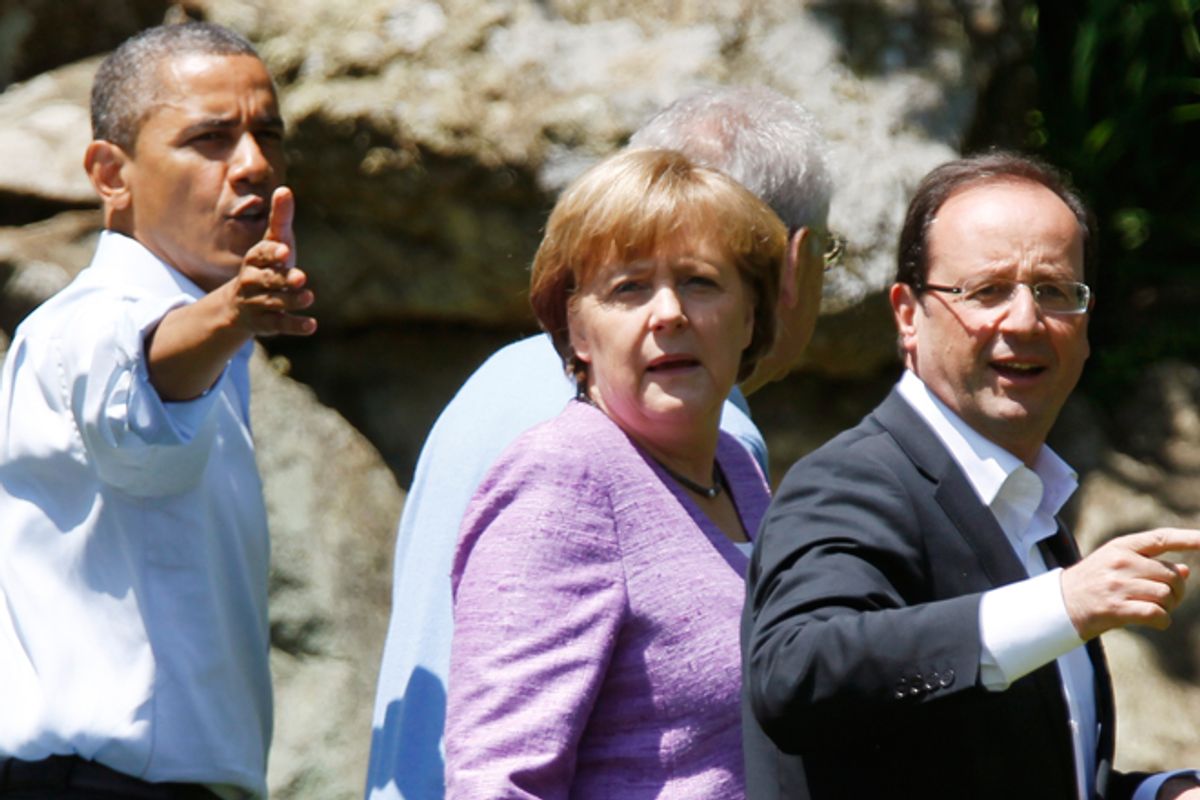 May 2012: Barack Obama is warned before the Camp David G-8 summit that the financial maelstrom seizing Europe could turn out even worse. If much of Europe slides back into double-dip recession, as Britain has done, millions of Americans will be smacked hard, from Toyota workers in Kentucky to lettuce pickers in sunny California. And almost certainly, Mr. Obama will have turned over the keys to the White House come next January to the “vulture capitalist” Mitt Romney.

Here is the dreadful scenario that growing numbers of analysts fear: Long lines of Greeks, Spaniards and Portuguese pound on bank doors demanding to pull their money out before it is replaced by devalued drachmas, pesetas, escudos. Long-suffering Greek voters fail on June 17 to elect political parties that can form a governing coalition, and Greece takes a messy exit from the Euro. Europe’s already faltering financial system then collapses, sending the entire world into a long-lasting global depression for the new President Romney to tackle.

As one European insider put, the damage could be somewhere “between catastrophic and Armageddon,” while Mexico’s former central banker, Guillermo Ortiz, who was a leading candidate to head the International Monetary Fund (IMF), warned that a Greek exit from the Euro could have “an even bigger impact” globally than the Lehman bankruptcy. “If Greece leaves the eurozone, it could detonate a global financial crisis even worse than the 2008 credit crunch, dry up global trade financing and spur another U.S. recession.”

Seeing all this before the Camp David summit, President Obama joined with France’s mildly socialist president François Hollande in calling for new measures to stimulate European growth, against German Chancellor Angela Merkel’s insistence on austerity über alles. Obama went even further after the NATO summit in Chicago and urged European leaders to recapitalize their notoriously weak banks — and quickly. But his foresight will mean little if they do not come up with a hard-hitting and fast-moving plan of action, which their Wednesday night summit in Brussels failed to do.

Except for minor concessions toward growth, Merkel is standing firm on growth-destroying budget cuts. The “growth agenda” that Hollande and his Italian and Spanish allies put on the table looks like far too little and much too late to stop a global train wreck. And the bleary-eyed announcement early Thursday morning that European Council president Herman von Rompuy would draft a new plan for greater economic unification to back up the Euro looks like a belated step in the right direction that Europe should have taken years ago, preferably before creating the single currency, as American economists warned at the time.

In the meantime, the Euro is falling, investors are dumping Euro assets, and all eyes are on the June 17 do-over of Greek legislative elections, in which European leaders are playing a double game that will come back to haunt them. Publicly, they reaffirm their commitment to “do everything” to keep Greece from leaving the eurozone while framing the elections as “a referendum” for the Greeks to decide whether or not they wish to remain on the Euro. The major media echo the referendum line, and the once-great Le Monde even ran a front-page editorial by its director boldly proclaiming: “The Euro or the Drachma? It’s up to the Greeks to choose.”

In fact, all this poses a premeditated and not at all disguised threat to Greek voters: Back the conservative New Democracy and the Greek Socialist Party (PASOK), who conspired with Northern European banks and exporters to create the Greek mess and then agreed to the no-hope bailout deal forced on them by the European Union, the European Central Bank and the International Monetary Fund (IMF). Back the corrupt old guard who will do our bidding, the European leaders threaten, or we’ll push you even harder. And stay away from the left-wing SYRIZA coalition and its surprisingly effective leader Alexis Tsipras, a 37-year-old former student protest leader and Euro-communist.

Why threaten the Greeks? In their first election on May 6, SYRIZA came in second, and the latest polls now show them winning, but still without sufficient votes to form a government. They would, however, have the votes to make it impossible once again for the old guard to form a governing coalition. The party's growing strength terrifies investors and poses a problem for European leaders, especially those from nominally socialist or social democratic parties that face similar challenges from a more radical Left.

Contrary to the pretense that Tsipras and SYRIZA want to leave the Euro, they have said again and again that they want to keep the Euro. They know that as many as 75 to 80 percent of the Greeks favor both the common currency and the European Union, and they might well refuse to leave even if the rest of Europe wants them out. Nothing in existing treaties permits expelling any country from the eurozone, and this gives Tsipras and SYRIZA a powerful threat of their own in rejecting the bailout deal, which has destroyed the Greek economy and squeezed ordinary Greeks beyond all endurance.

“We want to force European leaders to face reality,” Tsipras said Monday in Paris in the company of Jean-Luc Mélenchon, the leader of France’s Left Front, which is challenging Hollande’s party in legislative elections on June 10 and 17. “We want to raise awareness that we cannot drive any people in Europe into voluntary suicide.” If not stopped in Greece, Tsipras warned, the same treatment “will be exported to other European countries.”

In refusing even to renegotiate the “hellish” bailout deal, Tsipras is demanding that Europe and the IMF back down, an alternative that European leaders and their friends in the media portray as completely beyond reason. “It is not acceptable for a small country, by its refusal to play by the rules of the game, to continue to put the whole continent in danger,” concluded the front-page editorial in the pro-Hollande Le Monde. “It’s up to the Greeks to choose.” But if they make the wrong choice, the consequences will follow. And “without any qualms.”

That, in all its imperial splendor, is the threat Greek voters now appear to be ignoring. As Tsipras insists, Europe and the IMF will back down, and elements of their retreat are already visible. Hollande, who refuses even to meet with Tsipras, has suggested a willingness to give the Greeks additional time to cut their public spending, while a senior adviser to the German finance ministry suggests that Merkel will blink and make concessions to both Hollande and the Greeks after the elections. But nothing we’ve seen is anywhere near enough to put the Greeks – or the rest of Europe – back on the path to growth and away from leaving the Euro. That would take more than anything now on the table, and the smart money is betting Greece will leave the Euro by New Years Day 2013, with all the damage that will bring.