Her shocking decision caused the web to explode. But feminist or not, it was the smart call 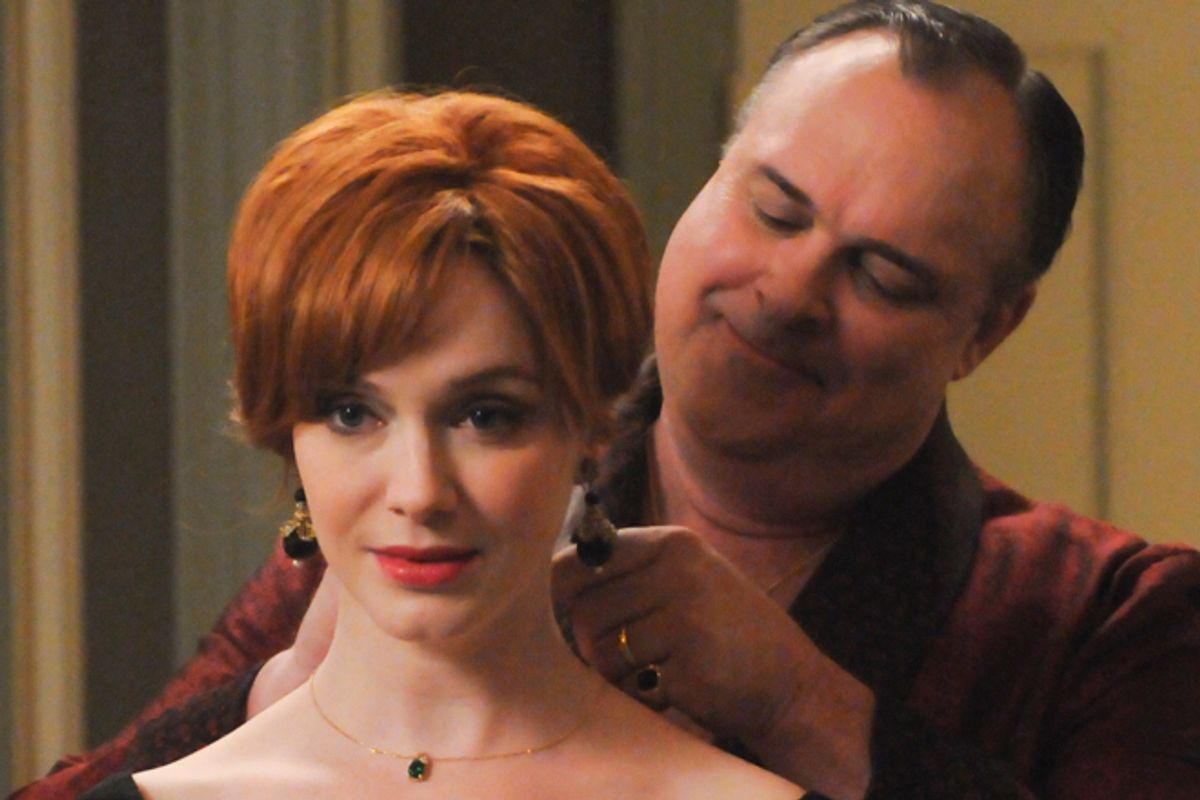 It occurred to me, days into being haunted by the most recent "Mad Men," that there was some oblique foreshadowing to Joan’s terrible choice. “Why do they get to decide what's going to happen?” That’s what Pete Campbell demanded several weeks ago in an episode titled “Lady Lazarus.” “They just do,” Harry Crane responded.

But we’re talking about a man who blackmailed a scared au pair into having sex with him – rape, to my mind – and, when he showed up at Beth’s home with her husband after she rejected him, seemed to be trying for a repeat. In Pete's turn this week as Joan Harris’s pimp, stacking the deck to make her choice all but inevitable, he is trying to restore a sexual order where women have very little decision at all. No wonder the selling point of the Jaguar is whether you can truly own something beautiful -- this episode is all about men trying to own women.

This is entirely in character for Pete – and also for the morally weak men of Sterling Cooper Draper Pryce, prostitution-client and client-bedder Don Draper included. But I’m disturbed by the suggestion in many reactions – including in Salon's excellent recap – that we should be disappointed in Joan as a character. Nelle Engoron argues that “seeing Joan allow her body to be used in this fashion is worse because of what it suggests about her character. We’re not long past the time when all women who gained a position of any power were accused of sleeping their way into it. To literalize that degrading accusation in Joan renders her less than we’ve always thought her to be.”

But in striking a deal that involves an ownership stake in the company that seems to matter more to her than her own family, Joan doubly takes possession of the means of production. It’s not “empowering,” and it’s a partly coerced decision – she’s not even given accurate or full information about the partners’ response, who were in turn misled about her position, and she believes they think she’s a whore anyway -- but it’s a rational choice that will give her much more autonomy than anything else available to her.

As Amanda Marcotte put it in the comments of her excellent video recap, “this episode really exposes how people see sex work, especially the perplexing ... belief that selling is worse than buying ... or pimping. Which is pure, unadulterated misogyny.” It’s true that Joan has plenty to offer the firm beyond her gorgeous breasts, but after 13 years and one brilliant but unappreciated turn as a script reader, the men at the firm still see her as either the seductress or the tough mom figure. (Peggy managed to de-sexualize her image, but she has become professionally invisible at the company.) Meanwhile, after an on-again, off-again relationship with Roger that definitely was on the prostitution spectrum regardless of her feelings for him, Joan has clearly come to believe that she can’t rely on him either emotionally or financially.

Most relevant of all is the fact that finally taking the respectable route of marriage – itself traditionally transactional -- has failed Joan. It has not protected her in any sense – not from sexual or emotional harm, or from her “honor” being besmirched, or from financial instability. The men at SCDP seem to feel like they vaguely need to put up a fight not because Joan is a human being who should be in charge of her own bodily autonomy, but because of a chivalric urge that either puts women on a pedestal or concedes them as the property of another man, as Don Draper tries to do by saying Joan is married. Of course, not only does he know full well that her marriage is over, he’s been an active perpetrator of the undermining of marriage as an institution of either protection or respect.

Yes, Don is trying to change with his marriage to Megan, in which he not only has been faithful (so far as we know) but also no longer holds all the cards. In this week’s episode, Michael Ginsberg’s awed declaration that Megan Draper comes and goes as she pleases echoes Pete’s bitterness about women calling the shots. For a brief minute there, Megan seemed to be pulling off a rare balance for the office – a conventionally beautiful and sexually confident woman whose ideas are actually taken seriously. But she only got there by marrying well, and while she may be wielding a lot of power in the relationship now, she still essentially serves at Don’s pleasure. Joan, on the other hand, owns something that will last as long as the firm does.