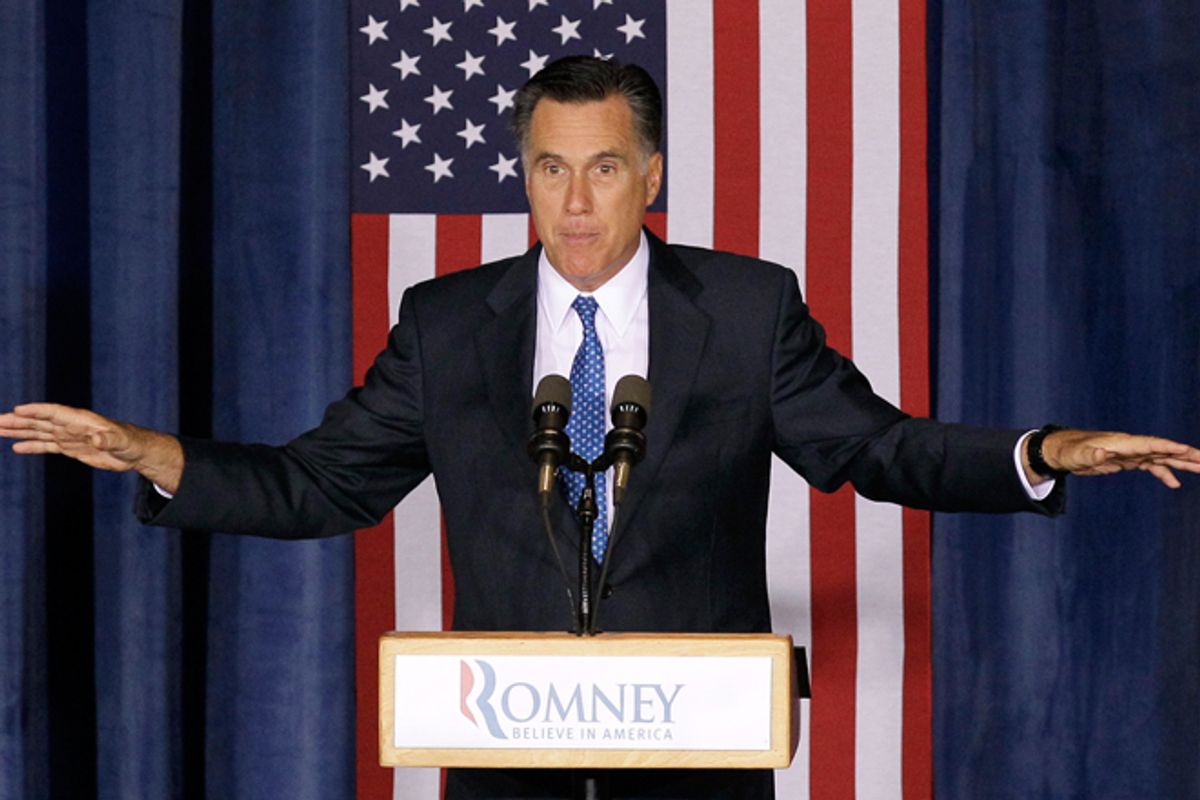 Sometimes it is almost too insultingly easy to connect the dots.

Last week, Mitt Romney blasted Barack Obama's record on education in a high-profile speech and white paper. The critique ranged from kindergarten to grad school, but let's pick out one issue that we've been following at Salon for some time. On the specific topic of for-profit schools of higher education -- notorious both for saddling students with high levels of debt and for their abysmal graduation rates -- Romney promises to repeal Obama's "ill-advised" regulations targeting the sector.

The for-profit school industry gives Mitt Romney a lot of money. One of Romney's top education advisors is William D. Hansen, who has lobbied extensively for for-profit schools. As deputy secretary of education under George W. Bush, Hansen is well known in the higher education community for issuing a directive promising that the Bush administration would relax the enforcement of rules meant to crack down on student enrollment recruiting abuses at for-profit schools.

That's right: A man directly responsible for unleashing a decade of egregious misbehavior at for-profit colleges is now advising Mitt Romney on his plans to repeal new rules intended to clean up the mess.

The biggest for-profit schools generate 80 to 90 percent of their revenue from federally guaranteed student loans. Only one out of every ten American college students attends a for-profit institution, but these students account for a quarter of all student debt and almost half of all student loan dollars in default. There's no sugar-coating it: The booming for-profit industry is one of the worst possible examples of the "free market" in action that one can find in the entire U.S. educational sector. For-profits charge higher tuition rates than their public school competitors, graduation rates are lower, and the entire business would not exist without massive government subsidization in the form of cheap student loans.

Last June, in an effort to address this clear market failure, the Obama administration released a new set of rules designed to tighten eligibility for student aid. Going forward, the new rules will require that most for-profit programs prove they are preparing "students for gainful employment in a recognized occupation."

The "gainful employment" rules have three parts: At least 35 percent of former students must be actively repaying their loans, and their loan payments must not exceed 30 percent of their discretionary income, or 12 percent of their total earnings. Schools will also be required to make public information on program costs, debt-to-earnings ratios and loan repayment rates, so prospective students will be able to properly judge the quality of the programs so desperate to enroll them. If a school failed to meet these criteria three times in a period of four years, it would no longer be eligible for federal student aid programs.

But according to Mitt Romney's newly released white paper on education, the "gainful employment" rules are "confusing and unnecessary regulations that primarily serve to drive costs higher" and that have "made it even harder for some providers to operate while distorting their incentives." So he is pledging to get rid of them.

Yes, it will cost more money to document just how well a "career school" is doing in preparing students to actually embark on a career that pays well enough to pay down the debt accumulated while attending that school. But when your entire business model is based on signing up as many students as possible, nearly all of whom pay their tuition with government loans, some might argue that perhaps it would be a worthy goal to pay a little more attention to whether those students are actually getting educations. And to argue that the new rules distort incentives is baffling. The current incentive structure encourages schools to emphasize high enrollment and profit. That's what Obama is trying to fix.

Neither Mitt Romney's speech nor his white paper mention any of the problems exhibited by the for-profit sector. Maybe that's to be expected when your top advisor has worked as a lobbyist for the Apollo Group, which owns the University of Phoenix, and when that advisor's main claim to fame during his stint in the Bush administration was letting for-profit schools know that the government would look the other way as enrollment was boosted by any means necessary. And of course, philosophically speaking, it's not surprising that a firm believer in private enterprise would have a vision of a higher-education future in which competition in the for-profit sector would deliver innovative new models that offer high-quality instruction for low cost.

Except, that's not the way it works now. The for-profit college sector delivers low-quality education at a high cost, precisely because it is unregulated and unaccountable and has been assured an unlimited supply of student loan dollars. Repealing rules aimed at addressing that disaster won't fix the problem -- it will just make it worse.