Will another far-right candidate score an upset in the Lone Star State's GOP Senate primary? 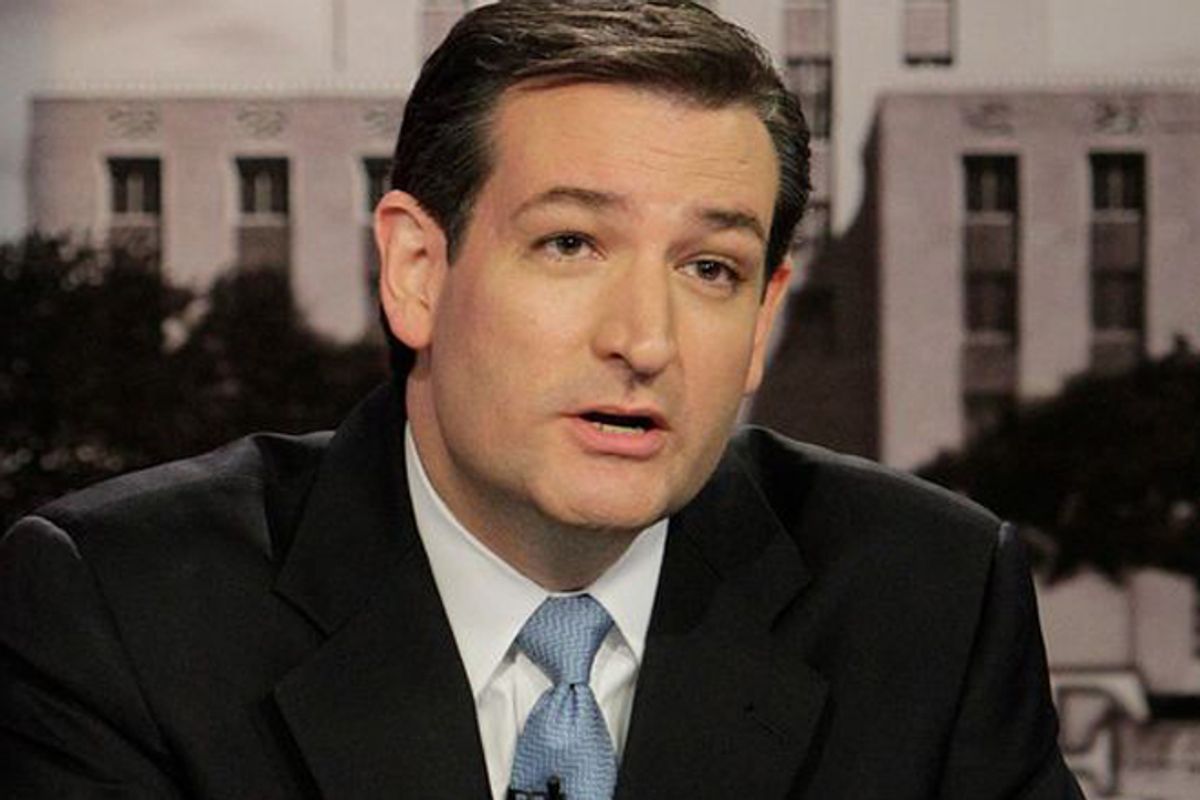 Today’s GOP Senate primary in Texas has been described as a classic Tea-Party-versus-establishment contest, but a better way to look at it is the hard-right versus the very-hard right.

The establishment pick, in this case, is David Dewhurst, the state’s lieutenant governor, who has the backing of Governor Rick Perry and plenty of national name-brand Republicans, along with tons of money. But this is Texas, after all, and as Rice University political scientist Mark Jones told Salon, “David Dewhurst is no RINO.” Dewhurst would be among the more conservative members of the Senate, if elected, Jones said, noting he’d be well to the right of the seat’s current occupant, retiring Sen. Kay Bailey Hutchison.

A few notches farther to the right you’ll find, Ted Cruz, the state’s former solicitor general, who is Dewhurst’s main challenger in today’s primary. “Cruz is an ideologue,” Southern Methodist University political scientist Cal Jillson told Salon. “He would be decidedly more conservative than either [Texas Senator John] Cornyn or Dewhurst. They’re staunch conservatives, but at the end of the day, they’ll try to get something done.”

Dewhurst has the edge going into the election, but there’s a catch: Under Texas law, if he doesn’t capture at least 50 percent of the vote today, he’ll face a runoff election in July, when his prospects will be decidedly worse. Two factors are working against Dewhurst today: a third candidate in the race, former Dallas Mayor Tom Leppert, who will siphon off votes, and the fact that a runoff would likely come down to turnout. “It’s going to be the really intense, really fired up voters” who show up in a runoff poll, University of North Texas professor Matthew Eshbaugh-Soha told Salon. “And that tends to be the Tea Party guys.”

Jillson said the race is emblematic of the Tea Party’s role in this year’s election cycle. In 2010, the conservative insurgents took on actual moderates. But now that they’ve already picked all the “low-hanging fruit,” they've moved on to conservatives like Dewhurst and Sen. Dick Lugar, who recently lost his GOP primary in Indiana. This has pushed everyone to the right, Jillson said: “The next tier of senators saw what happened in 2010 and said, ‘Oh shit.’ They had been conservative, but legislators ... so they not only stopped doing that, but moved about 10 points to the right.”

Cruz, who went to Princeton and Harvard Law School, is the latest in a strain of Tea Party candidates with impressive pedigrees that make their whacky or radical views seem palatable. Ian Millhiser, Senior Constitutional Policy Analyst at the left-leaning Center for American Progress Action Fund, told Salon that Cruz represents a “second generation of Tenter Senate candidates” -- more careful than failed 10th Amendment lovers two years ago who said outright that Social Security or the minimum wage ought to be abolished. “I think he’s learned the lesson from people like Joe Miller and Sharron Angle,” failed Senate candidates from Alaska and Nevada, “that he needs to be more circumspect in his rhetoric,” Millhiser said.

Nonetheless, Cruz has adopted some fairly out-there positions. In March, he posted a message on his campaign website railing against a “grand scheme” by left-wing billionaire George Soros to use the United Nations to outlaw golf courses and paved roads. The U.N.’s “Agenda 21” project has long been a bugaboo of the black helicopter set -- despite the fact that George H.W. Bush signed on to the 20-year-old environmental project -- but it’s unusual to see a top-tier Senate candidate discuss it. “Obviously, whenever people start talking about George Soros-based conspiracy theories, they’re already putting themselves in an elite category of paranoid extremists,” Millhiser said.

As a conservative legal activist, Cruz advocated a method to use the 10th Amendment to exempt states from federal law that has its roots in the pre-Civil War nullification movement. He also co-authored a policy paper advocating an unusual reading of the Constitution that would declare unconstitutional Medicaid and many federal education programs.

Despite this, or perhaps because of it, Cruz has attracted tremendous support from national right wingers like Sen. Jim DeMint (R-SC) and Sarah Palin, as well as outside groups and super PACs. Independent groups have spent $1.7 million backing Cruz in one of this year’s most expensive Senate race so far. “He’s once-in-a-generation type candidate for FreedomWorks, for the Tea Party movement,” said Brendan Steinhauser of the national Tea Party group, which has spent almost $100,000 backing Cruz.

Dewhurst, who has raised $6 million and chipped in another $8 million of his own money, has been trying to spend Cruz into submission. “Dewhurst is everywhere,” Eshbaugh-Soha said, saying ads have even popped up on ESPN.com. The campaign is clearly worried about not capturing 50 percent today, as experts agree Dewhurst will have a much tougher time winning the runoff. And because the Democrats have essentially zero hope of winning the general, that means there’s a very real possibility that the Senate’s far-right wing will gain another crucial voter in January.