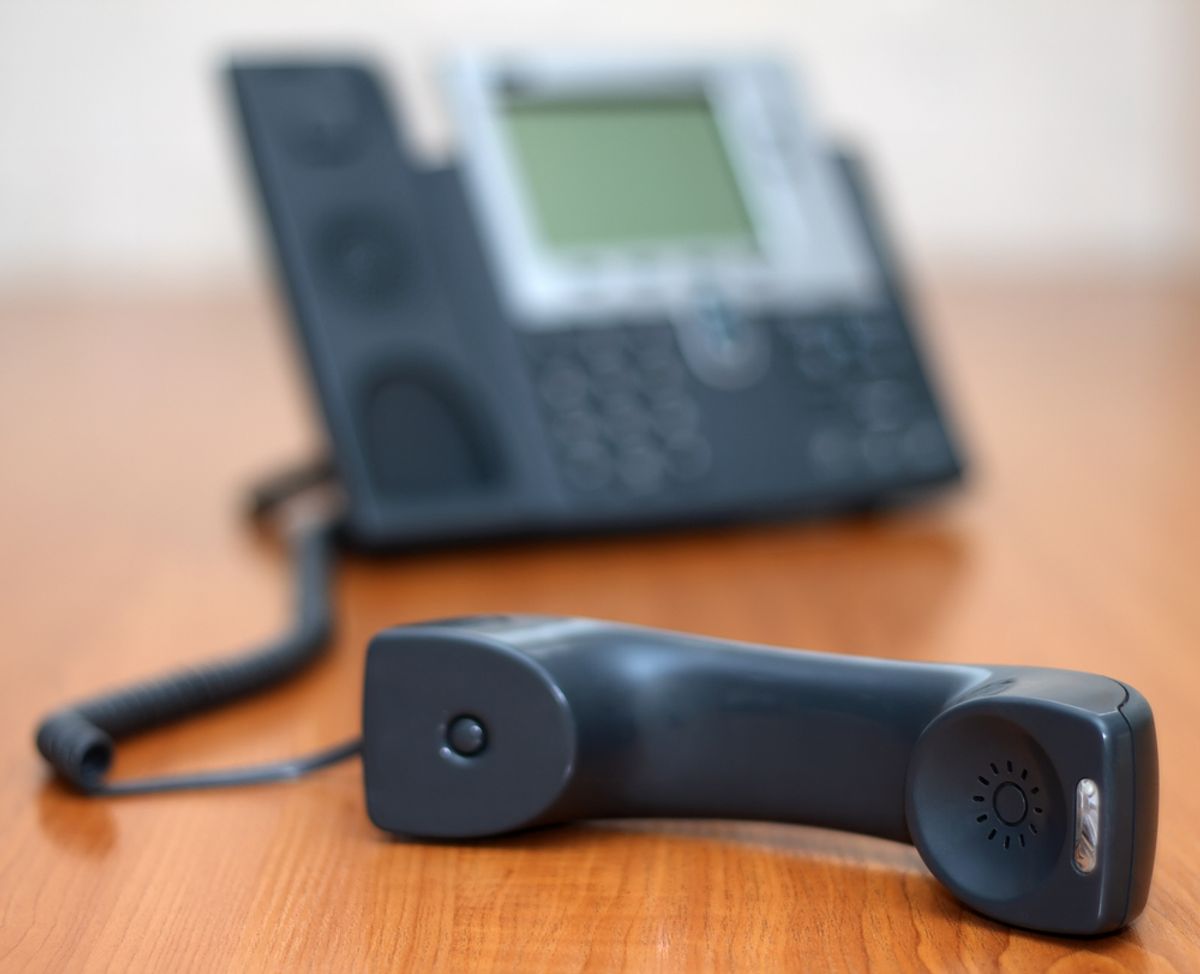 Fighting bills backed by the right-wing American Legislative Exchange Council (ALEC) has been, at times, like a giant game of whack-a-mole.

The entire strategy of the corporate front group is to push its “model” legislation in as many states as possible at once, feeding its member legislators — mostly Republicans, but some Democrats as well -- ready-made bills that were written (for a fee) with the input of the country's biggest corporations.

After the controversy around Florida's “Stand Your Ground” law and the shooting of Trayvon Martin, ALEC said it was backing off such bills to focus on “business-friendly” legislation, but its business-friendly work does plenty of damage, too. ALEC pushes deregulation, union-busting, privatization, and tax loopholes for big businesses, allowing corporations like AT&T, Koch Industries, and Verizon to essentially write the laws that regulate them.

ALEC-backed telecommunications deregulation bills hit New York, New Jersey, and Connecticut recently, in a one-two-three punch combination designed as a quick knockout blow that consumers and workers would be powerless to fight. But a coalition, including the Communications Workers of America (CWA), the Working Families party, and the AARP, managed to stop the bills, which would've resulted in cost hikes, lost jobs, and service cut-offs for “less profitable” customers — disproportionately senior, rural, or low-income customers who use basic phone service.

“We're up against quite literally armies of lobbyists from the phone companies,” Matt Wood, a policy expert with Free Press, told AlterNet. “That's the thing about ALEC and their approach, they can push things in so many different states at once, if not with no coverage, certainly with less coverage on the national level.”

Telecom policy is an area in which legislators very often don't have a lot of expertise and are vulnerable to talk of fancy new technologies — and to big money. Politicians from both parties love to boast of their investment in high-tech, after all, and so when lobbyists are telling them about their fancy new service, throwing around terms like VoIP (Voice over IP, essentially phone service over the Internet, which is what you have if you get your home phone through your cable company or Verizon FIOS), it's easy enough to convince even those politicians who aren't predisposed to deregulating everything in sight. Yet deregulating the fancy new technology has an impact even on those who use traditional services.

“Some company comes to you and says this is going to be great for investment. Exactly what will they be investing in?” Bob Master, political and legislative director at CWA District 1, asked. “Being deeply familiar with the industry, there's no job-creating investment that's happening in telecommunications. It's all job-destroying investment. Verizon is contracting out, outsourcing our work, offshoring our work, trying to do everything wirelessly. That's where the investment is going and no wires means no workers.”

But it's not just jobs that the telecoms would like to eliminate — it's service to people who don't choose to use the fancier products or can't afford expensive service, or maybe who live in a rural area. In Connecticut and New Jersey, the deregulation plan would have eliminated “carrier of last resort” protections, which require them to provide service to anyone who reasonably requests it in their coverage area. Matt Wood explained, “Phone companies have always had special rights and privileges granted by the state, so they've been expected to provide service to everybody. They have taken the true statement that 'broadband service is different' to extremes and said that it is so different that you shouldn't regulate it at all.”

When it comes to VoIP, for instance, Wood pointed out that what sounds like an arcane technology is actually commonplace these days — and the claim that it's too new to regulate actually just gives companies like AT&T and Verizon an excuse to deregulate their whole network. “That takes away a a lot of protections on services, the reliability of the network,” he said.

And Lindsay Farrell of the Connecticut Working Families Party noted, “To give [telecoms] the ability to say 'This part of the state isn't as profitable, we don't want to serve them, we want to serve people here where they can afford higher rates,' that leaves a lot of people in silence.”

As always, with ALEC, the narrative behind the push for deregulation is that competition among phone service providers will keep the industry honest and result in benefits for consumers — but like all tall tales about the invisible hand of the marketplace, this one doesn't come true. “We also look to the results,” Wood said. “Say you do have two, three, four, six competitors, is that resulting in lower prices? No. They're not competing on price; they compete on the device or other bells and whistles but don't really feel the need to compete on price.”

Instead, according to a report issued by the nonpartisan think tank Demos [PDF], the bill (specifically in Connecticut, though you can see from the original model bill at ALEC Exposed that they're all much the same) would send phone rates through the roof, as well as destroy consumer protections and transparency in the industry, preemptively deregulate VoIP as more companies are beginning to use the technology, and of course, let corporations who directly benefit from deregulation write the laws regulating them.

Yet politicians continue to push for deregulation that would hurt their own constituents. Master noted that in New York, it only took a little bit of spending to get normally progressive legislators backing the telecoms' pet plan. “In what way would the low-income people you represent benefit from this?” he asked.

“We believe that to the extent that phone companies are required by regulation to provide good service on a universal basis, it's good for the consumer and the workers,” Master said, and so when CWA got wind of a deregulation bill in New Jersey in 2011, they moved quickly.

The bill, titled the “Market Competition and Consumer Choice Act” (you can't make this stuff up ) swept through the state assembly in short order, passing 66-7. CWA, the AARP, and other allies put together a campaign, including a website “Don't Hang Up on New Jersey” and calls with AARP members — they managed to generate about 20,000 phone calls in two weeks, and even New Jersey's famously right-wing, blustering governor Chris Christie (who has a pattern of supporting ALEC's pet causes himself) took notice. On a conference call, he told 17,000 AARP members that he had “grave concerns” about the bill. From there, they were able to change enough legislators' minds to keep the bill from moving.

But it's not just Republicans who like deregulation and are vulnerable to some well-placed donations. New York's Democratic governor Andrew Cuomo, who values his reputation as a reformer, has also taken a lot of money from telecom companies over his political career. In his race for governor, Cablevision was Cuomo's top contributor, kicking in $125,600 to his campaign, along with $38,800 from Time Warner -- part of $250,516 overall from the industry.

So when VoIP deregulation made it into the governor's budget, it shouldn't have been that surprising. Phone companies and cable companies, who both provide broadband internet service and VoIP service, were working together, pressing for New York State to give up its right to regulate VoIP in the future.

“I think there is in the Cuomo administration an inclination to do things that they believe will help to improve the business climate,” Master said. “In this case it was pretty glaring that there's a lack of awareness or understanding of what the impact on the consumer might be.”

Pressure from a similar coalition, including CWA and the AARP, as well as the Working Families party, got the language dropped from the budget, but not before they noticed legislators whose constituents would clearly be harmed by the policy taking the side of the big telecoms, which Master noted are very powerful in Albany. The state senate subsequently passed deregulation as stand-alone legislation, but so far it hasn't moved in the assembly. “We're being vigilant,” Master said.

But just when one bill dies, another appears. In the beginning of April, SB 447 appeared in Connecticut — another bit of deregulation, based on ALEC model legislation. ALEC's co-chair in Connecticut is John Emra, Executive Director of External Affairs for AT&T’s Connecticut operations.

One of the upsides, though, to these model bills being pushed in multiple states is that organizers know what worked and who is willing to join the fight. Again, CWA, AARP, and the Working Families Party led the charge, but this time the coalition included groups like the Sierra Club, motivated by a provision in the bill that would allow cell phone towers to be placed in public parks.

Farrell noted that as they knocked on doors and made phone calls about the bill in Connecticut, they found people already wary of companies like AT&T. After Hurricane Irene and this fall's series of storms, utility companies and phone and cable companies took several days to restore service, leading to hearings by the state legislature. Canvassers found that citizens didn't trust utilities to take care of them, and understood the need for regulations to hold them accountable.

The ALEC connection helped in New York and Connecticut — in New York, radio advertising linked telecom deregulation to ALEC, and Farrell noticed a difference with legislators as ALEC's activities were held up to public scrutiny. But, she said, the broad coalition that defeated the bill wasn't solely motivated by beating ALEC. “AARP doesn't care about the ALEC aspect,” she said. “They're just worried about seniors who don't use VoIP, who don't have cell phones that they use frequently or at all, being cut off.”

The biggest lesson, perhaps, from the deregulation fights in these states is that organized people can, in fact, beat big money — that a ground campaign involving phone calls and door-to-door canvassing can actually motivate everyday people to take action on an issue that seems complex and hard to understand. Whether people had heard of ALEC and understand that there's an institution pushing for laws that will benefit big corporations and hurt workers and consumers, or whether they were just tired of watching their phone and cable bills creep upward each month and of having to pay for services they didn't need just to get a basic phone line, people didn't want corporate utilities without government oversight.

Corporations can and will spend millions on lobbyists, blanketing statehouses and capitol buildings with their paid advocates, but in this case, it wasn't enough. Farrell is awaiting information on how much was spent lobbying in Connecticut, to compare with what the coalition was able to accomplish for a fraction of the cost.

Still, ALEC and its corporate backers aren't going to give up easily — AT&T and Verizon, Time Warner and Cablevision, and many others still want deregulation and are willing to pay for it. The bills in the three states have stalled, but the fight is on in California right now. Master noted, “These people have infinitely deep pockets and they never stop.”