Trust me on this: The Beatles' "Let It Be" 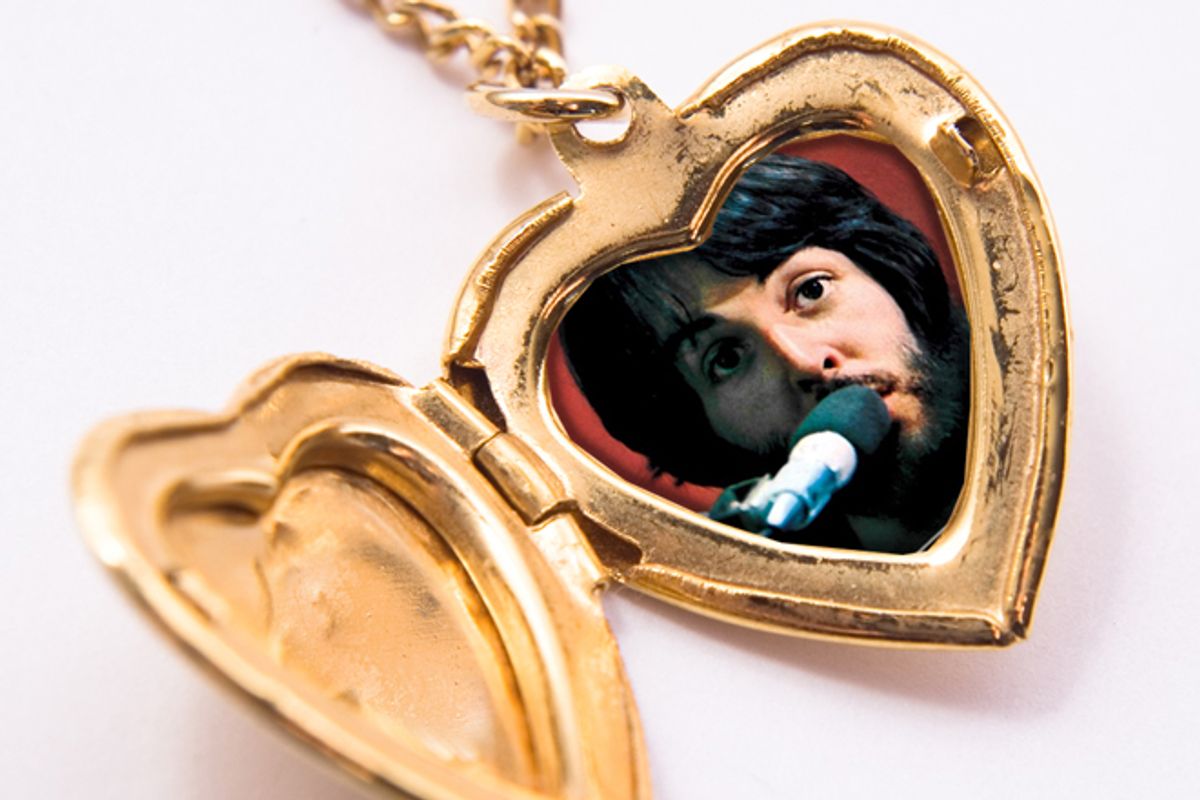 How many more of these stories about dads playing music for their children? Every Father’s Day this story comes around! The kid agreeably listens to the beginning of the Goldberg Variations, and then repairs to his bedroom to play with blocks. The kid, no matter how we spin it, ex post facto, is not the center of the story. The dad is. Did I ever pay attention when I was the kid myself? My dad foisted Beethoven on me when I was in grade school, 9th Symphony. He also had a liking for show tunes. Neither rubbed off on me, not Beethoven, not show tunes.

What I remember is when my parents bought that brand-new album "Abbey Road" and played this LP on their brand-new faux-antique console hi-fi, right about when they were separating. That had some impact. I can remember feeling like “Golden Slumbers,” McCartney’s brief, melancholy lullaby from that Beatles album, was a lullaby for me in a time when I could have used one.

Well, now I am a dad myself, and I don’t want to make my daughter have to listen to stuff she doesn’t want to listen to (though, in fact, I have tried to sneak Sun Ra onto the stereo in her presence). I don’t want her to feel that music is an intergenerational chore. I would do almost anything to make sure that music, for her, is something to love.

And yet, sometimes, it must be observed, the sadder songs are the more genuine songs, or: there are times when the sadder songs come into focus, or: perhaps affirmation in a song is a thing of which one should always be suspect. And so there was a day recently that I was spending the day with my daughter, just me and her, and after all the usual pastimes had been exhausted I said, at last, falling into the trap of so many dads, We still have a few hours here, how about we listen to some music?

I put on "Let It Be." By the Beatles. In fact, I put on the song “Let It Be.” And I’m talking about the version from "Let It Be," the Phil Spector production, not the George Martin-produced single that you can find easily, not the "Let It Be ... Naked" version, which I actually love, too, because I like hearing how guitarist George Harrison thought about what he did on the various recordings. I played my daughter the “Let It Be” I knew best, and which had bludgeoned me much as “Golden Slumbers” had, back in the day, when things at home were coming unglued.

I played the song for her while I was making her a sandwich. It’s really unusual for a 3-year-old to stop moving, unless she’s asleep, and my daughter was not asleep. But she was pretty still. She was transported by the song. Look, you have heard this song 10,000 times, I have heard this song 10,000 times, we are somewhat impervious to the charms of this song, even though it’s a very beautiful song, but when you play it for someone else, in this case someone else who has never heard the song at all, you get back something lost, the original emotional freight of the thing. And with “Let It Be,” which is apparently about a dream Paul had about his dead mother, and, self-evidently, also about the Beatles breaking up, it is hard not to feel that the title, the refrain, is sung with real insight, a real understanding about what it feels like to need the sentiment expressed therein. There really is a lot of misunderstanding and disagreement and dispute in the world, all of it essentially pointless, our time here is so brief, and it would be better if we could all just ...

Now, when you’re 3, a sentiment of this kind has maximum impact when repeated, but it’s repeated a lot here, in the song, over and over, and my daughter picked it up quick, the theme, but not so quick that she didn’t want to hear the song again, and so I played the song again, and finished making the sandwich, and then she wanted to hear it again, and I played it again, and then again, and on the third or fourth repetition, that plaintive, moving quality had begun to empty out again, and I was just hearing the song I had heard 10,000 times, and then my daughter asked for it a few more times. We played it six times. That first day. And we have played it more times since. Papa, play that "Let It Be" song.

What’s it like to have resounding success in the dad-playing-music-for-the-kid sweepstakes? I am not sure I want my daughter feeling like she has to like something just because I played it for her. I would like to provide an opportunity, make the music available, then step out of the process, so that she’s absolutely liberated, so that she has self-determination in the matter of her musical interests. That way she can die for Uncle Rock or Dan Zanes if that is what she wants. But I can’t deny, and especially not here, the sense of pride that I feel when she likes something that I too liked, once upon a time in the suburbs. I hope she can do the same when she’s a parent. Maybe one day she’ll share with me things she likes with the same enthusiasm. And maybe one day I can sell her on Sun Ra.

Music Parenthood Trust Me On This