The birther bully doubles down on Obama lies, insults CNN's Blitzer and makes it clear that he's using Mitt Romney 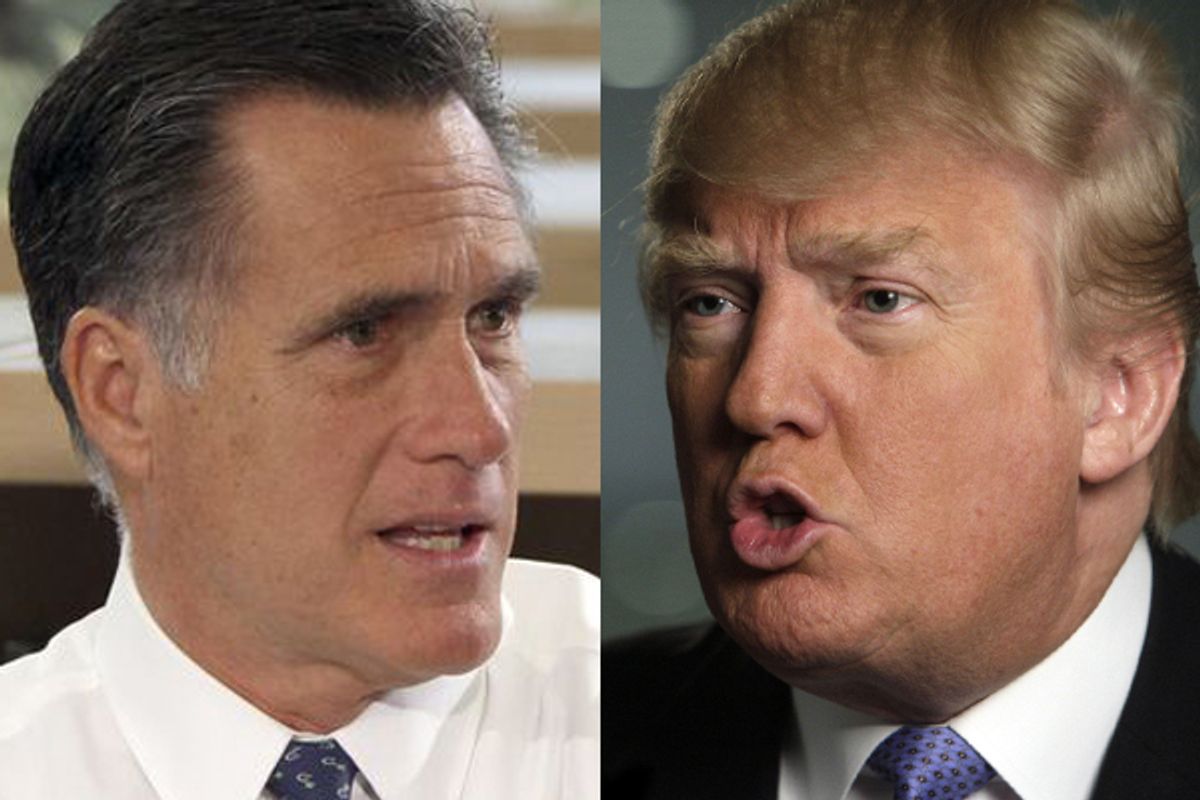 "That was a big steaming plate of shit spaghetti Trump just deposited on CNN for his supposed friend Romney," apostate Republican David Frum wrote on Twitter Tuesday afternoon. I couldn't say it any better.

On the day he's hosting a supposed $2 million fundraiser for Mitt Romney in Las Vegas, Donald Trump doubled down – wait, is it tripled down? – on his birther nonsense in a hilarious interview with CNN's Wolf Blitzer. The normally deferential Blitzer wound up telling Trump: "Donald, Donald, you're beginning to look a little ridiculous."

Obviously Blitzer could have cut "beginning to look a little" from his put-down, but those were harsh words coming from Blitzer. Trump had already insulted the CNN anchor's ratings, telling him, "Frankly, if you would report [the birther conspiracy] accurately, I think you would probably get better ratings than you're getting, which are pretty small."

So Obama surrogates Hilary Rosen and Cory Booker were almost universally denounced for ill-chosen words on behalf of the president, but Trump gets to insult not just Obama but an influential cable news anchor on behalf of Romney with no reprisals? That's the old IOKIYAR double standard at work, but this time, it might actually backfire and hurt Romney.

For his part, Romney refused to either cut ties with Trump or denounce him. And his refusal to do so was a craven exercise in electoral groveling. "You know," he told reporters Monday night, "I don’t agree with all the people who support me, and my guess is they don’t all agree with everything I believe in. But I need to get 50.1 percent or more, and I’m appreciative to have the help of a lot of good people." What else will Romney do to get to 50.1 percent? Stay tuned.

Of course, that's not the first time Romney has refused to denounce or distance himself from a Republican supporter. When Rush Limbaugh called Sandra Fluke a "slut" and a "prostitute," he merely said it was "not the language I would have used." When Ted Nugent said "if Barack Obama becomes the president in November, again, I will be either be dead or in jail by this time next year," Romney simply asked for more civility in politics. When a supporter said Obama should be "tried for treason," Romney didn't challenge her at all and later told reporters: “I don’t correct all of the questions that get asked of me. Obviously I don’t agree that he should be tried.” Romney keeps getting served big fat pitches to let him take a swing at a defining moment of political courage, pitches that he could knock out of the park. He just watches them float by.

Maybe Romney thinks he needs the birther loons to get elected. The base isn't crazy about him. And Salon's Alex Seitz-Wald reveals that Orly Taitz and Joseph Farah are thrilled that Trump continues to advance their cause. But this can't end well. For better or worse, independents are likely to decide this election, and birther nonsense isn't going to win them over.

I've probably reached my own personal low when I'm fact checking Trump's lies, but today he consistently claimed – referencing a Breitbart.com story – that Obama's "publisher" wrote that he was born in Kenya; in fact, the dubious story makes clear it was his literary agent, in a publicity brochure about her clients. (A former agency assistant quickly took the blame for the mistake and said the information didn't come from Obama.)

Also, when talking about the agent's brochure to the Daily Beast, Trump said it was a mistake made by a young man who "didn’t know he was running for president, so he told the truth."  But when dismissing Blitzer's reference to the Honolulu Star Bulletin's Barack Obama birth announcement just days after he was born, Trump argues "many people put those announcements in because they wanted to get the benefit of being so-called born in this country." So his parents knew enough to fake a birth announcement, but the young Harvard Law Review president threw all their hard work away to sell a book? Uh oh, I'm trying to find consistency in a Donald Trump argument. Time to close. Romney owns everything Trump says, and it will cost him in November.

The Breitbart.com empire must be proud Trump is using their story as "proof" of his birther nonsense. Even as they printed the allegation, they stressed that Breitbart himself didn't support birtherism, and they insisted that they only published the story about the agent's brochure just to prove the media didn't vet Obama. Let's get this straight: So they're chiding the media for not publishing something that they themselves believe to be false. That's awesome journalism.

In related news: Regarding the revival of Trump birtherism, I said Friday on "Hardball" that Breitbart's journalistic proteges were "bottom feeders," and one of them quickly proved it.  I appreciate all the support I got on Twitter, but to me it was a dog bites man story, and utterly predictable. (I apologize to dogs everywhere for that unfair comparison.)

I talked about how Trump hurts Romney on MSNBC's "Politics Nation" Tuesday afternoon: