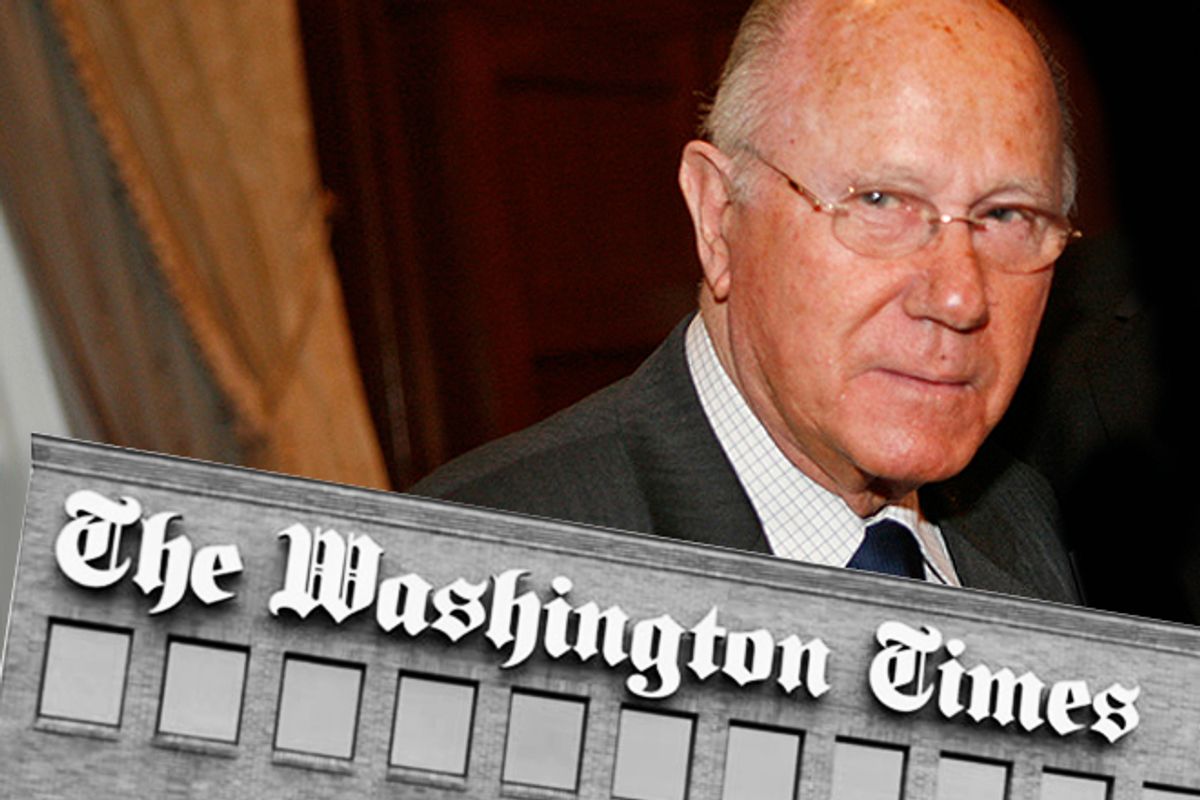 Arnaud de Borchgrave, the ridiculously named eminent former foreign correspondent and editor, has gotten into a spot of trouble recently for plagiarism. De Borchgrave's columns for the Washington Times and the UPI wire service routinely and brazenly borrow passages from a variety of sources, as reported by Erik Wemple in the Washington Post and Mariah Blake here at Salon. The Times management knew there was a problem -- Blake's story quotes some very egregious examples of copy-and-paste abuse -- but after suspending his column for a few months, he was back at work by late March. Once other news outlets reported his plagiarism, de Borchgrave took a "leave of absence" from the paper.

But his columns continued, and continue, to run at UPI, which, like the Times, is owned by the conservative (and culty) Unification Church. A new column went up just yesterday, in fact. It seems to follow proper rules of attribution and quotation marks, at least upon a cursory examination. As does this May 17 UPI column, which avoids being precisely plagiarism through extensive use of quotation marks -- making it incredibly apparent that 90 percent of the column is promotional material from the website of something called the "Challenge Network." (Seriously, nearly every paragraph is made up primarily of quoted material.)

De Borchgrave's defense has been a) that this is all just a big misunderstanding and b) that he is very, very well-respected and accomplished. The "misunderstanding" is that he thought it was OK to take stuff from websites and blogs because, who cares? ("What’s the problem? If memory serves, [it came from] a blog," he told Wemple.) But the real meat of his defense is the second point, as he has repeatedly made clear. Don't you know who Arnaud de Borchgrave is? Here is de Borchgrave's "vindication," as reported by Patrick Gavin in Politico:

Please inform Mr. [Llewellyn] King that I have been the happy recipient of scores of supporting letters from prominent personalities, ranging from Marvin Kalb to Jim Jones, Zbig Brzezinski, Judge Bill Sessions, who understand that inadvertently dropping quotation marks was not plagiarism. The column I wrote yesterday prompted more favorable responses — including Marvin Kalb — from prominent Washington players.

No one who refers to Zbigniew Brzezinski as "Zbig" could possibly be a lowly plagiarist!

He followed up with additional supporting evidence of his innocence:

Yesterday’s column which prompted favorable responses throughout the day yesterday, beginning with Marvin Kalb. If I can pass muster with the dean of American journalism, and scores of other prominent personalities on both sides of the aisle, I can only assume that the nay sayers are not acquainted with all the facts in this case.

De Borchgrave's columnizing is a sort of soft semi-retirement. The Unification Church and his think tank pay him money for little weekly columns that no one will ever read; he gets to pretend he is still an important journalist, and they get to be associated with a respected old man who has very powerful friends. De Borchgrave is -- understandably -- confused as to why anyone would accuse him of plagiarism. He's an award-winning D.C. fixture with a long and storied career, not some undergrad journalism major! Plagiarism is what unimportant people do. Friends of Marvin Kalb make minor attribution errors.

I predict UPI will continue to run his columns, even if the elements in the Washington Times who wish for that paper to be taken more seriously succeed in excising him from their roster of columnists.