Ireland's euro vote: Why it matters 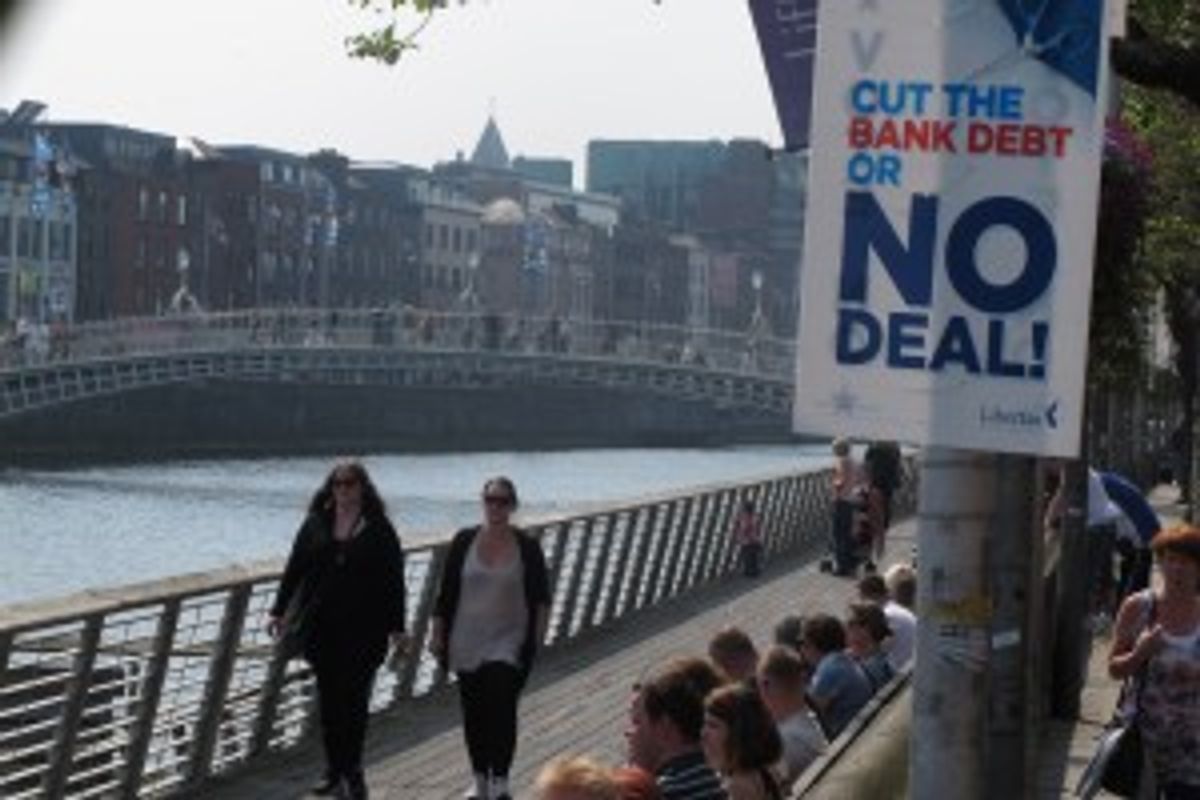 Dubliners bask in the sunshine on the River Liffey on Friday, May 25, 2012, as an anti-EU poster advises voters to reject the European Union's fiscal treaty in Dublin, Ireland. (AP Photo/Shawn Pogatchnik)
--

BERLIN — While the euro zone bickers over how to stimulate growth, the process of implementing the austerity element of Berlin’s vision for Europe grinds on.

So far, five countries have ratified the Fiscal Treaty — the agreement pushed by Chancellor Angela Merkel, and given a preliminary nod in December -- requiring countries to limit their deficits and debt, or else face heavy penalties.

This week the Irish get to have their say. While the other countries simply need parliamentary approval, in Ireland the decision is being made via a referendum. In February the Attorney General advised the government that a public vote was needed, as any significant changes to the constititution in Ireland require a referendum.

Unlike the votes on the Lisbon and Nice Treaties, both of which the Irish rejected on the first go, there is no veto this time. The Fiscal Treaty comes into force when 12 of the 17 euro zone members ratify it.

The latest polls indicate that the Irish are going to vote in favor of austerity, bucking the recent voting trend in Greece, France and even Germany. But that doesn’t mean that the Irish are enthusiastic adherents of Merkel’s belt-tightening fixation.

As much as anything, the Irish referendum could be described as a battle between fear and anger.

Only countries that ratify the Fiscal Treaty will have access to the euro zone’s new permanent bailout fund, the European Stability Mechanism (ESM), which comes into force on July 1. Many Irish voters realize that, even if they hate austerity, they may well need access to the ESM.

In November 2010, Ireland obtained 85 billion euros from the troika of creditors — the European Union, the European Central Bank and the International Monetary Fund.

While the government has professed that it will again seek funding directly from the bond markets at some stage in 2013, that is looking increasingly unlikely. With the current level of uncertainty in the euro zone, Dublin could well be forced to look for a second bailout.

As for the referendum, the “yes” campaign argues that without access to the ESM, future austerity could be even harsher. And they say that many of the requirements of the Fiscal Treaty are already being met as part of Ireland’s bailout program.

They also warn that a “no” vote could undermine the country’s credibility, since Ireland is hugely reliant on foreign direct investment. Those advocating in favor of what they call the “Stability Treaty” argue that Ireland’s recovery would be threatened if foreign investors were spooked by a rejection of the treaty and any implications that it could have for Ireland’s position in the euro zone.

On Sunday night in a televised speech, Prime Minister Enda Kenny warned that rejecting the treaty would bring “uncertainty at a time Ireland definitely doesn’t need it.”

That sense of uncertainty could persuade many to vote yes, even if they disagree with the wisdom of the treaty itself.

“I think this is a lousy treaty,” says Tonra. “It’s bad economics, it’s bad politics and it’s badly written. But what it does do is it gives us access to cash.”

On the flipside of these fears about the future is a profound anger in Ireland over the country’s current predicament.

Many Irish people are furious at their political elite for getting them into this mess, and at the European Union for forcing them to effectively take on the gambling debts of speculators, bankers and property developers.

The bailout became necessary as a result of the previous government’s ill-fated decision to guarantee all of the country’s banking debts in 2008. Those debts turned out to be astronomical, as a result of reckless lending to property developers, and Ireland bailed out the banks at enormous cost.

As the state took on these liabilities, the markets pushed up its borrowing costs, leaving Dublin with little choice but to turn to the troika.

Making matters worse, the state has been overly reliant on real estate transaction taxes. Once the property market crashed, that left a massive hole in public finances. At the same time, there is more demand on the public purse due to soaring unemployment. For 2012, the funding gap is an estimated 13 billion euros.

That deficit comes despite a succession of harsh budgets that have been imposed at the behest of the troika, including billions of euros worth of expenditure cuts and new taxes.

At the same time, the bondholders — who had loaned to the reckless Irish banks — have been paid back billions of euros from the state coffers.

The Irish government’s attempts to persuade the ECB of the need to write down this albatross of bank debt have been to no avail so far. As a result, the public anger is directed not just at their own politicians but at Brussels and Frankfurt, too.

Commentators often point to Ireland as Europe’s austerity success story. Unlike in Spain and Greece, on the surface, Ireland’s economy appears to have returned to growth, albeit modestly, with the EU predicting a rate of just 0.5 percent for 2012. Moreover, official figures show a trade surplus, although this may not be a reliable indicator since it is distorted by the many multinationals based in Ireland who repatriate their profits.

Yet most Irish people don’t feel that things are getting better. The number of those struggling to pay back often-massive mortgages is growing. On Friday the Central Bank announced that one in 10 mortgages are in arrears of more than 90 days. Unemployment remains around 14 percent, up from 4.5 percent just five years ago, and it would be even higher if not for high levels of emigration and the return home of many immigrants who contributed to Ireland’s boom.

The party seen to have caused the mess, Fianna Fáil, was booted from office last year. However, members of the current government, particularly the center-left Labour Party, have seen their support decline, with backers angry at them for continuing the same austerity agenda.

Left-wing nationalist party Sinn Féin, the biggest critic of the Fiscal Treaty — which it dubs the “Austerity Treaty” — has seen its support soar, particularly among working-class voters.

Other opponents include businessman Declan Ganley, who helped defeat the Lisbon Treaty first time around, and smaller left-wing groups, including the Socialist Party.

They warn that the treaty institutionalizes an austerity policy that is not working and will not fix Ireland or Europe’s problems, despite promises to tack on some kind of growth element. “Austerity contradicts growth, austerity kills growth,” says Paul Murphy, a member of the European Parliament for the Socialist Party. He argues that by voting yes, the Irish people would be signing up for even harsher austerity.

The no campaign is calling on voters to not let themselves be persuaded by the warnings of the government about the ESM, arguing that the EU would never allow a member state to be in a position where it had no access to funding.

“The yes side has been overwhelmingly dominated by fear, by really scaremongering people,” says Murphy. “They are painting a bleak Armageddon picture of what will happen if people vote no.”

He and the other opponents claim that Ireland has a veto over the ESM, which has yet to be anchored into EU law, something that requires unanimity among all 27 member states. They argue that the government could say that unless the link between the ESM and the Fiscal Treaty is removed, they will block the bailout fund. However, the government says it has already agreed to the ESM.

Murphy says that if the Irish were to vote no, it would undermine the treaty across the bloc. “If you had a no vote in the only country that has a popular vote on it, it would have ramifications across Europe” and send “a clear message to Merkel and her friends across Europe.”

Yet critics say the no campaign has failed to be convincing on the crucial issue of future funding.

“When it comes to this vital question of: Where is the money going to come from? How do we fund our services? How do we bridge the gap between what goes in and what goes out? I think even fair-minded, objective people would say that they fail rather dismally,” says John O’Brennan, director of the Centre for the Study of Wider Europe at the National University of Ireland, Maynooth, outside of Dublin.

O’Brennan himself is uneasy about the Fiscal Treaty, particularly as it is another sign of a move away from the community model that was a mark of the way the EU operated for so long, whereby institutions such as the European Parliament, Commission and Court of Justice acted as a counterbalance to national interests.

Within the euro zone, the trend has increasingly been for intergovernmental decisions. This allows the bigger countries such as France and Germany to steamroll the smaller peripheral ones. And this, he argues, is leading to an increasing democratic deficit in the EU.

Yet for all that unease and rage, it looks like the great anxiety about how Ireland will pay its way could have the upper hand on Thursday. A number of polls released over the weekend showed that the yes vote was in the lead. However, the large number of people who are still undecided means that there could be a late swing to the no side.

And turnout could be crucial. While polls ahead of the first Lisbon and Nice referendums showed that those treaties would be approved, the anti-Treaty voters turned out in greater numbers.

O’Brennan predicts that on Thursday fear is still likely to trump anger. “Undoubtedly there is an element there that wants to punish the government,” he says. “But that is tempered by the risks.”

“We are very angry, but we are not angry enough that we can vote no.”