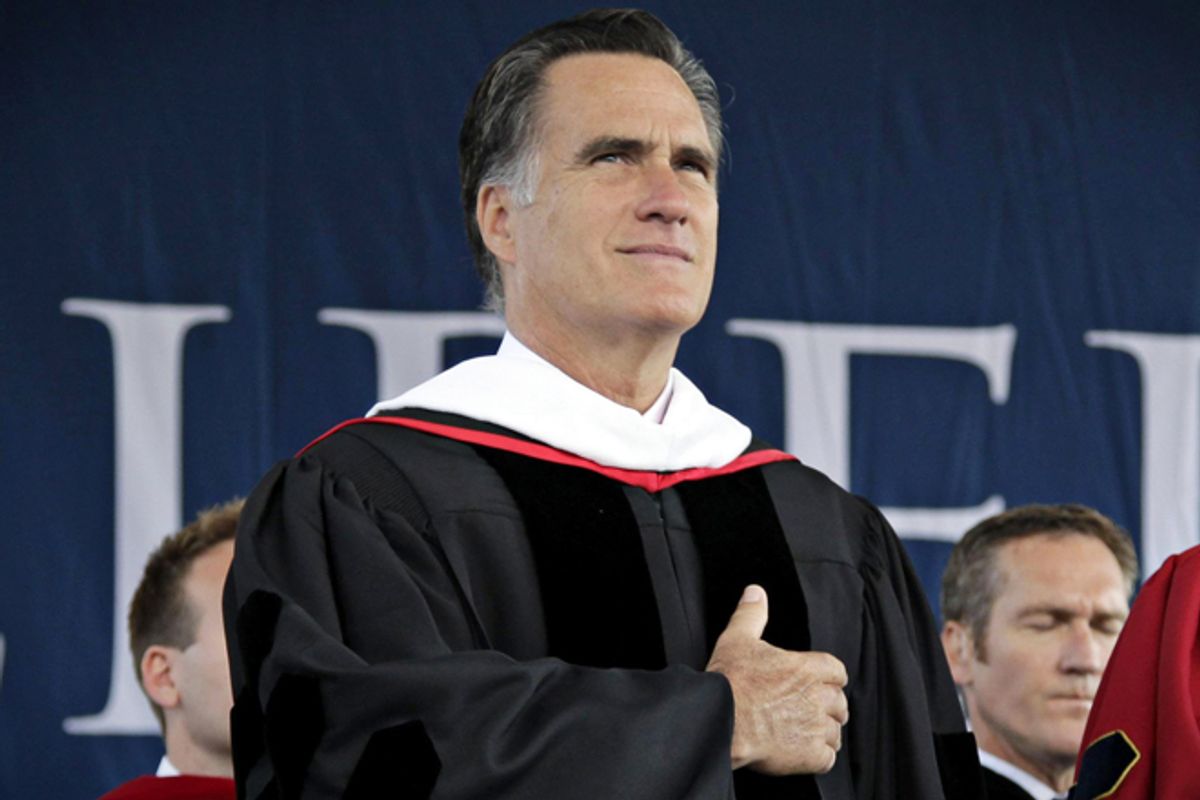 You've got to hand it to Mitt Romney. For someone who's usually as steadfast as a "perfectly lubricated weathervane," in the words of former foe Jon Huntsman, sometimes he's got a lot of brass. This week he released an ad blaming the student debt crisis on President Obama, when in fact out-of-control student loans were gobbling up graduates' paychecks by the time Obama took office in 2009. In fact, Romney himself played a starring role in the crisis, cutting higher-education funding and hiking tuition back when he was Massachusetts governor (or, as he'd rather put it, during the lost years).

Broadcast in New Hampshire, the swing state that also leads the nation in per capita student debt, the ad highlighted "the fact that the president has not been able to help students deal with this crushing debt," according to Romney spokesman Ryan Williams. Unfortunately, the ad used footage of New Hampshire students complaining about their loan burden without their permission, and one of them happens to plan to vote for Obama. "Considering I am not a supporter of Mitt Romney, this is not exactly sitting well with me," said Southern New Hampshire University sophomore Matt Raso. The campaign pulled the footage when a local television station objected, but Ryan Williams told the Associated Press that the campaign plans to run ads blaming the student loan crisis on Obama in other swing states.

That takes a kind of chutzpah Romney rarely exhibits. He won't stand up to birther bully Donald Trump or the misogynist Rush Limbaugh, but he apparently has the cojones to blame student debt on Obama. We'll see how it goes. In fact, American student debt is a scandal in which state and national lawmakers in both parties share some blame. But by far the lion's share of responsibility for the debacle belongs to Republicans. The roots of the crisis go back to California Gov. Ronald Reagan, who imposed the first "fees" on the formerly free University of California system in 1968, declaring "the state should not subsidize intellectual curiosity." As president, Reagan helped nationalize that disdain for well-funded public higher education in the 1980s.

But it took a long roster of Republican governors to turn the problem into a crisis, and Massachusetts Gov. Mitt Romney led the way a decade ago, dramatically slashing public higher-education funding and hiking fees during his one term. According to the Boston Globe, from 2003 to 2007, fees and tuition jumped 63 percent at Massachusetts's once-stellar system of public higher education as Romney slashed state funding year after year, for a total of $140 million, or 14 percent, in four years. Not surprisingly, average student debt in Massachusetts jumped 25 percent while Romney was governor. Between 2001 and 2011, tuition and fees have more than doubled at the state's community college, state university and UMass campuses, but the bulk of the added burden piled up under Romney.

Romney also wanted to spin off the flagship UMass-Amherst and privatize three other colleges, including the medical school, a harbinger of what he says he'll do as president. That agenda failed in Massachusetts, but it would be a shame to give him a second chance as president.

It's tragic that Republicans have become the dismantlers of public universities, since it was Abraham Lincoln who signed the Morrill Act in 1862, creating the system of land-grant colleges that made the U.S. a country of unusually broad opportunity. (Of course, today's GOP has betrayed Lincoln in many other ways.) "Abraham Lincoln is weeping today," university president Graham Spanier told reporters when Pennsylvania's Republican Gov. Tom Corbett slashed Penn State funding by $182 million last year. It was the aggressive expansion of college education access after World War II that helped create the vast American middle class. In 1946, only one in eight college-aged student got higher education; by 1970, one in three did. And the balance of enrollment shifted to public institutions: In the 1940s, most students attended private colleges; by 1970 three-quarters were enrolled in public ones.

Presidents from Truman through Eisenhower and Nixon to Carter continued to endorse and enable broad college access, but the tide began to turn in the 1960s as universities became hotbeds of political protest and the new educated generation began to use its college smarts to question society rather than become cogs in the corporate machine. But we can make too much of Reagan's resentment of Berkeley radicals as a factor in his push to end free UC tuition. He and his backers were anxious to dismantle the public sector and the tax structure that made it possible as well as to privatize all sorts of formerly public institutions, creating lucrative new money-making opportunities for their wealthy friends.

The result: University tuition is up 128 percent nationwide since 1980, the year Reagan became president (and coincidentally, the year I graduated from the University of Wisconsin, when I paid less than $400 a semester). Public university tuition has tripled since then. In that same period, the middle class has shrunk, the poor have gotten poorer and the rich have gotten richer. Is it all connected to our breaking our promises to our kids about higher education? Not entirely, but it's not a random coincidence, either.

The Romney-Reagan approach to higher education has a lot in common with their overall approach to the economy. Let's take jobs as an example. Under Reagan, median wages for the working and middle classes began to stagnate and fall – but household debt began to rise. It was as if the GOP-unleashed private sector figured out how to make money lending families the money that they were no longer making in income. Republicans have the same approach to higher education: They slashed public funding and then let their banker friends "help" students afford higher tuition by lending them the cash to pay for it. Now, of course, the nation's student loan debt is larger than its credit card debt, and graduates leave college carrying about $25,000 in loans. It's like a mortgage, but without the house.

Andrew Leonard wrote a great piece Tuesday about Romney's ties to the for-profit education industry and his commitment to relax Obama administration regulations on that high-profit, low-student-success sector. That's the other key to Romney's higher education agenda: slash public funding, increase the student loan burden and privatize the whole system as much as possible. Leonard explains what's wrong with Romney's priorities more succinctly than I could:

The biggest for-profit schools generate 80 to 90 percent of their revenue from federally guaranteed student loans. Only one out of every ten American college students attends a for-profit institution, but these students account for a quarter of all student debt and almost half of all student loan dollars in default. There’s no sugar-coating it: The booming for-profit industry is one of the worst possible examples of the “free market” in action that one can find in the entire U.S. educational sector. For-profits charge higher tuition rates than their public school competitors, graduation rates are lower, and the entire business would not exist without massive government subsidization in the form of cheap student loans.

Romney is also pledging to undo one of Obama's most progressive reforms: his overhaul of the student loan system, taking banks (and their gouging) out of the middle of the government-guaranteed loan relationship.

It's against that backdrop that Romney is trying to blame Obama for the student loan crisis. It won't work. Democrats need to pay much more attention to Romney's higher education record in Massachusetts. It's no wonder he doesn't like to talk about those years.