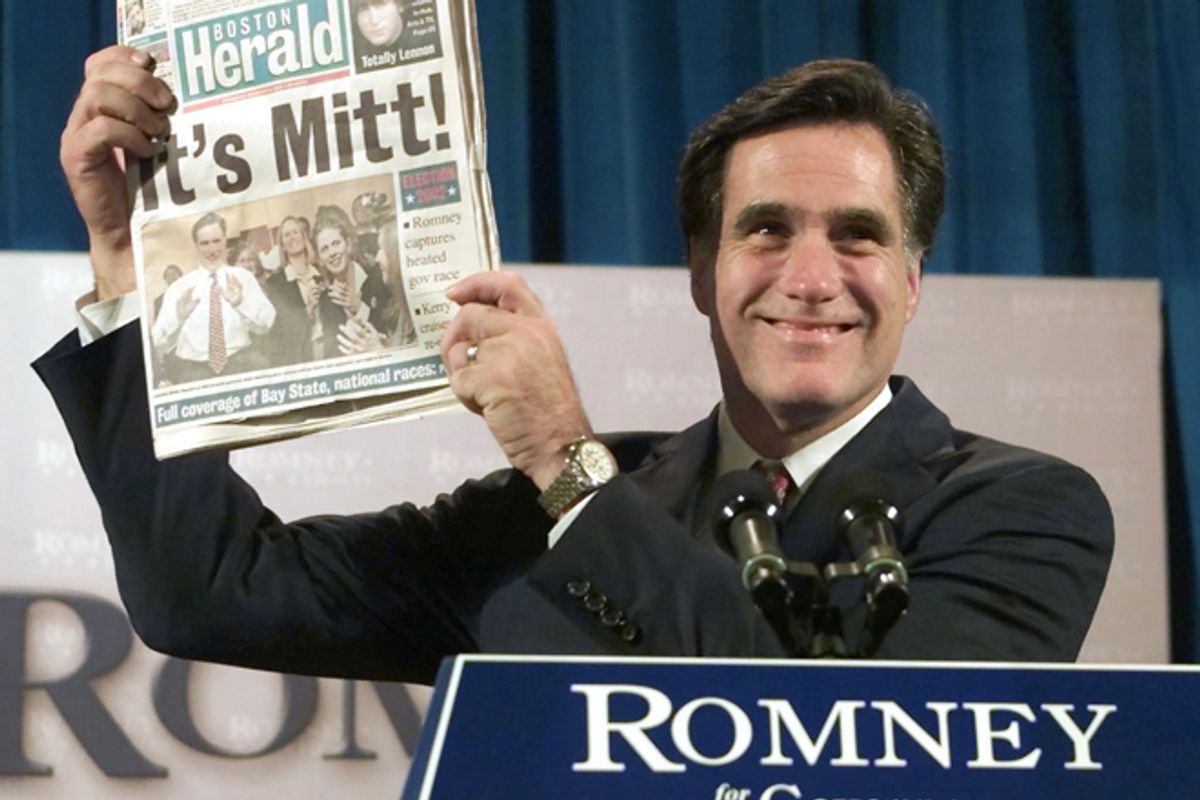 Mitt Romney holds up a Boston newspaper announcing his victory in the Massachusetts Governor's race in 2002. (Reuters/Jim Bourg)
--

Get ready to hear a lot about Massachusetts in the days and weeks ahead. It’s the next component of Mitt Romney’s resume that the Obama campaign plans to focus its attacks on, as ABC News reports:

Team Obama will point to Romney’s rhetoric on job creation, size of government, education, deficits and taxes during the 2002 gubernatorial campaign and draw parallels with his presidential stump speeches of 2012. The goal is to illustrate that Romney has made the same promises before with unimpressive results, officials say.

Undermining Romney’s perceived competence as an economic policymaker is, as Greg Sargent keeps explaining, critical to Obama’s November prospects. The Romney formula depends on economically anxious swing voters simply wanting to throw the incumbent out, a strategy that could well produce a victory in the current climate. Obama’s mission is to embed context about Romney’s own background and values into those same voters’ minds – to give them pause before simply checking off his name as a suitable vehicle for their frustrations.

The question, obviously, is whether voters will buy into the idea that Romney was a lousy governor – and, even if they do, if it will end up affecting their decisions. Two relatively recent campaigns offer some conflicting lessons.

Democrats would ideally like to do to Romney what Republicans did to the last Massachusetts governor who sought the presidency: Michael Dukakis in 1988. About the only attack that anyone remembers from that campaign was the racially inflammatory Willie Horton ad that an “independent” pro-George H.W. Bush group ran.

That spot highlighted a specific incident from Dukakis’s governorship, but what’s often forgotten is the degree to which the Bush campaign made Massachusetts the centerpiece of its efforts. A wave of attack ads in the summer and fall portrayed Dukakis’s gubernatorial tenure as a festival of tax hikes, rampant spending, criminal coddling, environmental pollution and general incompetence, each ending with the tag line: “Michael Dukakis says he wants to do for America what he’s done for Massachusetts. America can’t afford to take that risk.”

(A good compilation of many of the Bush attack ads can be found here.)

Bush personally paid two high-profile visits to the Bay State, one to tour Boston Harbor – then known as the dirtiest harbor in the country – and the other to receive the endorsement of the Boston Police Patrolman’s Association.

''My opponent will say that he will do for America what he's done for Massachusetts,” Bush said during the harbor swing. “No, that's why I fear for the country.''

It’s hard to quantify, but the relentless attacks clearly damaged Dukakis, who enjoyed a lead of 17 points just after the July Democratic convention only to find himself trailing by the same amount in the campaign’s closing weeks. The numbers tightened in the final days, but Dukakis still lost by eight points. Exit polls found that nearly half of Bush’s voters said they supported him mainly to stop Dukakis. “The distortion of my record contributed a great deal to my defeat,” Dukakis acknowledged the morning after the election.

Four years later, though, Democrats nominated another governor with a record the Bush team believed was ripe for exploitation: Bill Clinton, whose state of Arkansas ranked near the bottom in a host of important-seeming statistical categories.

Of course, Clinton had other baggage too, mainly involving “character” issues and widespread concerns about his honesty, and the Bush campaign spent plenty of time highlighting those issues. Bush also tried to play up the tax increases that Clinton had signed as governor, but the attack was compromised by his own infamous “Read my lips!” flip-flop.

In the final weeks of the race, though, with polls showing Clinton comfortably ahead, Bush began criticizing Clinton’s gubernatorial record much more aggressively. In an October 19 debate, for instance, Bush replied to Clinton’s vow to be solely responsible for his administration’s economic policy by saying:

Clinton soon interrupted with this:

The Arkansas attacks never got Bush anywhere in ’92. That Clinton was prepared to counter dire-seeming statistics with happier ones of his own surely helped, as did his salesmanship skills. Perhaps a different candidate wouldn’t have defended himself as ably. On the other hand, it may also be that voters, unnerved by what seemed to be a rotten economy, simply decided to tune Bush out and to regard his attacks as desperate excuse-making and blame-deflection.  That’s exactly what Romney’s campaign is counting on happening this year.