Mitt Romney isn't his only friend in the Grand Old Party. Meet the other Republicans whom Trump backs 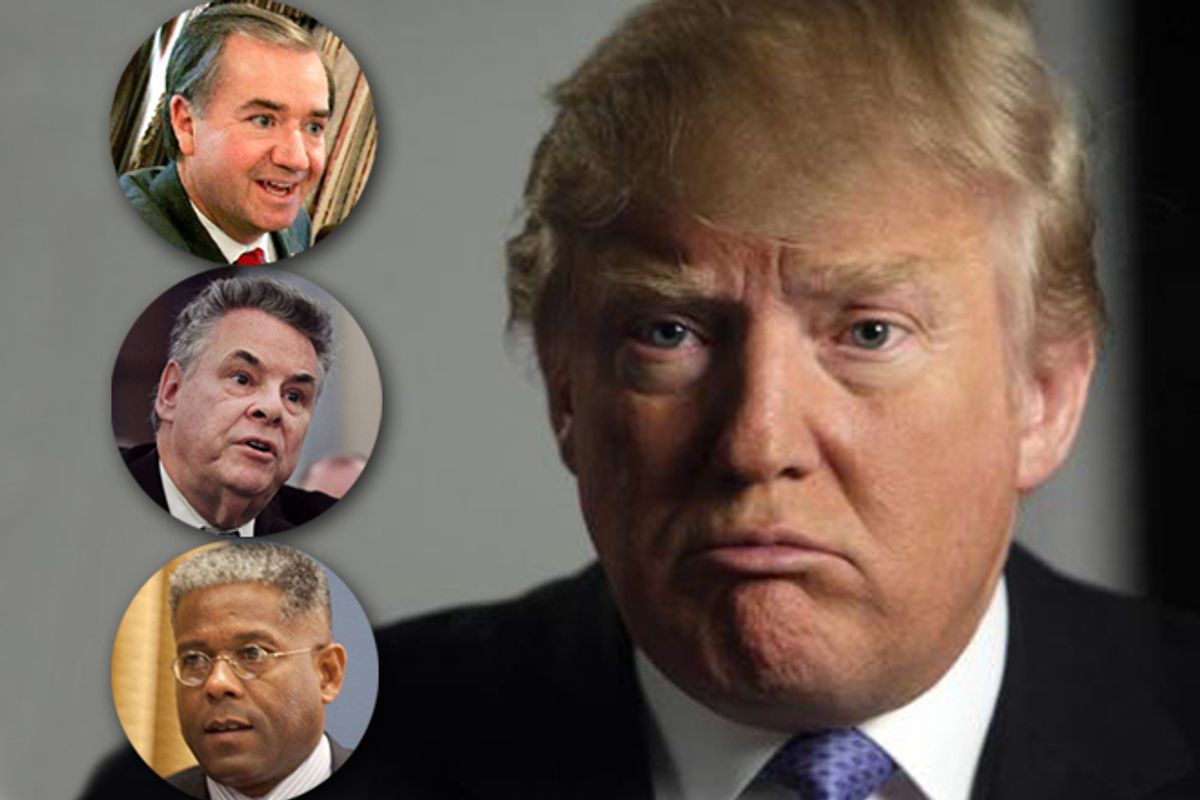 While Mitt Romney is catching plenty of flak for standing by Donald Trump as he tells anyone who will listen that Barack Obama was born in Kenya, the presumed GOP nominee is hardly the only candidate who has benefited from Trump’s starpower and deep pockets.

In fact, even though virtually every Republican presidential candidate kissed Trump’s ring, it’s further down the ballot where he has had the biggest financial impact. He gave $5,000 to Connecticut GOP Senate nominee Linda McMahon last year and $30,800 to the National Republican Senatorial Committee (NRSC), the campaign arm of Senate Republicans, which did not return a request for comment.

On the House side, he gave $2,500 to Rep. Ed Royce’s, R-Cal., reelection effort; another $1,000 to Tea Party favorite Rep. Allen West, R-Fla.; and $2,000 to Rep. Peter King, R-NY. And while he’s given to Democrats in the past, including Senate Majority Leader Harry Reid, all of Trump’s donations in this year’s election cycle were to Republicans, including Romney ($2,500) and disgraced former New York Rep. Chris Lee, who resigned after being caught looking for sex on Craigslist. (Trump gave $500, which appears to have been returned.)

Trump has been especially involved with West, whose campaign did not return a request for comment. The “Apprentice” star appeared with the congressman at a Tea Party rally in Florida last April, and West even said he was open to being Trump’s vice presidential pick if the real estate mogul somehow won the GOP nomination. West told Newsmax at the time that he hoped Trump was “very serious” about his presidential bid. West also accepted $2,500 from Joseph Farah, the birther editor of World Net Daily, in 2008. (It's Farah's only political donation the past three cycles.)

But perhaps no candidate has closer or deeper ties to Trump than McMahon, who also did not immediately respond to a request for comment. McMahon made her money through the WWE professional wrestling league, which her husband founded.

Trump has been involved in the sport for years, which suits his flamboyant and phony image. Wrestlemania IV and V were both held at Trump Plaza, and a video that made the rounds on Twitter yesterday shows Trump tackling Vince McMahon at Wrestlemania 23. Trump and two beefy wrestlers hold down and restrain McMahon before shaving his head to wild cheers from the packed arena.