A new study says today's writers are influenced by authors of the present, not the past 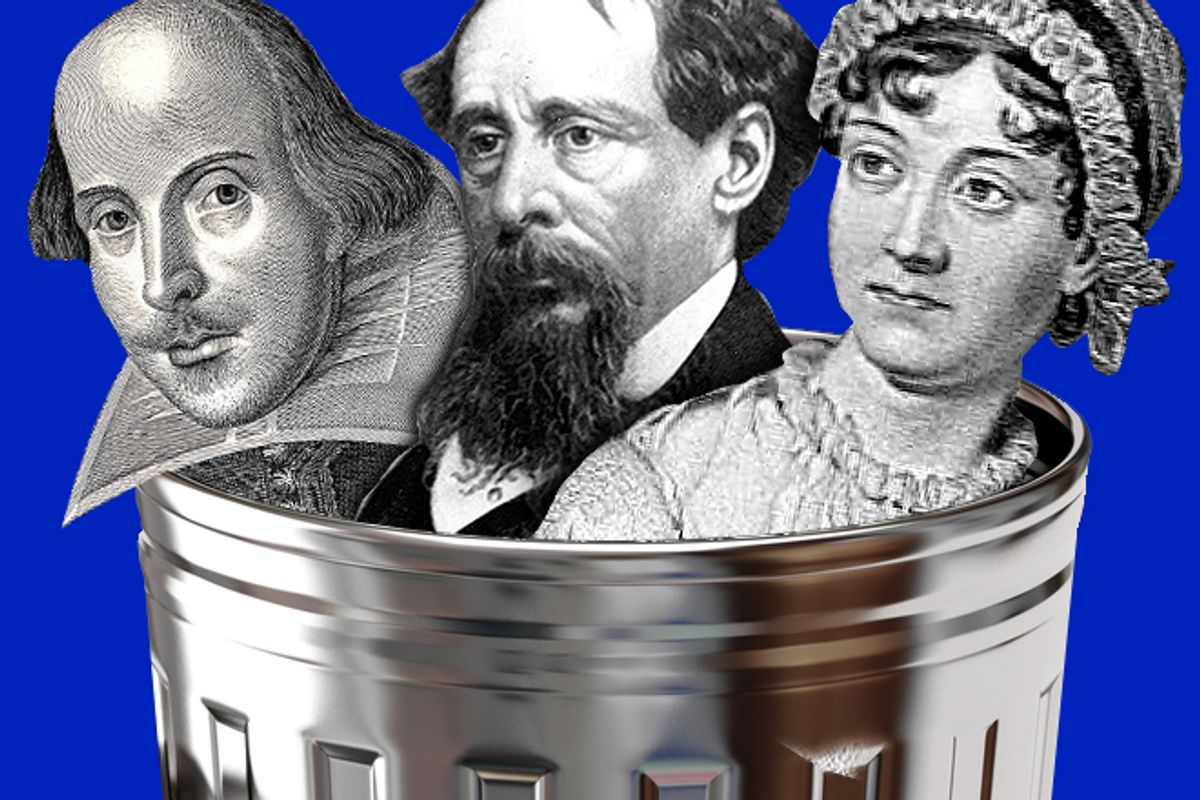 You have only to look at the one-star reviews given to classic novels on Amazon.com to recognize that quite a few contemporary readers find these immortal works of literature unreadable. Stories that don't begin with a Hollywood-style bang or that skimp on action are dismissed as "boring." Subtleties of character and context are overlooked. But more than anything else, the one-star brigade hates the prose of the past. Any writer whose sentences contain multiple clauses typically gets labeled "wordy" or "flowery" (a term that only seems to be used by people who don't know what it means).

Surely only ignoramuses and resentful students slogging through their required reading feel this way, right? Not according to a new study led by the chair of the mathematics department at Dartmouth College, Professor Daniel Rockmore. In "Quantitative Patterns of Stylistic Influence in the Evolution of Literature," an article published in the journal The Proceedings of the National Academy of Sciences, even today's literary writers have little use for the classics. They are, the study asserts, much more influenced by their peers than they are by the most revered authors of earlier centuries. And these researchers, being mathematicians, have the numbers to prove it.

If it strikes you as peculiar to see numbers guys (the article's authors are all men) weighing in on literary style, then you haven't been keeping up with the latest developments in humanities research. Crunching data -- especially the vast number of texts that have been converted to a digital format by such programs as GoogleBooks -- is all the rage in liberal-arts academia these days. Among other interesting recent projects, researchers have graphed the emergence and usage of particular words or phrases by date, looking for insight into how certain ideas developed historically.

The Dartmouth research belongs to the relatively established field of stylometry, the study of linguistic patterns in texts. Digitally-aided stylometry is most familiar as a means of establishing the authorship of contested works: Plays or poems allegedly written by Shakespeare, say, or Christopher Marlowe. This involves comparing a small number of works to each other and looking for internal consistencies and differences. Most authors use detectably distinctive language patterns, even after you eliminate such obvious giveaways as content. In fact, stylometrists often assert that tracking "content-free" words -- such as conjunctions, like "and," and prepositions, like "above" -- is the most reliable way to reach what the Dartmouth researchers call a "useful stylistic fingerprint" for any given author.

It's more unusual, however, to crunch a large body of texts written over a long period of time by many different people. The Dartmouth study analyzed multiple works by 537 authors who wrote English language texts published since 1550. Comparing them to each other, they found, not surprisingly, that authors from a given historical period have more in common with each other stylistically than they do with authors from the past (or future). They also found that the more recent a work is, the more "localized" its stylistic brethren are in time. An author from, say 1850, will have more in common with an author from 1800 than an author from 1950 will have with an author from 1900.

All of this makes sense; language changes over time, and during the 20th century, with the advent of broadcast media and other mass-communications technologies, it changed faster than ever. Today, thanks to the Internet, slang, jokes and new figures of speech seem to disseminate instantaneously. Suddenly, everyone's talking about frenemies and saying, "Do not want!"

Where the Dartmouth article makes a big leap, however, is in claiming that contemporary authors are less "influenced" by authors of the past than they are by those of their own time. Furthermore, they propose a reason: The explosion in the number of published books in the past century or so. Titles by contemporary authors are in the (vast) majority. By this logic, with "even more authors to choose from and selection dominated by contemporaneous authors," writers, like everyone else, are less likely to read the classics.

There are so many wobbly assumptions built into these interpretations that they could be used as an illustration of the dangers of empirical hubris: Having a lot of numbers and equations is not the same as knowing what they mean, especially in such a complex and meaning-rich field as literature. The Dartmouth researchers seem somewhat aware of this problem -- they suggest that the dramatic decrease in the influence of the past on 20th century literature might be due to the Modernist movement, which advocated just such a break with tradition. (Note: The texts used in the study were taken from the public domain, and so included nothing published after 1952, a time when Modernism still ruled the literary roost. For all we know, postmodernism might cause the math department's processors to melt down.)

First, there is the assumption that a lack of stylistic similarity is the same thing as a lack of influence. This is manifestly untrue. A stylometric analysis of, say, the prose of John Irving, for example, would probably not show much resemblance to that of Charles Dickens; one author is a contemporary American and the other a Victorian Briton. But Irving worships Dickens and cites him as his master and model in every interview he gives. He writes in the voice of a modern American, but that doesn't mean he wasn't profoundly influenced by Dickens's novels. On the pop fiction front, Helen Fielding doesn't write a bit like Jane Austen in "Bridget Jones's Diary," so does that mean the founding text of chicklit simply couldn't have been influenced by "Pride and Prejudice"? Please: Fielding's novel is a retelling of the Regency classic in a modern setting.

Also built into that first assumption is the peculiar notion that the only influence on a writer's style is the work of other authors. Most writers aspire to represent the speech of their own time. They listen to people talking at home, in the street and in the media. If the authors of a particular historical moment tend to sound similar, it is most likely due to this common influence rather than their influence on each other. It would be absurd for, say, Jonathan Franzen to write about 21st century Americans in the prose style of Anthony Trollope, but that doesn't mean that Trollope's approach to "the way we live now" (to borrow the much-quoted title of his best-known book) hasn't infused Franzen's ambition to write sweeping, often satirical "social" novels set in the present day. In fact, it's precisely his desire to emulate Trollope that makes it impossible for Franzen to write prose like Trollope's; the way we live now can't be described in the language they used then.

Finally, the authors of the Dartmouth study seem to believe that readers choose their books by making a random selection from the pool of potential candidates. If there are more books by contemporary writers, then probability dictates that a reader is more likely to pull a recent title from this grab bag. True, the abundance of choices can be overwhelming, but it can just as easily lead someone to devote their precious reading hours to the tried and true. There is no reason to conclude that because contemporary writers differ stylistically from the authors of the past, they therefore must never have read those authors. I realize that my evidence here is anecdotal, but I'm willing to bet that I know a lot more novelists than the Dartmouth math department does, and as a rule they read far more of the classics than the average civilian. They want to know what people are writing and reading now, of course, but every author also wants to know what kind of books stand the test of time -- because most authors want to write one.

As I mentioned earlier, language changes, and authors who aspire to lasting renown are sometimes vexed by these changes. In 1712, Jonathan Swift published a letter to the Earl of Oxford (then Lord Treasurer) urging the establishment of the English equivalent of the Académie Français: a body authorized to dictate the correct form and usage of the language. If "Court-Fops, half-witted Poets, and University-Boys" could be prevented from constantly introducing "affected Phrases, and new, conceited Words," Swift argued, then there might be found a way to "fix" English forever. If not, "How then shall any Man who hath a Genius for History, equal to the best of the Antients, be able to undertake such a Work with Spirit and Chearfulness, when he considers, that he will be read with Pleasure but a very few Years, and in an Age or two shall hardly be understood without an Interpreter?"

English has no academy, and Swift was both right and wrong. We still read him today, and we have even concocted the "new, conceited" word "Swiftian" to describe the ferocious mode of satire we identify with him (though we now give "conceited" a different definition). But then there are those one-star Amazon reviews for "Gulliver's Travels": "I had to give up on this book about 2/3 of the way through," one reader complains. "I was just getting too tired of looking up 'Old English' words as I read." No doubt this protest would have confirmed Swift's generally low opinion of the human race. Prose styles come and go, but idiots will always be with us.

"Quantitative patterns of stylistic influence in the evolution of literature" by James M. Huges, Nicholas J. Fotia, David C. Krakauer and Daniel N. Rockmore in The Proceedings of the National Academy of Sciences (abstract)

"A Proposal for Correcting, Improving and Ascertaining the English Tongue" by Jonathan Swift