I worked for him briefly -- and the FBI asked me about his case. Why I'm glad he's not going to jail 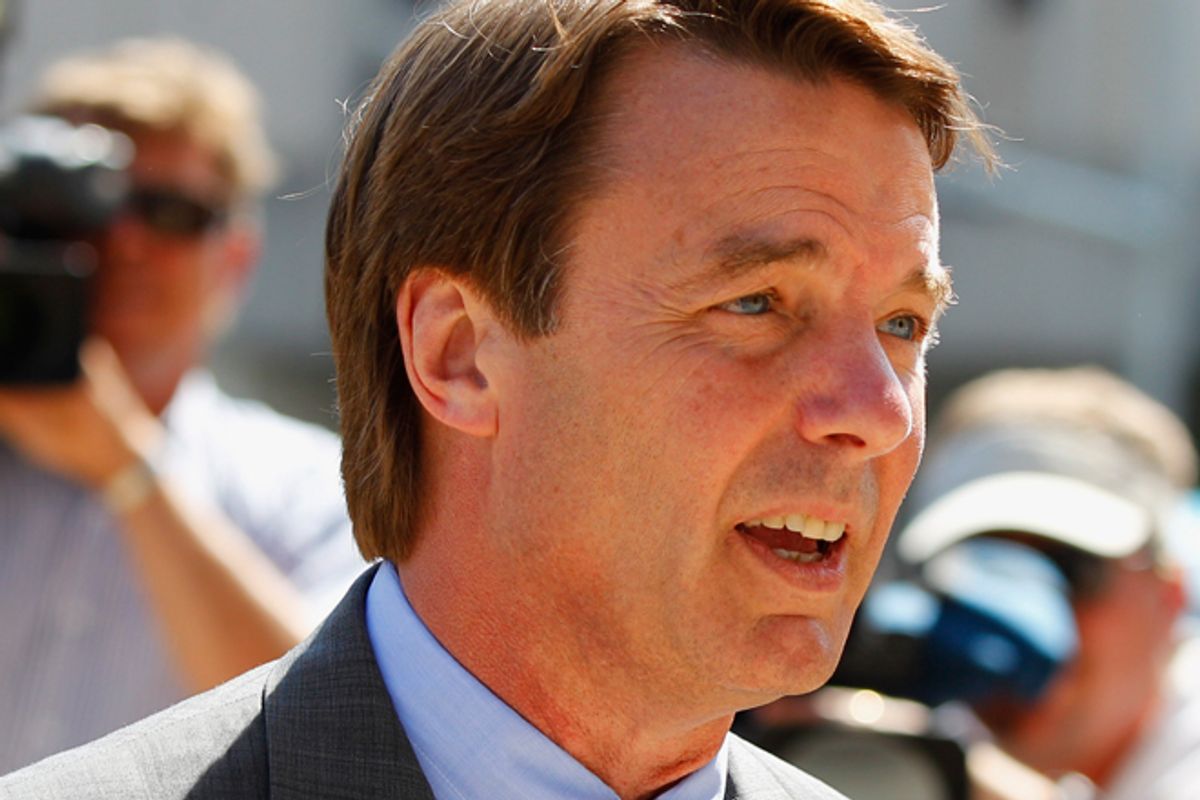 Few things are more disconcerting than answering your door wearing shorts and a tank top and finding be-suited FBI agents sticking badges in your face and asking to speak to you about a former, remarkably brief job you held three years prior. As soon as the agents dropped the name “John Edwards,” I figured that no matter what this was about, I might as well let them in and be as cooperative as possible. After a few questions about my two weeks on the campaign, it became obvious to everyone in the room that they were wasting their time with me because I had literally no information whatsoever about the campaign’s finances, much less any potential financial irregularities, leaving me nearly apologizing to them as I let them out of the apartment 10 minutes later. All I could do after such a weird event was to hop on chat to tell a friend, “Huh, I think maybe John Edwards is in trouble for campaign finance law violations.”

It all seemed very serious to me at the time, which is why I was astonished when the charges finally emerged. It seemed that federal prosecutors desperately wanted to find a way to legally punish Edwards for adultery, and their only hope of doing that was to reclassify hush money paid by private Edwards supporters directly to Rielle Hunter and Andrew Young as a campaign contributions, even though the money didn’t go to the campaign and “hush money for mistresses” has never before been treated like a traditional campaign expense. Luckily, the jury seems to have seen through the ruse, finding Edwards not guilty of one charge, and drawing a mistrial on the rest.

With the news of Karl Rove crowing about how he intends to spend $1 billion in untraceable funds to beat Obama in 2012, it looks particularly ridiculous for the government to waste resources on a showboat prosecution. Even the conservative news magazine National Review had to denounce the prosecution as a waste. John Edwards has been disgraced, humiliated and run out of politics. Bringing the full force of the law down on him on top of it all just seems greedy.

It’s become customary in politically obsessed circles for observers to preen about how they knew that Edwards was bad news all along. His lawyerly ways! His sentimental stories about growing up working class! His hair! How could his silly supporters not see him for the philandering phony he so clearly was?

Of course, a quick perusal of the John Edwards of 2007 demonstrates that this sort of hindsight owes more to revisionist wishful thinking than a correct assessment of the evidence at the time. Back then, the other potential Democratic nominees, Hillary Clinton and Barack Obama, were widely and correctly perceived as timid centrists who had a knee-jerk tendency to run from conflict the second conservatives ruffled their feathers. Edwards, on the other hand, spoke convincingly of how change couldn’t come from  “negotiation and compromise,” arguing that the idea that corporate interests would voluntarily give away their power is “a fantasy.” Long before the economic crash and Occupy Wall Street forced major Democratic politicians to address the question of growing inequality, Edwards’s famous “two Americas” rhetoric helped force the issue onto the table. Occupy boiled it down to the 1 Percent vs. the 99 Percent, but back in 2007, Edwards was taking cracks at “the very rich vs. everyone else.”

In the rush of headlines about Edwards’s despicable sexual behavior, what’s forgotten is how much his campaign haunted the primary contest between Clinton and Obama long after he dropped out. An early push in the campaign season from Edwards on healthcare reform set the tone for the rest of the election season on this issue. Edwards put out a plan for healthcare reform before the other candidates, forcing the other candidates to release competing plans that were likelier farther to the left than they were comfortable promising. It’s arguable that without the primary season pressure from the Edwards campaign, the initial gambit of the Democrats in the healthcare reform battle -- one that included a public option -- wouldn’t have been as strong, which would have meant an even weaker bill than the one that eventually was pushed past conservative Democratic opposition.

Because of this, no one was hurt worse by the revelation that Edwards was cheating on his well-loved wife than his most ardent supporters. If he’d been outed sooner, he would have destroyed not just his own candidacy but all the hard work in getting income inequality and progressive health care reform into the 2008 campaign. For those who take those issues very seriously, this felt less like a boneheaded mistake and more like a betrayal.

But being weak-willed and disappointing your supporters can’t be treated like a crime, or else most of D.C. should be yanked from their cocktail parties and tossed into the clink. Even those who’ll never be able to forgive Edwards for nearly destroying his legacy should be grateful for the good sense shown by the jury today. Let’s hope the Justice Department takes their lead and lets this one go.