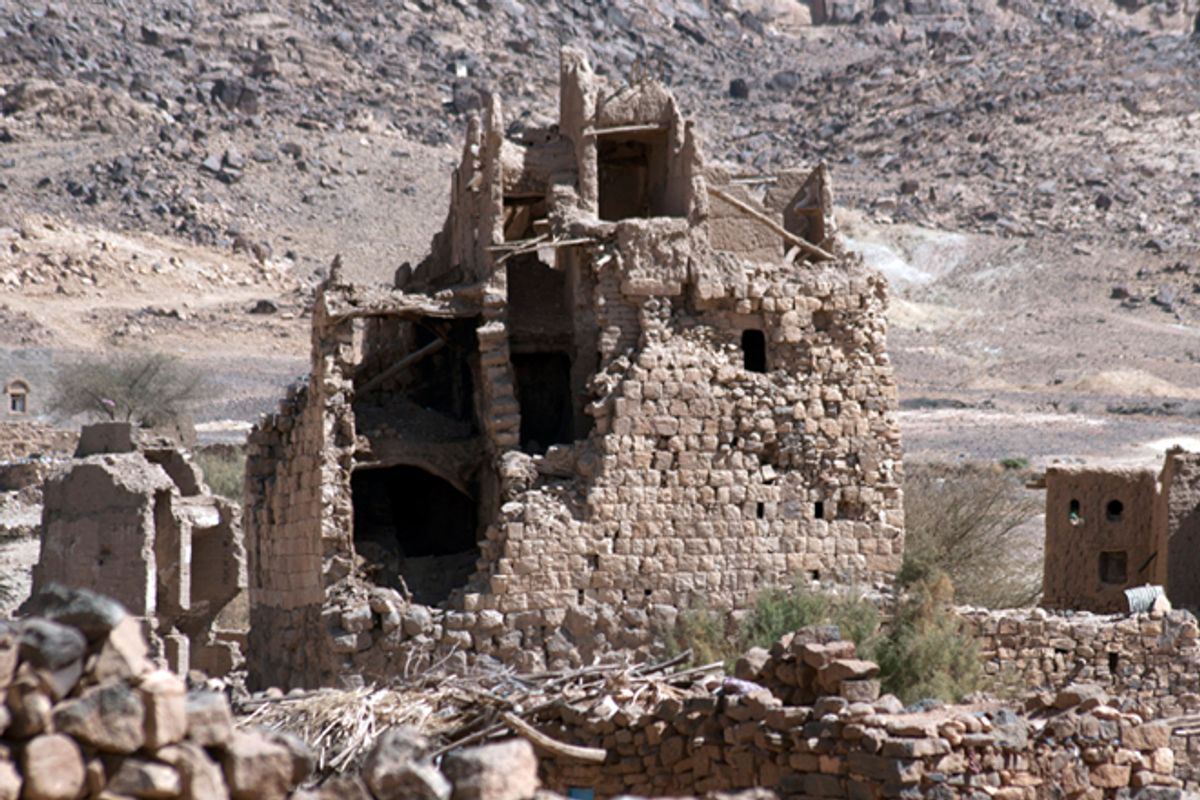 During meetings with young, reform-minded activists last month in Yemen, the talk invariably turned to accelerating CIA drone strikes against Islamist militants, and the temperate voices quickly turned angry. The youths’ comments underscored how swiftly the U.S. is losing hearts and minds as it battles Yemen-based al-Qaida in the Arabian Peninsula (AQAP) and its local affiliate, Ansar al-Sharia.

“These drone strikes are stupid policy,” said a secular female activist from Taizz, a city that is considered Yemen’s intellectual capital. “Every time they kill Yemeni civilians they create more hatred of America.”

The youth activists sounded a lot like residents in a new Washington Post feature about how the dramatic increase in U.S. drone strikes in southern Yemen — at least 21 attacks since January — is breeding anger and sympathy for al-Qaida. The Post primarily quoted tribal leaders in areas under attack or residents whose loved ones were killed by drones. In contrast, the activists I met hailed from cities far from the militant safe-havens that drones are targeting. Most were political moderates eager for reforms — just the sort of potential leaders the U.S. should be cultivating as it seeks to steer Yemen toward a rights-respecting democracy after three decades under its autocratic former president, Ali Abdullah Saleh.

The U.S. has good reason to be concerned about armed Islamist groups in Yemen. This month, AQAP tried for the third time since 2009 to blow up a U.S.-bound jetliner. Ansar al-Sharia claimed responsibility for last week’s attack on a military parade rehearsal that killed nearly 100 soldiers in the heart of Sanaa; it also controls cities and towns in southern Abyan province, where it has imposed a brutal interpretation of Islamic law.

The U.S. also is aware of the need to strike with caution, whether with drones, missiles or conventional aircraft. After a couple of horribly botched U.S. drone and cruise missile strikes in 2009 and 2010, many tribal leaders and residents no longer allege a broad pattern of civilian casualties. That gives credence to the U.S. diplomat in Yemen who told me recently that “the notion of trigger-happy Americans sitting around in some remote room with their computers, killing Yemenis without thought to whether they are genuine militants, is utterly false.”

But solid information is hard to find because Washington shrouds its drone program in secrecy, leading to widespread speculation over how many civilians have been killed and in what circumstances. States are obligated under international law to conduct targeted killings only under circumstances permitted by international human rights or humanitarian law, and they are required to investigate credible allegations of unlawful attacks. While the U.S. provides minimal information on drone strikes by the U.S. military, it has refused to provide almost any details on drone attacks under CIA command, citing the need to respect the covert nature of the agency. In this climate, even one confirmed civilian casualty can sway public opinion against the U.S. Some Yemenis who did not take issue with the U.S. drone strike last September that killed Anwar al-Awlaki, the radical Yemeni-American cleric whom the Obama administration called an AQAP operative, remain furious over another U.S. airstrike a month later that killed Awlaki’s teenage son Abdulrahman, also a U.S. citizen. In particular, they point to the U.S. failure to officially acknowledge the boy died in a U.S. attack.

AQAP and Ansar al-Sharia also kill inside Yemen, but they mostly target Yemeni security forces or foreigners. Moreover, their propaganda machine remains resilient. When Ansar al-Sharia blew up parading Central Security force members on May 21 in Sanaa, it brazenly claimed it was avenging deadly attacks by that unit on protesters during last year’s uprising — attacks that risk going unpunished thanks to a U.S.-backed Yemeni law granting immunity to Saleh and all his aides in exchange for the president’s resignation.

To win Yemenis’ confidence, the U.S. should transfer command of all drone strikes from the CIA to the U.S. military and provide a detailed rationale of why its targeted killings in Yemen are legal under international law. It should insist on more transparency as well from the U.S. military’s Joint Special Operations Command, which also reportedly conducts drone strikes in Yemen under a veil of secrecy approaching that of the CIA. That will not only give Yemenis information about U.S. strikes but also allow them to seek redress for any unlawful attacks.

The U.S. also should do far more to show Yemenis that it cares not just about defeating Islamist militants but also about putting their country back on track. Yemen is still reeling from the yearlong uprising that removed Saleh but left his brutal security forces intact and allowed already acute poverty, unemployment and internal displacement to reach crisis proportions. At a meeting last week of the Friends of Yemen, a group of western and Arab states seeking to jumpstart the Yemen economy, the U.S. pledged $80 million — a sum that seems like pocket money compared to the $3.25 billion promised by Saudi Arabia.

Until the U.S. takes such steps, Yemenis are likely to become increasingly disinclined to give Washington the benefit of the doubt — much to the delight of groups such as AQAP.

Letta Tayler is a senior terrorism and counterterrorism researcher at Human Rights Watch with an expertise in Yemen.